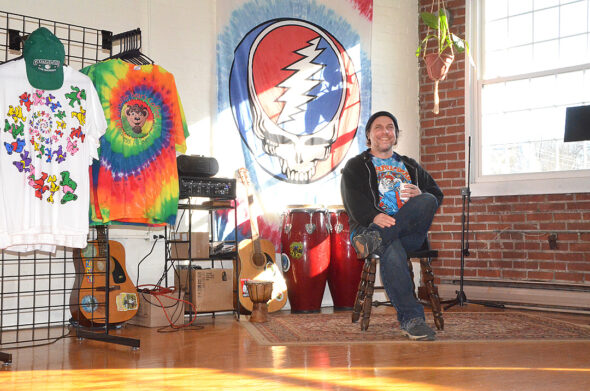 As the seasons change, so do some of the village’s favorite businesses: this fall found many local stores shaking up their way of doing things, with some moving, others expanding and still others altering their business models.

On the second floor of 108 Dayton St., visitors may find themselves drawn by the aroma of freshly brewed coffee. The interior of Brother Bear’s is packed with coffee and coffee paraphernalia, as well as tea, clothing and more, all framed by exposed brick and hardwood floors. Free samples of coffee and tea are on offer, served up by Brother Bear’s owner and operator, Patrick Harney, who hopes to entice visitors into purchasing a bag to take home.

Brother Bear’s has been a staple of the village since its foundation in 2003. The business grew out of the now-defunct Back Chat Cafe, which was located where Asanda Imports is now, and began as a roaster that provided coffee to more than 85 locations.

In 2009, Brother Bear’s opened its coffee shop on Dayton Street; that location is now home to the forthcoming Ohio Coffee Co. After Harney sold the coffee shop, it became the Spirited Goat, and Brother Bear’s shifted focus back to supplying other local businesses — including Tom’s Market, Sunrise Café, the Emporium and the Clifton Mill — with locally roasted wholesale coffee.

Though he remained connected to the community through coffee sales, Harney said he had misgivings about the decision to change focus.

“I regretted selling the coffee shop,” Harney said. “I want to learn from my past mistakes and try not to do them again. … I kept pushing forward.”

Brother Bear’s moved to its current location in the first week of August and held its grand opening in September. With the new move, Harney aims to resurrect the elements of the previous iteration of the business that relied on a physical location. The store hosts an open mic on Fridays from 5 to 7 p.m., offers Brother Bear’s Coffee merchandise, serves free samples to all visitors and now incorporates tea — and poetry by Phoenyx Fyre.

Harney’s original intent was to reclaim Brother Bear’s previous location after the Spirited Goat closed in December 2020. A GoFundMe campaign was established to help raise the capital to fund the purchase, but fell short of its goal.

Harney said the nearby current location poses a few challenges that he would like to overcome. So far, it’s more a coffee store than a true café, but he hopes to change that. His intention is to expand Brother Bears’ offerings further, and another move may be in the business’ future.
In the meantime, Harney said he was grateful that local folks have continued to buoy Brother Bear’s through its various iterations.

“I just have a heartfelt appreciation of the people of YS for their unconditional support for me,” he said.

Right across the hall from Brother Bear’s Coffee, in the same building, is Wyld Hare Dreadlocks, owned by Anna C. Burke. Although the business has been in operation for some 10 years, Burke said its recent move to 108 Dayton St. has revolutionized its offerings and identity.

“We outgrew all the other spaces that we’ve been in,” she said.

Among the many benefits of the new location are increased visibility, an added sense of legitimacy and the chance to expand the store’s inventory and offerings.

“No one knew we existed,” Burke said. “[The move] also expanded the retail side of things, which is really cool.”

Although the benefits of the downtown location are manifold, Burke said Wyld Hare is not reliant on tourist traffic. Wyld Hare is an appointment-only boutique, and specializes in dreadlocks and dreadlock-related products. Visitors can find all manner of extensions, accessories and more, and customers travel to Yellow Springs from far afield to peruse its specialty wares.

In addition, Burke is a prolific artist, and the new space has allowed her to establish a gallery within the store, an unanticipated boon.

Burke acknowledged that the move was made possible by help from allies in town, who gave her a heads-up that the space would soon become available.

“It couldn’t have happened if I hadn’t had support, if people in town hadn’t known me,” said Burke.

“I also own a business on the same street as my sister [Lindsay Burke, of YS INK], which is random and cool!”

Since 1987, the Village Cyclery has served villagers’ cycling needs at the same location, nestled in its alcove at 110 Dayton St. Now, the business is expanding into the space left vacant by the departure of its longtime neighbor, Design Sleep. The new location is in the same building that hosts Brother Bear’s Coffee and Wyld Hare Dreadlocks, as well as the Sidedoor Salon and Rock Around the Clark.

Owner and operator Mike Jensen said the pandemic had a complex effect on the Village Cyclery.

As the Cyclery fell under the umbrella of essential businesses due to its classification as a transportation enterprise, COVID restrictions dramatically altered the way it did business.

Unwilling to expose his employees to the virus, Jensen took on the responsibility of being the only physically present employee while the shop was open.

At the same time, the pandemic has presented a number of unique opportunities for the Village Cyclery — and the past two years have been some of the busiest on record for the business.

“People wanted to be outside, gyms were closed, they wanted to do something with the kids,” Jensen said. “Also, people were a lot more health-conscious. It was a very blessed business to be in during COVID.”

That same boom in sales has also meant an ongoing bike shortage worldwide, which Jensen said could delay the expansion of Village Cyclery for up to two years. When the expansion is complete, however, Village Cyclery will increase its focus on stocking more models, especially electric bikes.

“[The expansion] is doubling the size of our business,” Jensen said. “It’s also double the storage space, which is really, really big. … [It’s] a nicer space. This is a workshop — the other place is more boutique-y.” 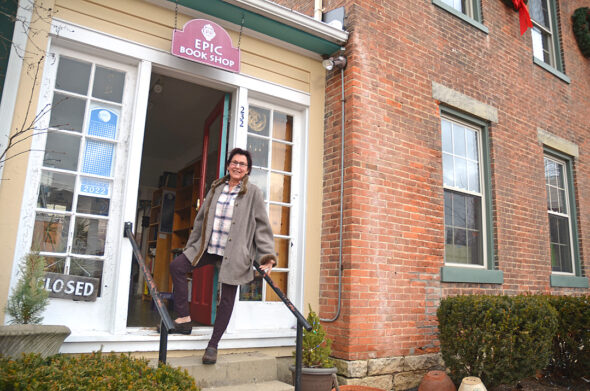 Gail Lichtenfels stands on the steps of her store, Epic Book Shop, at 232 Xenia Ave., having recently returned to the space where she orignially opened the business in 1973. (Photo by Matt Minde)

After years of migrating between various locations, on Sept. 1, Epic Books returned to its original home at 232 Xenia Ave, where it first opened for business in 1973.

Epic Book’s owner and operator, Gail Lichtenfels, said the move to its new/old space was partially related to the fact that the location was where it all began — “In a nostalgic way, perhaps,” she told the News — but said it wasn’t the primary reason.

Lichtenfels cited the fact that the location was better for generating walk-in business from tourist foot traffic. Previously, Epic Books was located behind the Emporium abutting Kieth’s Alley, partially out of sight from downtown’s sidewalks. Lichtenfels also noted the benefits of the extra space and the improved natural lighting.

When it opened, Epic Books exclusively sold new books. With the advent of online retailers, such as Amazon, Epic was forced to adjust its business model. After a stint on Dayton Street — coincidentally, the same location where Brother Bear’s would later open — Epic Books shifted away from brick and mortar sales and operated exclusively online for about five years. When Lichtenfels returned to a physical location, Epic Books had hybridized, offering both new and used books.

Epic Books is a full-service book store, offering special orders and discounts for reading groups and study groups. Before the pandemic, reading groups were hosted in the store. Although COVID-19 put a temporary stop to the gatherings, Lichtenfels said the tradition may return soon. 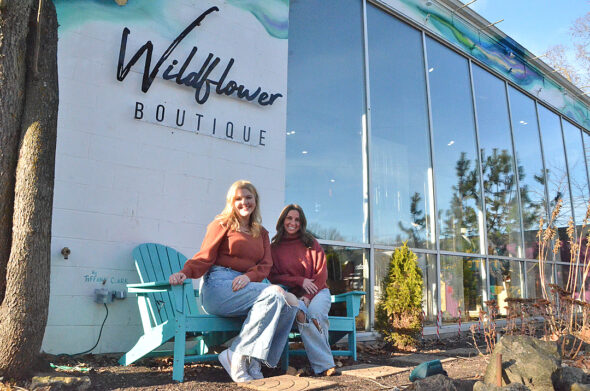 Having vacated the space that Epic Books overtook, Wildflower Boutique has moved to another historic location at 224 Xenia Ave. — the former home of Rita Caz in Kings Yard. Within the building, visitors will find a forest of colorful jackets, cardigans, dresses, hats and more, all illuminated by the sunlight passing through the building’s signature wall of windows.

When Wildflower opened in 2015, its original location was much smaller, and the business quickly outgrew its confines.

The new space has allowed Wildflower to greatly increase its inventory and display more of its stock on the floor. Furthermore, the store has plenty of room for shoppers to spread out, an important consideration during the pandemic.

Mershon said she was initially worried about the shift from a focal location on Xenia Avenue to a building that was slightly more secluded.

“The worries quickly went away within a week of moving here,” she said.

Business has been good since the move. The large building, the increased inventory and the new layout have all led customers to spend more time in the store and, Mershon thinks, to make more and larger purchases.

Toxic Beauty Records, located at 220 Xenia Ave., will soon give shoppers a new space in which to peruse the vinyl. Owner Joshua Castleberry is in the process of making a number of changes to the music store.

After being forced to close in 2020 due to the ongoing pandemic, Castleberry started the website Vinylgram.com, which offers vinyl records delivered to the homes of customers. Like its brick and mortar counterpart, Vinylgram.com features new and independent releases and back-catalog titles, as well as posters and other merchandise.

When Toxic Beauty reopened, Castleberry implemented an array of COVID precautions to mitigate risk. Upon arriving at the shop, Castleberry himself sprays visitors’ hands with hand sanitizer. Then, if the showroom is under capacity, he opens the barrier he installed to regulate the number of people in the store at any given time. He has also installed a “traffic light” system to indicate to shoppers on the street whether the store has room for them upstairs.

“It took many months trying different methods of crowd control and cleaning until I felt our small space was safe for myself and the customers,” Castleberry said.

To relieve some of Toxic Beauty’s high traffic and limited capacity, Castleberry has opened a new showroom on the ground floor. The annex will bear the branding of Vinylgram, and will be integrated with the website. The downstairs showroom will feature a walk-up record window where customers can purchase records from outside or pick up orders they have placed on the website.

“Think of a walk-up pizza window, but instead of ordering a slice, you can order some vinyl,” Castleberry said.