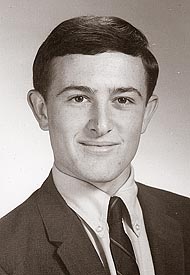 He loved all birds, but his favorite was the blue heron. The first movie he ever saw was “Moby Dick” at a theater in Saudi Arabia when he was 6 years old. He adored bit players, character actors, session musicians and local newspaper columnists, and could talk about them at great length. He had four children with two different wives and they all get along to this day — even the wives.

He had a lot of jobs: lawn mower pusher, burger slinger, foundry worker, car salesman, systems analyst — but none of these was his career. His career was talking. He learned how to swim in the Persian Gulf from a tugboat captain and former Olympian named Captain Ed, a man he would talk about some six decades later. He was born in Indianapolis and won an infant beauty contest soon thereafter. He was fastidious about his person and tucked a napkin into his collar as he sat down for every meal. His first child was born on his eighteenth birthday.

When he worked at Lang’s Chevrolet, he brought home new cars for his little brother to drive long before that kid had a license. He made his brother drive fast. “If you can’t drive any faster,” he told him, “get out.”

He adored writers, whether they were Nobel prize winners or just anyone who could sit down and pen a decent letter. He loved writing letters, and sending clippings of newspaper articles or the Sunday comics. He read the funny papers every weekend. He read, by some estimates, a million newspapers in his lifetime. He particularly loved those small local papers, vanishing these days, like the Yellow Springs News, where his nephew works. A stack of Yellow Springs News editions held a prominent place in his living room until the day he died.

He helped create the computerized version of the international banking system for NCR. With only a few credit hours of college, he did alright for himself. But you didn’t hear him boasting about that kind of thing. Money didn’t matter much to him. Woodpeckers. A warm apricot scone. A good NPR story. Those things mattered.

He had a good recipe for chili. He had a precise way of cutting the peppers which included pauses for storytelling and so could take an excruciatingly long time while you sat there waiting for dinner, probably starving.

After “Moby Dick,” he saw approximately a million movies and could tell you about each one. He could tell you who the cinematographers were, and the art directors, and maybe also who played drums on a rock n’ roll record that came out the same year the movie did. By the end of it, he’d also have told you about running into a politician or a baseball star at a bar, or at a diner, or at his dry cleaner’s. He adored bars, diners, and dry cleaners. He also adored the beach, and the ocean, and everything in it — he swam with sea turtles and octopuses and could talk about them all. He refilled his many bird feeders religiously, but this was the only religious thing he did, except for reading, which he did more than religiously, he did it reverently.

He adored musty tents, rocky sleeping surfaces, uphill hiking, campfire breakfasts of scalded sausage and drinking coffee from those enamelware mugs you only use when you go camping.
He was the second oldest child in a family of five siblings. There is a picture of four of those kids on a beach in Saudi Arabia, toddling around their mother, Dorothy, like ducklings. Dorothy instilled in him a love of conversation, as she was one of those classic midwestern, mid-century coffee-talkers. He loved talking to Dorothy, and about her. He wasn’t always easy, but who is?

On Sept. 11, he escaped out of downtown Manhattan over the Brooklyn Bridge through a massive cloud of dust that maybe, possibly, poisoned his blood.

His friends called him John, Johnny and Dixon. When he called you on the phone, he always said in response to your greeting, “This is John Dixon.” He had some friends who were twice his age and some who were half his age. He was friends with a couple of infants along the way, not to mention a few cats. He found friends wherever he went. He could talk to anyone, and he did.

He is survived by his children, Kim, Sean, Katie and Anna; his grandchildren, Ella and Esmé; and his wife, Susan, and ex-wife, Carolyn, and her husband, Bill; a son-in-law, and a brother and sister and their children. He is also survived by many friends, among whom were his golf buddies, workmates, neighbors and an untold number of random strangers who he entertained (or not, because let’s face it, he could go on) with his stories while perched on a barstool somewhere.

He is survived by the trips he took and the books he read and the movies he watched and the golf he played. Did we mention the golf? He loved golf because you could walk and drink a bourbon and smoke a cigar, during and after. You could talk while you played.

Did we mention the talking? Damn, he loved to talk. He needed to tell you about things, all sorts of things: sports, novels, songs, comedians, paintings, creatures, trees — because he loved, admired, or revered them so much. He wanted us to love these things, which was his way of showing us that he loved us. He talked about us, too, when we weren’t there. He told other people stories about us. That was another way he showed us that he loved us. His life was shorter than it should have been, but he talked enough for several lifetimes.

He is survived by everything he ever told us.