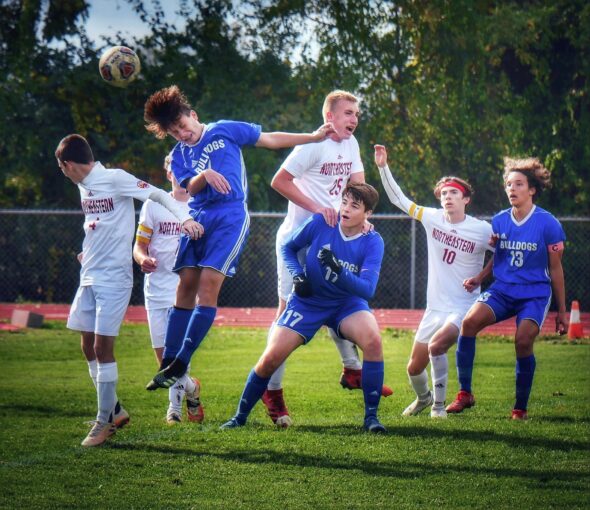 On Saturday, Oct. 23, the YSHS boys soccer team routed Northeastern 10–0 in a tournament game. From left, Grayson Horn headbutts the ball away as Jason Knemeyer and Eli Eyrich stand at the ready. (Photo by Michael Knemeyer)

2021 in Review | Sports and Recreation

Despite classes continuing online in the first months of 2021, Yellow Springs Schools completed a winter sports season with boys and girls basketball teams competing at the high school level, a combined coed basketball team playing at the middle school level, a high school bowling team also competing and a cheer squad keeping energy high at boys and girls basketball games. A swim team did not come together, however, as the local practice venue, the Antioch College Wellness Center, was not available because of the ongoing pandemic.

At the start of 2021, girls basketball standout Angie Smith, then a junior, had scored 1,260 points in her high school career, going on to net about 125 more points before the end of that season. Now a senior, Smith’s most recent total is about 1,600, with eight scheduled games left this season. Her total would surely be even higher if the pandemic hadn’t reduced the team’s number of games.

• The Bulldog bowlers traveled to Marian Lanes on Feb. 10 for the Division II Southwestern District Sectional tournament. Then-sophomore Krishan Miller finished 48th out of 142 bowlers, qualifying him for the district meet Feb. 19, where he represented Yellow Springs well, but did not advance to state.

Yellow Springs senior softball player Bre Wallace was selected to play in the Ohio Southwest District Softball Coaches Senior All Star Game on June 10 at West Carrollton High School. Wallace played catcher for the Bulldogs, and her .571 batting average was tops in the Metro Buckeye Conference. Wallace was also second in the conference for runs batted in, with 23, and third for runs scored, with 20.

The tennis team’s sectionals tournament May 11 in Troy featured hard-fought wins by senior Ian Sherk, sophomore Henry Smith-Heston and the doubles team of sophomores Ethan and Jason Knemeyer. After winning his first match and advancing to round two, Sherk lost to the No. 1 singles district seed. Smith-Heston cruised through his first two matches, winning handily, but was eliminated in the third round. The Knemeyer duo, who entered sectionals as the No. 1 seed in doubles play, won all their matches to advance to the district tournament on May 20 in Mason, where their progress was stopped by the No. 2 seeded doubles team.

The high school boys and girls track team hosted 11 schools at the annual Bulldog Invitational, which took place at Greeneview High School on May 5. The event, also known as the John Gudgel Invitational, was held at Greeneview while work on the Yellow Springs track was being completed.

• The annual Metro Buckeye Conference track and field championship on May 15 saw individual Yellow Springs athletes finishing on top of their events. Then-sophomore Cheyan Sundell-Turner ran to victories in the 1,600 (5:35.7) and 3,200 meter (12:32.35) races, and senior Annlyn Foster sped to a season best time with a first-place finish in the 100 meter hurdles (16.24).

• The Division III district track and field meet on May 22 at Northmont High School saw several Bulldogs earn finishes qualifying them for regionals the following week. Senior Haneefah Jones was crowned the district champion in the long jump with a first-place jump of 16’3½”, and Sundell-Turner was victorious in the 3,200-meter race (12:25.18). Foster ran a personal best time in the 100 hurdles (15.88) for a runner-up finish, and the girls 400-meter relay team of Jones, Malaya Booth, Avery Reeder and Foster ran a season-best time (52.86) for a hard-fought second-place finish. Rounding out the girls squad in qualifying for the regionals was Booth in the 100 meters (13.67), by finishing fourth. Junior Yanne Gilley led the boys team, earning a trip to the regional meet in the long jump, finishing second (19’3½”), and narrowly missing competing at regionals in the 200 meter dash, finishing fifth.

• The Division III regional meet May 26 at Troy Memorial Stadium saw two Bulldogs earn medals.
Foster achieved an eighth-place finish in the 100 hurdles, and Sundell-Turner placed eighth in the 3,200 meters.

• Perry League T-ball returned to Gaunt Park for each of the five Fridays in July, with beloved longtime coach Jimmy Cheshire announcing his retirement at the end of the season.

For the fall sports season, the Bullddogs fielded teams in boys and girls soccer, cross-country and volleyball.

The high school girls soccer team started the season with 18 players — five returning, six who hadn’t played in a few years and seven who had never played soccer before. Despite many mismatches and several scoreless games, senior captain Tahlia Potter finished the season second in the Metro Buckeye Conference. or MBC, with 15 goals, and freshman Gema Brizuela led the conference with 172 saves in the regular season. Four players were also selected for official conference honors. Potter and Sparks were voted onto the MBC First Team, and senior Myrah Burton earned a spot on the MBC Second Team. Senior Sophia Lawson earned the Sportsmanship Award for Yellow Springs.

• The high school cross-country boys and girls squads competed Oct. 23 in the postseason Division III meet at Cedarville University, where 28 schools toed the start line. Sundell-Turner, for the third year in a row, qualified for the regional contest, where on Oct. 30 she became the first YSHS girls cross-country runner since Lois Miller in 2012 to qualify for the state meet. At the state contest Nov. 6, Sundell-Truner finished 65th in a field of 187 runners.

• After a 17-game streak of undefeated play, with 14 straight wins during the regular season and three in the postseason tournament, the Yellow Springs High School boys soccer team saw its run come to an end Oct. 30 with a 4-0 loss to Mariemont, out of Cincinnati, in the final game of the district level tournament.

Yellow Springs native Aamil Wagner, a senior at Wayne High School where he was an offensive lineman on the Division I football team, made a verbal commitment in November to play for Notre Dame University next fall. He is the youngest son of Teresa Bondurant-Wagner and Lee Wagner.

With first games in November, the winter sports season was at the half-way point at the end of December. Boys and girls basketball, bowling, cheerleading and a newly formed swim team are all in play.