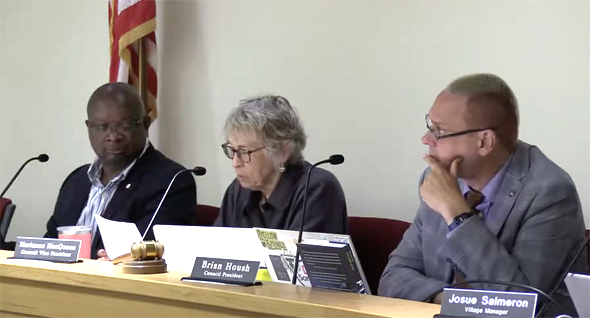 At its Feb. 16 meeting, Village Council members passed a resolution to purchase three acres of land running along the eastern edge of Yellow Springs School’s East Enon Road property for a bike path connecting the village with Agraria Center for Regenerative Practice. The Village purchased the land for $60,000, but will lease the connector to Agraria for $2,000 a year for 15 years.

Villagers overwhelmingly opposed a proposal to create a designated outdoor refreshment area, or DORA, in the village’s downtown. After a motion for a first reading scheduled for Council’s May 3 meeting did not receive a second, Village Manager Josué Salmerón scheduled a town hall meeting to hear villagers’ concerns. Those who spoke at the meeting opposed the proposal, and no villagers or business owners spoke in favor of it.

Council passed several measures addressing transient guest lodging, or OTG, referred to colloquially as Airbnbs. The first two measures, passed in May, added a $2,000 fee for TGL operators within the village and banned new TGLs that are not owner-occupied. The third measure, passed in July, stated that TGLs cannot be located within 500 feet of each other.

After receiving a grant from Broadband Ohio, the Village moved to create a public utility for municipal broadband in September. The grant monies, paired with CARES Act funds, allowed the Village to build infrastructure to add up to 300 homes to the fiber network that the Village started building out in 2020.

Yellow Springs landlords cannot refuse a tenant housing based on their source of income, according to legislation passed in September. This means that prospective tenants cannot be turned away if they want to use a Section 8 voucher, or other alternative income, to pay their rent.

Over the course of the summer, Village Council approved several measures to create a building department for the village after hearing complaints about the county system. The new department allows for a streamlined process for villagers seeking to build structures on their properties.

Village Council voted to censure member Laura Curliss in October after several negative interactions between Curliss and members of Village staff. Curliss, who voted against the measure, said the move was politically motivated in regard to the upcoming election.

After the conclusion of the Nov. 2 election, Council will welcome one new member, Carmen (Lee) Brown. Brown ran on a platform that included representation of service workers on Council and eyeing ways to make the village more affordable. Incumbents Brian Housh and Kevin Stokes each won another term as well.

Village Council approved a resolution to purchase an apartment building located at Lawson Place from the Brown family. The action was taken to help the village maintain its affordable housing stock.