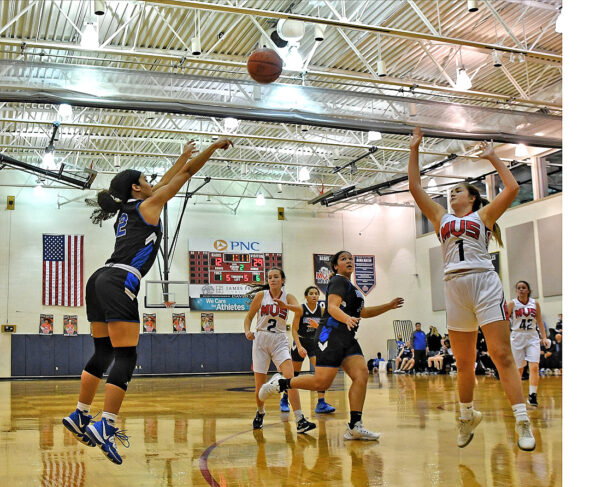 The YSHS girls basektball team remained at the top of the conference this week, with a 5–0 in league play and a 10–4 season record. Above, Junior Corinne Totty shoots the ball in a game against Miami Valley School earlier in the season. (Photo by Michael Knemeyer)

The Yellow Springs High School boys varsity basketball team saw the end to their 10-game winning streak with a pair of heartbreaking losses against conference rivals last week, according to the Metro Buckeye Conference, or MBC, website. The first was in an away game Tuesday, Jan. 11, against Legacy Christian Academy in Xenia, 54–48; and the second was at home Friday, Jan. 14, against Dayton Christian, 62–58.

Senior DeAndre Cowen was the top scorer at the away game, with 17 points, one assist and seven rebounds. Other teammates collecting points were senior Nate Curtis, with 10 points and five assists; junior Eli Eyrich, with eight points, seven assists and 10 rebounds; senior Malik Thomas, with six points, one assist and 13 rebounds; senior Javas McNair, with four points and three rebounds; and senior Cameron Harris, with three points.

Statistics for the Friday home game were not available at press time.

The Yellow Springs High School girls varsity basketball team had one game scheduled last week, Thursday, Jan. 13, against Dayton Christian, but the contest was postponed, according to the MBC website.

The team remained at the top of the conference, with 5–0 in league play and a 10–4 record for the season, as it headed into a home game Thursday, Jan. 20, against conference rival Jefferson Township.

Boys and girls hold their own

The Yellow Springs High School boys and girls bowling squads went up against two strong teams last week in matches Tuesday, Jan. 11, against Middletown Christian, and Wednesday, Jan. 12, against Greeneview, according to the MBC and Ohio Heritage Conference websites.

The boys toppled 1,856 pins against Middletown Christian’s 2,238; and the next day struck 1,930 pins against Greeneview’s 2,200, which included a perfect game by Greeneview senior Braeden Brennaman.

The boys conference record is 2–3, with season play at 3–3; while the girls are 0–4 for the conference and season. The boys have three more matches scheduled this season, and the girls have two.