Board of Education renews facilities discussion

How best to address deteriorating conditions and outdated capacities identified in Yellow Springs’ public school buildings is a question that remains unresolved for district leaders.

Two separate proposed solutions, one presented in spring 2018, and another in fall 2021, were soundly rejected at the ballot by more than 60% of the vote, with much of the opposition pointing to the attached price tags as being too high for local pocketbooks.

In the wake of the latest defeat, recently installed new school board members Dorothée Bouquet and Judith Hempfling put their heads together to come up with an approach for developing a facilities plan that will be satisfactory to a majority of the community. They presented a draft of their proposal during the most recent BOE meeting Thursday, Feb. 10.

They didn’t mention the widely known fact that they came to the table from different views on the issue.

Elected in November, Bouquet ran on a platform that supported the district’s levy request to build a new school that would house all of the district’s students where the middle/high school campus is currently located, and in turn receive a 26% cost reimbursement from the state. Hempfling, also elected in November, ran in opposition to the levy, stating that demolishing the two current campuses to build a new single facility was not environmentally responsible, and that phased repairs, renovations and targeted construction could be paid for in a way that was less painful to district residents.

Reaching “common ground” was important to the pair in resuming the facilities work, they said in a follow-up phone call earlier this week.

Bouquet said that in talking with voters who opposed the levy, she heard not only concerns about affordability, but also the desire for more information about the costs of alternative repair/renovation approaches in maintaining both campuses, so that a more informed comparison could be made. 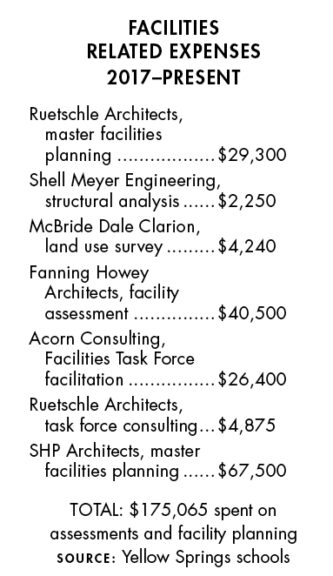 District administrators have contended that the plan voted down in November was the most cost effective over the long run. Bouquet had come to the same conclusion, but voters told her they wanted to see more cost breakdowns and analysis.

“That’s a missing piece,” she said.

Fundamental to their proposal is the establishment of a new Facilities Committee that will gather information with particular focus on the potential needs and costs associated with renovating and maintaining the district’s two campuses, in order to compare them with the costs of new or partial construction.

Their hope is that the committee, to be made up of local tradespeople and building professionals along with daily users of the schools, will have a report to present to the board by fall of this year.

They said the committee will extend and complement the work that came before, including separate building assessments, priority-setting by the Facilities Task Force, and results of meetings last year by the Community Advisory Committee and the Educational Visioning Team, of which Bouquet was a part.

The proposal envisions a final report that will address topics including:
• The usefulness and disadvantages of the current facilities;
• A prioritized list of needs from the point of view of current users;
• An update on the condition of the buildings and their systems;
• An exploration of possible options for addressing energy efficiency and environmental sustainability;
• A schedule for completing work and a plan for limiting disruption to students and staff;
• A tally of total costs as well as costs of possible individual phases;
• An estimate of ongoing maintenance costs;
• A list of possible funding sources and models;
• An analysis of what a permanent improvement plan would involve.

Another aspect of the proposal involves hiring consultants as needed.

The hiring of consultants and other financial expenditures were among concerns expressed by the district’s new treasurer, Jay McGrath, in response to Hempfling and Bouquet’s presentation.

According to district data, the district has spent more than $175,000 in assessments and facilities planning since 2017. McGrath noted that the total is in direct payments to “outside vendors” and doesn’t include the cost of “inside work” that “diverts resources” from other concerns.

McGrath also said that the proposal as written sounds like it already had a predetermined outcome pushing toward a phased renovation plan.

Hempfling said that isn’t the intent. The proposal is to gather more data for a broader comparison of options and to promote more informed decision making, she said.

McGrath continued: “This proposal is written in a one-way direction of a permanent improvement plan,” he asserted. “That is a decision to renovate and not replace, and you haven’t even investigated the options; you haven’t even asked for my input as far as what I would recommend. I guess I find that a little bit offensive.”

“We don’t mean to offend, but we’ve gone through two failed levies,” responded board member Amy Magnus, who ran for a board seat on a platform that included calling for a phased permanent improvement plan.

Hiring, for example, is the purview of the superintendent, he said, not the board or a committee.
For her part, Superintendent Terri Holden said she “serves at the pleasure of the board,” but she has made it clear where she stands in terms of favoring new construction.

Whatever decision the board eventually makes, “my goal is to get the best facilities for my children and my families and my staff,” Holden said.

She also said she takes exception to suggestions that the previous process was not “legitimate,” which she said undermines the hard work, “time and emotion,” completed by community members, families and staff.

In this week’s follow-up phone call with Bouquet and Hempfling, Bouquet acknowledged having misspoken in using the word “legitimate” during their board presentation when talking about the desire to gather more information in answer to requests from the community.

They also said that they had met with the treasurer before the board meeting and were “surprised” by his critical response during the public meeting.

Hempfling said one thing the response made clear was the need to better explain the goals and purposes of the proposed facilities committee, which she sees as “a technical information gathering group.”

“The decision [about what path to take] won’t be made there,” she added.

Bouquet said the proposal emphasizes alternative renovation and repair approaches because that is the information that has yet to be gathered.

She added that she realized during the board meeting that in the hours spent working with Hempfling on their proposal, “we have moved through some of the divisiveness on these issues,” and now they need to bring the board and administration — and eventually the community — to the same place.

“I feel very hopeful about communicating a path forward to the community,” she said.

“What we don’t want to happen is for misunderstanding to undermine the effort,” Hemplfing said.

“We want to make sure it’s a trusted committee. We want good information that engenders good understanding of our options,” she said.

Bouquet and Hempfling are revising their proposal, and the board’s discussion will continue in a special meeting Monday, Feb. 28, beginning at 7 p.m., in the board’s meeting room at Mills Lawn.

Other business from the Feb. 10 meeting will be covered in a future issue of the News.

One Response to “Board of Education renews facilities discussion”