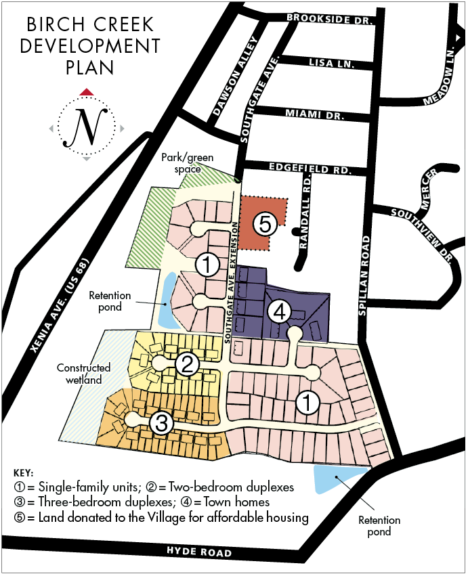 Miamisburg-based Oberer Land Developers aims to rezone their 52-acre property on the southern end of Yellow Springs as a planned unit development, or PUD. This new designation would allow Oberer to develop 140 units in their proposed Birch Creek neighborhood, including townhomes, duplexes and single-family homes.

At its next regular meeting, on Monday, Feb. 7, Village Council will revisit a vote on rezoning a parcel of land on the village’s south side owned by Oberer Land Developers.

After a first reading on Jan. 18 of an ordinance to rezone the 52.6-acre parcel from Residential-A to a planned unit development, or PUD, Council will vote on the measure when it hears a second reading on Feb 7.

An earlier vote attempt to rezone the acreage was tabled in December 2021.

The ordinance’s first reading came on the heels of a Jan. 12 town hall meeting during which a majority of participants voiced opposition to the rezoning as outlined. Those opposed pointed to a variety of concerns, including road safety near the proposed development, aesthetics and the affordability of the planned housing.

This is not the first time Oberer has met with opposition in the village: In the 1980s, Oberer received a grant from the federal government to build an affordable housing complex, to be called Bryan Commons, on Dayton Street.

In a series of articles written over several months in 1983 and 1984, the News reported that plans for a 48-unit apartment building presented by Oberer to Planning Commission were met with a “lukewarm reception,” and members expressed “serious concerns with the viability” of the apartment building for Yellow Springs.

Planning Commission members were concerned with “the diversity for the village’s population,” citing the need for more single-family homes to house more “homeowning families with school-age children.”

At the time, 47% of the village’s housing were rentals. Another reported concern was perceived issues with traffic and the population density of the units on the 7.4-acre site.

Oberer responded to Commission concerns by revising its plan to accommodate more units suitable for families with children. The revised plan called for 16 one-bedroom units, 24 two-bedroom units and eight three-bedroom units. The units would have been federally subsidized for people with low to moderate incomes.

The Commission ultimately voted against approving the project twice, first against the 48-unit apartment complex, and later, a revised 36-unit complex. Village Council, based on Commission recommendations, had the final say in the matter, striking the project down by a vote of 5–0.

After the two rejections, Oberer sued the Village and won on the grounds that the Village had denied Oberer their legal right as landowners to build, as codified in the Village’s existing zoning laws. Although the courts sided with Oberer in a legal battle that cost the Village around $100,000 and lasted about three years, the project was eventually abandoned by the developer after the federal grant for funding expired.

If Village Council approves the ordinance to rezone Oberer’s land on Feb. 7, villagers who oppose the PUD zoning as it stands could challenge the approval. According to the Ohio Revised Code, or ORC, Yellow Springs residents can bring the issue to a vote via a popular referendum.

“Ballot initiatives are important tools for communities to achieve development goals,” Village Manager Josué Salmerón told the News in a recent interview. “In our community, [a referendum] is not that difficult.”

Salmerón pointed to the ORC requirement that a petition for referendum be signed by 10% of a municipality’s electorate. According to the ORC, most local ordinances can’t go into effect for 30 days after approval; within that 30 days, petition organizers must collect signatures from local voters and submit them to the Village.

After a petition for referendum is submitted, the Village has 10 days to submit the petition to the Greene County Board of Elections for a review of included signatures; it must also be submitted within 90 days of a scheduled election in order to be placed on the ballot. Though a primary election will be held in May, a potential referendum would fall short of that requisite 90 days.

According to the Greene County Board of Elections website, the soonest Yellow Springs could vote on a referendum would be a special election scheduled for August.

“[We would be] looking at an August election that would be paid for by the Village,” Salmerón said; at Council’s Jan. 18 meeting, Council President Brian Housh estimated the cost to the Village for a special election would be around $4,000.

If a referendum does appear on ballots in August, voters will have the choice to either uphold the ordinance as it was originally approved or strike it down.

“So if the PUD gets approved, the net effect of a [successful] referendum will be to undo the PUD,” Salmerón said.

If such a referendum were to succeed, Council and Oberer would have to go back to the drawing board on a second proposed PUD, or Oberer could choose to move forward with building on its land as it’s currently zoned.

Salmerón added that, should a petition for referendum make it to the ballot — or if the PUD ordinance is voted down by Village Council on Feb. 7 — Oberer can choose to withdraw its PUD application altogether.

“I will know come February 9 if Oberer would be interested in riding out [a potential] ballot initiative or if they would request that we withdraw the PUD application and have Council adopt the referendum, which would have the same effect as if [a referendum] were voted on and approved by the voters,” he said.

In the event that Council approves the PUD zoning ordinance and a following referendum fails, Salmerón said those who oppose the zoning might still be able to challenge the zoning via ballot, with the possibility of legal action from Oberer.

“The community could consider rezoning [Oberer’s land] through a ballot initiative, but I think that would get problematic — that’s when you’re talking about potential lawsuits,” he said. “Citizens could bring a ballot initiative to dedicate [the parcel] as conservation land. … But would it hold up in court?”