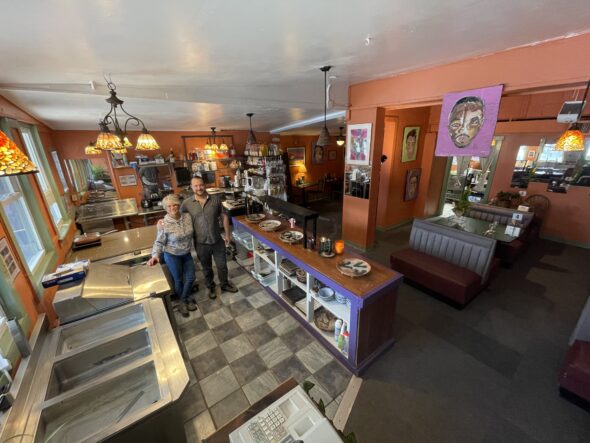 Jayne Brahler and her nephew George Brahler stood together this week in their new restaurant in downtown Yellow Springs, The Veganry, which officially opens on Saturday, April 30. (Photo by Cheryl Durgans)

A walk through the outdoor seating area alongside the Emporium could be the beginning of a delicious, culinary experience for foodies who enter The Veganry, the village’s newest restaurant.

Nestled behind the Emporium and accessible via Kieth’s Alley, the restaurant will officially open on weekends starting Saturday, April 30.

The Veganry is a retirement venture of sorts for villager Jayne Brahler. She will be running the restaurant along with her nephew, George Brahler. Jayne Brahler is set to retire from the University of Dayton at the end of May, after 22 years as a professor of physical therapy. Her nephew is a chef and musician who just moved to Yellow Springs from California to work with his aunt, arriving on the cusp of opening day.

The menu features four items that should be a draw for vegans and nonvegans alike, including the restaurant’s “Be Kind” burger, which is gluten- and soy-free and covered in fresh veggies and greens; African peanut soup; a Buddha bowl featuring sweet potatoes, beets and avocados on greens and tomatoes, accompanied by a green onion dill dressing; and an Ethiopian meal that includes red lentils, chickpeas with seitan ribs, collard greens, enjera, split peas and lentil stew. Vegan mac and cheese will be an optional side dish, and homemade vegan ice cream will be a dessert choice.

The revolving menu, intentionally limited for efficiency and small staff management, will still include diverse options on a weekly basis, and customers will have flexibility in deciding which ingredients to eliminate or add in some cases.

“We’ll have a few more things once we are comfortable with pace,” Brahler said.

The restaurant had a soft opening in January, keeping limited hours on the weekends so that Brahler and her team could work the kinks out of the process and ease into an official opening once Brahler retired.

She soon realized, however, that running a restaurant was incompatible with her teaching schedule, and she was not able to do both. She reluctantly decided to close until her nephew, who was preparing to move across country, arrived.

“People were quite supportive [of the decision to delay the official opening], posting congratulations on my retirement [on the restaurant’s Facebook page],” she said, adding that people told her that they were glad she was taking care of herself and that waiting was a sign of maintaining a healthy life balance.

Because of that brief early start, Brahler is opening this weekend, having already gained a solid following of patrons willing to travel from Cincinnati and Columbus to eat at her restaurant.

“People say that the Veganry feels like they are in a European cafe — that it feels like another country when they step inside,” she said.

The restaurant emits a laid-back and comfortable vibe, with the kitchen located prominently in the front — an intentional design choice for Brahler, who wants people to feel like they are walking into a welcoming kitchen.

“With ours, you’ll know we’re a messy kitchen,” she said.

The walls are painted a warm, reddish-copper color complemented by flashes of sage green accents along the molding.

Hanging on the walls are paintings made by local artist Sumayah Chappelle. Live plants centerpieces adorn the tables. Large jars of veggies that Brahler canned herself rest on a shelf.
Visitors to the restaurant will have the opportunity to eat off handmade pottery made by another local artist, Mike Jones; Brahler said she plans to make his wares available for sale.

Born and raised in Lawrence, Kan., Brahler grew up in a vegetarian family with two brothers and a sister. She later switched to a vegan diet because, as she said, “vegan food — it’s what I think tastes the best.”

Brahler said Lawrence was a wonderful place to grow up, and that her formative years were spent horseback riding.

She attended Montana State University and received a degree in broadfield agriculture. She has the distinction of becoming the first woman in the world to become a certified journeyman, or horseshoer, and operated her own journeyman business before entering grad school, where she received a master’s degree in exercise physiology and a Ph.D. in the interdisciplinary doctoral program at Washington State University. She has been married for eight years to her second husband, English professor James Jerry Powell, whom she met 14 years after the death of her first husband.

In her late `60s, Brahler described herself as a “pistol,” and she is looking forward to growing the restaurant with her nephew.

George Brahler, age 36, also grew up in Lawrence, but lived in Sacramento, Calif., for 10 years before joining his aunt in Yellow Springs. He just arrived in the village after several days of driving when he spoke with the News earlier this week.

The younger Brahler studied trumpet and voice at the University of Kansas before earning a master’s degree in trumpet performance from Indiana University in Bloomington. His move to California came after joining the military and securing a position with the U.S. Air Force band playing trumpet, on active duty for five years while stationed at Travis Air Force Base, followed by three years in the National Guard.

George Brahler was never far from a kitchen, however, despite his musical endeavors and military service.

“The whole time when I was in Kansas, I worked in a kitchen for seven years and [became] very familiar with [catering] events,” he said. “In California … I had a neighbor who was a professional chef, and I did catering events with him. I’ve always loved being in the kitchen.”

Thai cuisine and various types of spicy food are among his favorite dishes to prepare.
Having visited Yellow Springs a couple of times before his move, George Brahler said that affordability played a major part in his decision to relocate here from the East Bay area.

“It was time to leave, I had enough of California — it was wearing on me,” he said. “I was trying to figure out how to pay rent. It was astronomical.”

“I just recently left a funk and R&B soul band in Sacramento,” he said.

Describing his musical tastes as diverse, he said he’s approached his musical career with the goal of not limiting himself.

“I’ve sung in operas and played in big bands and done vocal jazz ensembles and marching bands,” he said.

The Brahlers said that they have always been close, and were looking for a way to collaborate with their shared talents. The time was never quite right until now. As they adjust to their burgeoning partnership, George Brahler knows one of his contributions to the restaurant will involve hospitality.

“I’ve always been a big fan of hospitality and just gathering people together and making good food, creating an atmosphere of laughter and conversation,” he said. “That’s what I really love about being in the kitchen — seeing all that happen and making people feel good with the food they are eating.”

The Veganry will be open on Saturday, April 30, 11 a.m.–6 p.m. Detailed menu information can be found on the restaurant’s Facebook page at http://www.facebook.com/blackbarnveganry.