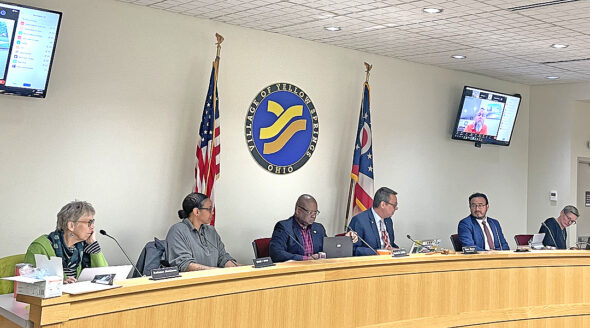 Council members said they were happy with the rules, which provided a guideline for commenting and making posts as private citizens.

This additional procedure follows myriad complaints from villagers about Council President Brian Housh’s online decorum, which several letter-writers found to be unbecoming for the president of Council.

During the public hearing, Athena Fannin commented that there should be additional verbiage saying that Council members should recuse themselves when voting on legislation that concerns them, referencing a vote at the April 4 meeting where Housh voted “no” to allocate funds to fulfill public records requests concerning him.

“You voted on a public records vote about your own malfeasance,” Fannin said. “That should never happen.”

Housh said that he voted “no” due to the volume of requests and the cost to the village, adding that he was unhappy with News coverage that quoted him saying his “no” vote was a result of confusion.

“The whole point of why I voted against [the legislation] had nothing to do with [the public record request] being about me,” Housh said. “The scope of these requests has gotten out of control, and our citizens need to understand that just throwing money at this problem is not going to be the way to resolve it. I’m not convinced it makes sense for us to just spend more money on records requests.”

Council members voted 4–0 to pass the legislation without any additions or changes. Council member Kreeger was absent.

In other Council business from April 18:

Legislation
• Council heard a second reading on an ordinance amending the subdivision regulations. The changes state that applicants submitting a preliminary plat to the Village must do so at least 25 days prior to the next scheduled Planning Commission meeting. The Planning Commission then has 30 days to review and either approve, approve with modifications, or disapprove the plat plan.

• Council passed an emergency ordinance to sell a portion of the Center for Business and Education land to Cresco. The company is purchasing the land so that it can expand its operations, which will add 100 jobs. In addition, the ordinance allows Cresco to store items on Village property adjacent to the build site through March 2023.

• Council heard a first reading on an ordinance that would clarify standards for numbering buildings within the Village.

• Council heard first readings for three ordinances that would change verbiage to acknowledge the creation of the Yellow Springs Building Department. Changes include striking mentions of “Greene County” in regard to the building department. Each ordinance will receive a second reading at Council’s May 2 meeting.

• Council passed a resolution moving forward with a sidewalk project on Limestone Street. The resolution allows the village manager to enter into a contract partnering with the Ohio Department of Transportation.

• Council passed a resolution celebrating the fifth anniversary of Yellow Springs as a Buckeye Trail Town and a bicycle friendly community.

CLUP overview
Village Solicitor Breanne Parcels gave a short presentation on the differences between the zoning code and the Comprehensive Land Use Plan, or CLUP. The presentation, in part, refuted claims made by an attorney representing RAYS, a community group that has come out in opposition to two recent subdivision projects. According to Parcels, the CLUP is not codified, and is to be used for planning purposes, but the zoning code is the final measure used to evaluate proposed projects.

Community events
Council discussed funding for community events such as Juneteenth, Yellow Springs Pride and community block parties. This will be the first time the Village will sponsor block parties since 2019, the year prior to the onset of the COVID-19 pandemic. Village Manager Josué Salmerón said staff would be working on applications and planning for up to 20 block parties. Council members discussed whether they should resume giving block party organizers $25 gift certificates for Tom’s Market or if the Village should buy supplies for the parties in bulk. Council will continue its discussion at a later meeting.

Council members spoke in favor of waiving rental fees for the John Bryan Community Center to support Yellow Springs Pride after hearing a short presentation from Amy Wamsley. The proposal for this year’s Pride event is a two-day event on June 25 and 26 that will include a parade, speakers and vendors on the lawn of the John Bryan center and a community picnic the next day.

Council member Kevin Stokes gave a short presentation on the Juneteenth celebration, which organizers are planning in collaboration with Daughters of the Underground. The celebration will include a 10-mile walk from Wilberforce to Yellow Springs to “celebrate the emancipation of Black people.”

Council’s next meeting will be held on Monday, May 2.