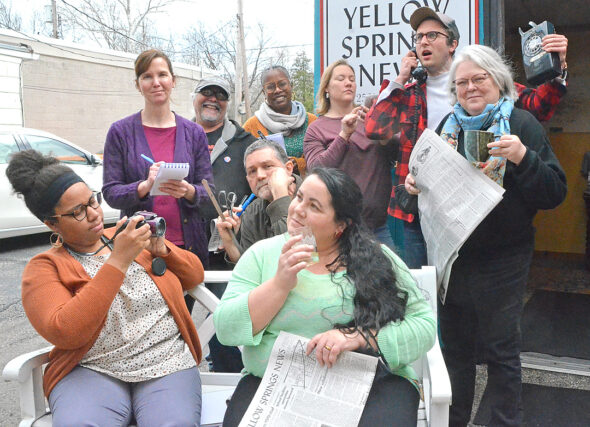 In celebration of the News’ 12th win in as many years as “Newspaper of the Year” in its class by the Ohio News Media Association, staff members posed for a photo featuring the tools of the trade. from left, front row: Jessica Thomas, Matt Minde, and Lauren “Chuck” Shows. back row: Lynda Highlander, Tim Walker, Cheryl Durgans, Jeanna GunderKline, Reilly Dixon and Carol Simmons. (Photo by Otto Timer)

For the 12th year in a row, the Yellow Springs News won the top prize at an annual state competition for weekly newspapers.

The News was named “Newspaper of the Year” in its division at the Osman C. Hooper Non-Daily Newspaper Competition, which is presented by the Ohio News Media Association. The News has clinched the honor each year since 2011, in addition to earlier wins in 2008 and 2006.

Awards were presented virtually on Tuesday, Feb. 24, following the January cancellation of a planned in-person ceremony due to the ongoing pandemic.

The News also came away with seven first-place wins in individual competition categories, as well as four second-place and two third-place awards.

The News competed across all divisions in the “Community Awareness” category, earning second place for reporting that focused on racial issues in the community. Judges noted that “lots of voices in the stories helped readers gain understanding.” The award was shared among the News’ reporting staff, including current reporters Reilly Dixon, Cheryl Durgans, Lauren “Chuck” Shows, Carol Simmons and Jessica Thomas, as well as former reporters Megan Bachman and Audrey Hackett.

The reporting staff also won first place in its division for “News Coverage,” with judges writing that the issues of the News submitted for consideration were “impressive.”

Judges wrote: “The News shows high-level journalistic judgment, with front pages that highlight school, COVID and crime stories with top-notch reporting … [and] copious coverage of news that matters to the community — from calendar listings, to police reports, to letters and news of births, marriages and deaths. An enjoyable read from start to finish.”

Veteran reporter Carol Simmons took home two awards for her work, including first place in “In-Depth Reporting” for her September 2020 article, “A look inside Yellow Springs schools.” Judges wrote that the piece, which explored remote learning, was “one for Yellow Springs’ historical archives,” and that it “effectively captured both the educator’s and the child’s perspective of a school world no one would have imagined.”

Simmons also won first place in the “Best Sports Feature” category for her January 2021 story, “School sports amid pandemic,” which judges called a “fine story of how the COVID pandemic disrupted ‘normal.’”

Jessica Thomas, who is the most recent addition to the News’ reporting staff, won second place in the Division C “Best News Story” category for her August 2021 story, “Chamber faces backlash over director’s posts.” That story reported on the hiring and subsequent firing of Xenia resident Elizabeth Ford as executive director of the Chamber of Commerce, following backlash related to posts Ford made on social media.

Judges wrote that Thomas “did a great job laying out but not overblowing [Ford’s] postings considered racist and homophobic — and then exploring problems in the process to hire her.”

Cheryl Durgans, who was a columnist (“The Briar Patch”) for the News before becoming a reporter and editor-in-chief, shared first place in the “Original Columns” category with contributors Bomani Moyenda (“Sankofa Talk”) and Dawn Knickerbocker (“Little Thunders”). The three writers were lauded for “clear presentation in telling stories about the community that have often been untold.”

The News’ production staff, which includes Reilly Dixon and Matt Minde, won first place in the category of “Best Page Design” and second place for “Best Newspaper Design.” Judges noted the paper’s “slick design” and wrote that “the simplicity of the pages is what makes them great.”

The production staff and advertising manager Tim Walker — as well as Suzanne Szempruch, former advertising manager — were recognized with a first-place award for advertising, of which judges remarked had “excellent control of type” and “good humor” and “achieved engagement without sacrificing good design.”

“[The photo] shows great emotion and intensity,” judges wrote. “The shot has good depth and the shutter speed ideally captures the movement of the runner’s feet off the ground. The aperture setting is appropriate and the symmetrical framing is effective.”

The entire staff won second place in the “Special Edition” category for its 2021 April Fools Edition of the “Yellow Springs Snooze.”

The current staff of the News also includes Jeanna GunderKline, bookkeeping; Kitty Jensen and Karen Gardner, proofreading; and Jeff Vawter, distribution. The News is owned by Durgans, Minde and Shows.