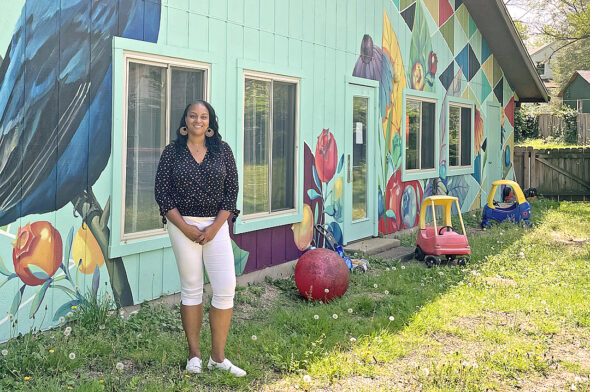 After nearly five years at the Yellow Springs Community Children’s Center, Malissa Doster is stepping down from her position as the center’s director. She is pictured standing next to a mural in the center’s new infant playground. (Photo by Jessica Thomas)

When Malissa Doster took on the role of director of the Yellow Springs Community Children’s Center in late 2017, she was tasked with steadying finances, raising enrollment and developing a vision for the center. After nearly five years of meeting goals and setting new ones, Doster has stepped down as the director of the center, or YSCCC.

In an interview last week, Doster told the News that she and her family are moving to Pennsylvania to be near her brother and extended family. Reflecting on her time as with YSCCC, Doster noted that her years there were challenging but very rewarding.

“The Children’s Center is like my baby,” she said. “It’s sad to let it go into someone else’s hands, but I just have to trust and believe that the staff will support the person who steps in in order to help the center grow.”

Trust has been one of the running themes throughout Doster’s tenure at YSCCC. She said that one of the things she learned in her over 20 years of childcare experience is the importance of trust between administration and staff.

“I learned from my previous job [as a childcare facility administrator] how valuable it is to be great to your teachers,” she said. “It’s my job to help them grow and feel appreciated because as staff of child care centers, we’re kind of overlooked.”

To make her staff feel more comfortable in the classroom, Doster said she worked on adding more structure by establishing a curriculum and encouraging teachers to work on their child development associate credential. Doing so played a large role in YSCCC receiving a five-star rating by Step Up to Quality, a designation granted by the Ohio Department of Education. YSCCC received its five-star rating in early 2020.

“It was a huge celebration for the staff because of how hard we worked to be able to give quality education,” Doster said.

According to Doster, YSCCC has been able to maintain that five-star status throughout the COVID-19 pandemic despite staffing shortages and changes.

Asked about the effects of the pandemic, Doster said that it was all a learning experience for her and the YSCCC staff, particularly when the center had to shut down amidst a COVID-19 outbreak amongst staff and students.

“Nobody wants to see kids get sick,” Doster said. “But I wasn’t expecting the backlash from the community.”

Doster said she hopes that the community will embrace the person who takes her place and continue to support the Children’s Center, which relies on money from fundraising to supplement from student tuition to cover costs.

As for fundraising, Doster said that finding money was a challenge that she took on when she took the director position.

“I taught myself to write grants by watching YouTube videos,” she said. “We also have raised a lot through small fundraisers.”

Parents and center supporters have learned to look forward to the center’s bi-annual flower sales — mums in the fall and hanging baskets in the spring. This year, Doster set a $35,000 fundraising goal to purchase a bus for the center after Terri Holden, superintendent of Yellow Springs schools, said the district would not bus students to and from the YSCCC for the before- and after-school programs.

“We are well on our way to meeting that goal,” Doster said. “We may be able to purchase a bus as early as the beginning of next school year if we keep this momentum.”

Doster said that bringing the after-school program to YSCCC from Mills Lawn Elementary School was a big accomplishment for her. To do so, two classrooms had to be renovated.

“We had these two big classrooms and it didn’t make sense to have them sit empty,” she said. “It was also hard to have a structured program in the [Mills Lawn] gym — we had to bring our own toys and activities.”

Doster described her intention in redecorating the rooms, saying that she wanted each space to be one where she would be proud to send her own children.

“It needs to be inviting when you’re giving tours,” she said. “Besides decorating and updates, one of the priorities was to get air conditioning throughout the building. We had rooms that had to be shut down in the summer because they were too hot for kids.”

In addition to the indoor changes, part of the strategic plan Doster developed focused on getting new equipment for the playgrounds and opening a playground that would provide a dedicated space for infants and toddlers.

“The support we got from families was overwhelming,” she said. “We are still working on the infant playground, but it’s coming along.”

While there is still work to be done, Doster believes that she is leaving the center in capable hands.

Doster plans to work hourly to help with the transition to a new director before moving to Pennsylvania, where she hopes to work for a school serving underprivileged children.

“I’ll really miss this center,” she said. “But looking forward, I just want to continue doing what I’m doing — supporting families and helping to build leaders in our communities.”