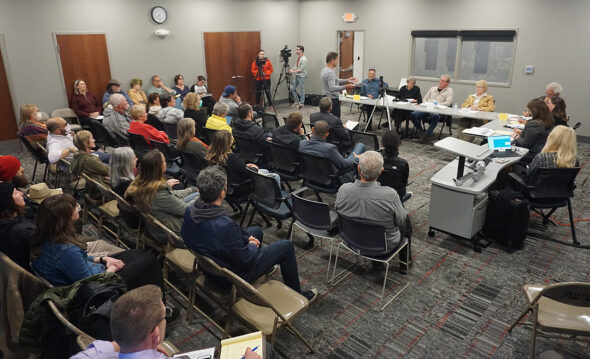 On Thursday, April 28, the Miami Township Board of Zoning Appeals, or BZA, unanimously approved a temporary conditional use variance that allows another ticketed series of summertime outdoor shows to be hosted by comedian Dave Chappelle at the Wirrig family pavilion between U.S. 68 North and Meredith Road. Here, Steve Wirrig, the pavilion's owner, gave a testimony at the meeting. (Photo by Reilly Dixon)

Another summer of outdoor shows presented by comedian Dave Chappelle at the Wirrig family pavilion got the green light Thursday evening, April 28, when the Miami Township Board of Zoning Appeals, or BZA, voted to approve a temporary use request by property owner Steve Wirrig.

In a vote of 4–0, with one member absent, the BZA placed one condition on the proposed series of performances — that there be no more than three shows per week — while granting the requested maximum of 24 events from May 26 through Sept. 5. The application had sought up to four shows a week.

A BZA decision was necessary because the ticketed shows are a commercial activity, and the land, located between U.S. 68 North and Meredith Road, and abutting Young’s Christmas tree farm, is zoned for agricultural use, according to Miami Township Zoning Inspector Richard Zopf.

Noting that two of the BZA members voting “yes” Thursday night had voted against the majority decision regarding his last request in September for an extended weekend of performances the following month, Wirrig said of the previous dissenters, “They heard us. They adapted.”

“It’s truly the best thing I could have expected from the Township,” he said.

Other specifics of the application included an increase in the maximum number of patrons from 400 to 1,000 per show; a limit of 200 patron vehicles to be parked on the property, with the majority of ticket holders to be bused in from other parking locations; and the availability of up to four food trucks at each performance.

BZA member Barbara Krabec asked whether the increase to 1,000 seats would necessitate the addition of more speakers and thus increase the noise level coming from the events. Wirrig said that the lifting of previous COVID-19 restrictions, including physical distancing requirements, means that 1,000 seats can now be grouped into the same two-acre space that held 400 before.

Krabec also asked why Chappelle didn’t shift to presenting shows at his proposed comedy club at the former Miami Township firehouse on Corry Street. Wirrig noted that the facility is not close to being operational. Further testimony later in the hearing revealed that initial plans for the venue showed a 50-person capacity.

Support for continuing the outdoor shows dominated testimony during the three-hour-and-15-minute hearing, 40 minutes of which were spent with the BZA members deliberating behind closed doors in executive session.

The meeting room of the Miami Township Fire-Rescue station didn’t quite reach its 67-person capacity, but came close, with only a handful of seats unfilled. Among those in attendance were Greene County Prosecutor David Hayes, Miami Township Trustee Marilyn Moir, representatives of various local media outlets, Wirrig and his attorney, David Montgomery.

In addition to Wirrig and Montgomery, 17 people offered testimony. All, but one, expressed support for the shows, citing economic, cultural and mental health benefits from the original series of performances that went through the summer of 2020 and continued briefly in spring 2021.

During that time, locally based Chappelle welcomed a slate of high-profile comedians, musicians and celebrities to the Wirrig Pavilion stage.

“I’m here because I’m extremely proud of what we’ve done,” Wirrig said in presenting his application.

The lone opposition Thursday night, a neighbor of the pavilion property, said she could live with anything as long as she knows it’s temporary, but she had several complaints about the shows.

Specifically, she said litter had been a problem; concert-goers frequently used her driveway as a turn-around and two of her chickens had been hit; and the quality of her summer evenings was changed on performance nights. She also didn’t feel that Wirrig had followed through on a promise to reach out to neighbors, which he made during his first BZA hearing in 2020.

Wirrig responded by listing some of his actions following that hearing, including hosting a meeting with neighbors and distributing his contact information to nearby properties. The neighbor said she had expected him to come to her. He apologized and said he would follow up with her personally and work to allay her concerns.

Another neighbor who supports the shows said he would be happy to help with litter control, as did several others during their testimony.

In addition to the spoken testimony, 35 written statements came in before the hearing, according to Zoning Inspector Zopf, who said that all but three or four, at least two from the same household, supported the shows.

The original performances took place during the height of the pandemic, and they began in response to the performance limitations that came with the lockdown. With the worst of the pandemic apparently behind us, the new request for the coming summer was grounded in positive outcomes that previously occurred, as cited in an economic impact study commissioned by Chappelle and completed by the Cleveland-based Silverlode Consulting firm.

The 2020 series included 54 shows presented over 15 weeks. Based on information provided to Silverlode by Chappelle and his company, 42 guest artists performed without compensation, about 16,360 tickets were sold, and audience members traveled from more than 40 states.

Overnight visitors — performers and patrons — booked about 8,300 hotel rooms while they were here.

Several of the local residents testifying Thursday are local business owners who said the patronage that came in association with the previous shows was vital in helping them stay afloat during the pandemic, but they continue to struggle, and another summer of performances would give them a needed boost.

“If it hadn’t been for those [summer 2020] shows, our business would have gone under,” said Mark Heise, who opened Yellow Springs Tees with his daughter in 2019.

Also speaking as current president of the Chamber of Commerce, Heise said the pandemic’s effects continue to linger.

“Small businesses have not recovered,” he said. “We’re living hand to mouth.”

Local resident Lindsay Burke agreed, saying her business, Ink Arts Collective, “would not have made it without these shows.”

She also testified that the shows promoted anti-racism and increased the diversity of the town, bringing in Black performers and show patrons.

“Mr. Chappelle’s anti-racist work is important to me,” she said, citing not only his “8:46” short film about the police killing of George Floyd, but also his support of the weekly Speaking Up for Justice rallies and marches in summer 2020.

“I was at the first march,” Krabec said. “On the sidewalk was Dave Chappelle, and one of the marchers said, ‘Join us.’ [But Chappelle] said, ‘I’ve got work to do.’”

“Dave Chappelle is not a saint,” Krabec said.

“I agree,” Wirrig said, adding that nobody is.

Krabec went on to say she had been so offended by some of the public statements Chappelle made earlier this year concerning the proposed Oberer housing development, that she came into Thursday’s BZA hearing disinclined to approve the Wirrig conditional use application.

“I’m trying to tell myself that [that] has nothing to do with this application,” she said.

Krabec insisted she could remain unbiased.

In the end, the positive economic impact cited in the Silverlode analysis and the testimony from local business owners prompted the BZA’s unanimous approval, Krabec said after the vote.

“The economic benefit affects so many more people in the area,” she said. “We had to go for the greater good.”

In addition to Krabec, the three other zoning appeals board members voting on the application were Chair Richard Silliman, Geoff Garrison and Linda Parsons. Member Dave Neuhardt was absent.

On Monday, May 2, Parsons submitted her resignation from the BZA in an email to the Miami Township trustees, writing, simply, “I quit.” Trustee Don Hollister read the email aloud during the trustee’s regularly scheduled meeting that evening.

Krabec also attended the May 2 meeting, telling the trustees that she came in order to publicly apologize for “losing [her] temper” during Thursday’s hearing.

The voter-elected three-member Trustee board — currently Hollister, Marilan Moir and Chair Chris Mucher — appoints the five BZA members, as well as the five members of the Township’s Zoning Commission.

The Township trustees, who also employ the zoning inspector, are not involved in the BZA process beyond appointing the board members.