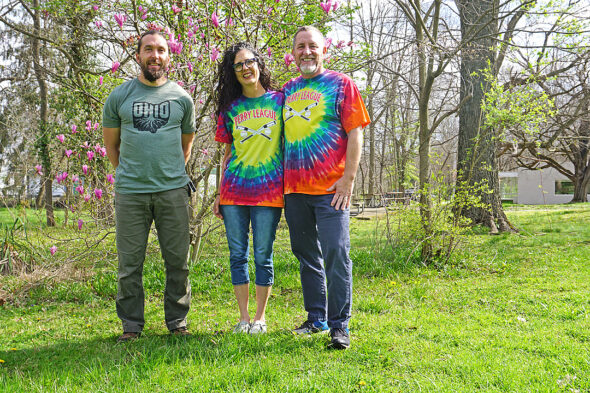 T-ball lovers of all ages — but particularly those ages 2–9 — have reason to celebrate: A new slate of volunteers have stepped up to the plate to lead Perry League, the village’s beloved, 52-year-old T-ball program.

Yunus Brevik and Margi and Rob Gay will lead youngsters on the T-ball diamond beginning this summer. All three volunteered under previous program head Jimmy Chesire, who retired from Perry League last July after 35 years.

The Gays have been out at Gaunt Park on Fridays for the last seven or eight years, they said, to help with and cheer on their three grandchildren and the rest of the village’s youngsters. Margi Gay has been connected to the village for nearly three decades via her work at Electroshield, which she co-owns. That connection meant that, in addition to her grandchildren, her own now-grown children, Ben and Dylan Clonch, grew up running the T-ball bases in Yellow Springs every summer weekend as well.

“I have great memories of it being like a social hour [for parents] on Fridays — when you have young kids, it’s hard to find a safe place to have fun and socialize,” she said in a recent interview. “That’s how I got to know people in town.”

Rob Gay’s adult children, Brian and Emily Gay, were also regulars on the Perry League diamond in their youth. Though he currently works as a building maintenance supervisor, he said he and his wife’s past work in a preschool — not to mention their decades-long association with the program and his lifelong love of baseball — made volunteering to help lead the program something of a natural fit.

“We just love kids, love being on the field with kids,” he said. “I’m approaching retirement, and Margi said, ‘[Perry League] is something we can do.’”

In writing about Chesire’s retirement last year, this reporter speculated that it might take more than one person to fill his shoes — a sentiment the new program heads share. The Gays said that, though they and Brevik will all shoulder various responsibilities, Brevik’s new role will be the one most analogous to the one Chesire filled.

“[Brevik] will run out to the gate [with the kids] and lead them in the exercises,” Margi Gay said.
Brevik — whose eldest child, Judinya Thwaites-Brevik, is now 19 — said Perry League didn’t come on his radar until 2019, when he was again parenting young children: Thea, who is 6, and River, who is 3. At the time, he said, he wasn’t particularly interested in introducing his children to the program.

“My philosophy of childhood is counter to the majority of organized sports,” he said.

However, Brevik said, some friends with kids who play T-ball advised him to give Perry League a chance. Though the T-ball league is organized in its way, it’s not what most folks think of when they imagine “organized sports,” his friends told him. So Brevik took a trip to Gaunt Park and saw for himself the groups of kids and adults waiting on the first base line to throw out extra balls when a hit is made, the concept of “1,000 strikes,” and the few kids each week who delight in devoting their attention to the dirt and clover in the outfield.

“I thought, ‘This is beautiful,’” Brevik said. “That really was what got me hooked — it seemed like such an amazing approach to sports that fit really well with my personal philosophy.”

That philosophy has been shaped by Brevik’s career background in early childhood education.

Over the years, he has worked with Head Start programs and in public schools in Dayton and at the Community Children’s Center in Yellow Springs. He now splits his time between working as a caregiver to his two youngest children and part-time with Preschool Promise, a Dayton nonprofit focused on kindergarten readiness for 3- and 4-year-olds.

“I realized how closely [Chesire’s] approach mirrored the philosophy of education that I brought to my early childhood teaching,” he said. “[Perry League] is child-led, and [Chesire] always seemed to be present in the moment and was listening to children.”

Brevik said he was convinced to step into a leadership role by Becky Reed, a longtime volunteer who the new leaders said intends to continue to support the program.

“I did not want to be the next Coach Jimmy — but [Reed] was pretty persistent in her nudging,” Brevik said.

The trio of leaders said they’re looking forward to the beginning of the new season, and that parents and kids returning to the field of play can expect just a couple of changes. First, parents and guardians will be asked to fill out a registration form for kids intending to play, either in advance or at Gaunt Park. Second, the program will reintroduce an old safety measure that was once in place, but had fallen off in recent years.

“When our kids participated years ago, [volunteers] would draw a line — a half-circle — to keep the kids behind, like a safety barrier,” Rob Gay said. “We’re going to institute some safety areas to keep kids and bats from coming in contact.”

Otherwise, the three said, they expect everything to proceed much as it has in years past.

“We’re hoping the Friday nights will have the same feel, like a community event,” Brevik said.

Included in continued traditions will be the customary weekly write-up on the sports page of the Yellow Springs News, a long-treasured part of Perry League. All three program heads will take turns writing the reports. The confirmation of these write-ups resulted in gratitude — and relief — from the News staff.

“[The writing] captures the essence of the evening,” Rob Gay said. “It won’t be like Jimmy’s, but we’ll do our best to try and capture the moments that we experience.”

Perry League — Yellow Springs’ all-volunteer, non-competitive, beginner baseball program for children ages 2–9, regardless of race, creed, color, sexual orientation, ethnicity, spiritual inclination or practice or ability — will host its first night of play on Friday, June 3. Orders for Perry League T-shirts will be taken through Friday, May 11, via the league’s Facebook page, “Perry League T-ball,” where updates about the league will be posted. Registration forms are available online at bit.ly/3v6UmSp.