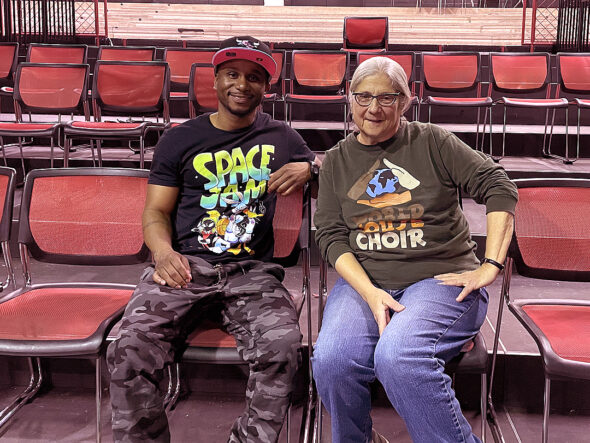 Guy Banks, left, whose stage name is “Tronee Threat,” is pictured with World House Choir Director Catherine Roma. The two were in rehearsals for the concert “Solidarity Dividend: Art in Action,” which will be presented Saturday and Sunday, May 14 and 15, at the Foundry Theater on the Antioch College campus. (Photo by Cheryl Durgans)

When the COVID-19 pandemic forced the area to come to a grinding halt in March 2020, Yellow Springs-based choral director Catherine Roma was preparing for a series of encore performances of the hit musical “Hamilton” with the incarcerated members of the KUJI Men’s Chorus at Marion Correctional Institution, with some vocal support from several women in the locally based World House Choir.

Flash forward to 2022 — as the world begins to allow for increased community gatherings — some former members of the KUJI choir, now “returned” from prison, will perform with the World House Choir in concerts scheduled Saturday, May 14, at 7 p.m., and Sunday, May 15, at 3 p.m., in the Foundry Theater on the campus of Antioch College.

Twelve “returned,” or formerly incarcerated, artists, including rap performers and visual artists from several area prisons, will join the World House Choir to present “Solidarity Dividend: Art in Action.” The event is billed as a “musical exploration and celebration of connections to each other — inside and outside of prison walls and across real and imagined boundaries and differences.”

Inspired by “The Sum of Us: What Racism Costs Everyone and How We Can Prosper Together,” a book by Heather McGee, the program includes music of the civil rights movement, gospel tunes, hip-hop, spoken word and a tribute to the children of Ukraine.

The audience will hear works by three returned citizens: Guy Banks, Michael Powell and Montez Mickens. Other returnees will sing in the choir and are featured soloists. Included in the experience will be visual art work created by Aimee Wissman and Kamisha Thomas. Together, they founded an organization called RAG, or Returning Artists Guild, and they have curated an art exhibition of works by returned artists that will be on display both days of the concerts. A film hour at 1 p.m. Sunday will feature short films made by Wissman and Thomas while they were incarcerated at Dayton Correctional Institution.

The adage “art saves lives” is at times bandied about to describe scenarios in which art becomes the catalyst through which life changing experiences occur. In many ways, retired Wilmington College professor Catherine Roma’s educational and music career directing choirs for several prisons in Ohio is a snapshot into how music can inspire change through social justice work. A former member of Roma’s KUJI Men’s Chorus, Guy Banks — who goes by the stage name “Tronee Threat” — said his prison experience never derailed his life-long passion for music. In the midst of preparations for the Solidarity Dividend concert, Roma and Banks shared their story of connection and collaboration in a joint interview.

Call it a spark, spirit or soul recognition, but both Roma and Banks say they can’t pinpoint why they feel a deep connection with one another, only that it is anchored through music and spans generations and cultures. On the surface, the archetype of elder and master teacher and student follows the standard protocol of the day between Roma and Banks. However, just below the surface there seems to be a dynamic synergy that implies that the role of teacher and student is subverted at times, both learning from one another.

Roma, who refers to Banks as “Tron,” met him at Madison Correctional Institution in 2012, where he was serving a 14-year sentence. He was later transferred to Marion, and was released this spring. Banks, who is originally from Columbus and has two daughters, Naja, 15, and Wisdom, 11, does not sugarcoat the violent act for which he was sent to prison. According to Banks, he was convicted of four criminal charges ranging from felonious assault to gun charges.

Banks said he was always a musician, dabbling intuitively into the process when he was a child, and then more seriously as a teenager going into the studio to record. In his early 20s, he started a record label called Money Addict Entertainment, and worked prolifically — recording hundreds of songs in pursuit of a music career.

“I was really getting into the industry when I caught my case,” he said of his crime and conviction. “Obviously [incarceration] derailed that, but when I went to prison, there was still opportunity to grow musically there.”

Saying that music is part of his DNA, Banks continued creating music in prison. His musical influences are fluid and include jazz, country music and pop.

“My father’s side listens to all types of music, rock ’n’ roll, Michael Jackson; and my mom plays Tina Turner, Sade — stuff like that,” Banks said.

Roma met Banks when he decided to join the choir she started and led at Madison Correctional, a level one and two medium-security prison. Banks said he was encouraged by an inmate they both knew, named Popcorn.

Popcorn approached him and said, “Hey, uh, Banks man, you want to join this choir?”

Having no choir experience, Banks initially told Popcorn, “not really.” But Popcorn urged him to try it out. The choir was meeting in the chapel just a few steps down from the barbershop, so Banks decided to check in.

“One thing I was already into in prison was staying busy and staying active,” he said.

Banks described his impression of Roma when he met her for the first time: “She was unique … I got in there [the chapel], the energy was good, the people in there were cool/ … I thought yeah, this could be something sweet,” he said.

The Madison choir would eventually be named after a song he wrote, “Ubuntu,” a South African word whose meaning is sometimes framed as, “I am, because we are.”

At the first meeting, Roma asked the choir to “please think about writing a piece of music that is about community and bringing us together.” It was near the holidays, and she was going on break.

Banks said the song he wrote was originally an extremely negative song with different lyrics, but the same melody.

“I will write a song like that, in my heart — I know I will never put it out, but I will get it out [of me]. … So when I was going through writing the song, I said, ‘man, I have a really good melody.’ I took the melody, flipped the words and wrote ‘Ubuntu’ out of that,” he said.

Banks and Roma’s partnership ended for a time when Banks decided to transfer to another prison.

Banks described the separation as “one of those, ‘if it was meant to be, it will come back around.”

Roma said that when Banks told her he was leaving, her response was panic.

“Tron comes up to me … and says, ‘I have to leave and go to this other prison because there is really a place for me to grow there musically. … He was motivated and was sure. I didn’t question it, I was just sad for myself and for the group,” she said.

However, meeting again was meant to be, and in 2015, Roma and Banks reconnected at Marion Correctional Institution.

The comfort they have with one another is evident in the easy banter between them. Banks said he was preparing for a TED talk that was happening in a section of the facility he normally would not traverse when he recognized the back of her head.

Roma: “I ended up starting a choir at Marion …. I didn’t know Tron was there, or I had forgotten  — tell the rest of the story — you saw the back of my head.”

Banks:  “Yeah, she used to wear this dye in her hair, and in prison, and she look how she look —

Banks: “I am walking past the window — I saw the back of her head and the dye going down [her long hair] and thought, ‘Ain’t no way that’s her,’ but it’s gotta be her, no one else in the world looks like her. … I walk into the room and say, ‘What’s up?’

“I’m thinking I am going to get a ‘hey how you doing, it’s so good to see you!’ She turned around and started talking to me like we had just seen each other yesterday — like plans, like work … so I’m like, ‘you know we could have gotten a greet or something — she just slid right into it, but that’s what I like.”

According to Roma, Popcorn — who originally recruited Banks into the Ubuntu choir, had also transferred to Marion. Banks and Popcorn recruited about 17 people to join the choir that became KUJI, named after the Kwanzaa principle for self-determination. The choir went on to do staged performances, including “Les Miserable” and “Hamilton,” in addition to performing concert repertoire. They were scheduled to do more “Hamilton” shows, in which Banks played the lead role — “But, COVID,” Roma said.

Banks was released from prison March 25. Through an unlikely process from a support team that included Roma, his daughters, their grandmother, Coyla, and at least 15 letters of support from friends, colleagues and Antioch College, Banks managed to secure an early release — something that didn’t seem possible initially.

“I had [served] 10 years out of the 14 [-year sentence]. I had to serve 10 and a half years before I could even think of trying to get out early. In my paperwork it showed I was never going to be eligible for a judicial release — but we threw that idea to hell and we tried it,” he said.

Upon release, Banks moved to Yellow Springs. Obtaining certification for physical fitness instruction while in prison paid off with a job at the Wellness Center, where he currently works as a trainer. He’ll enroll at the college in the fall.

Information about World House choir and their upcoming concert, “Solidarity Dividend: Art in Action,” can be found on their website at worldhousechoir.org.