Haller to retire from YS schools after 30 years

As reported in the May 26 issue of the News, three longtime staff members of the Yellow Springs school district retired this year, including high school intervention specialist Donna Haller.

Haller told the News in a recent interview that she started this past school year not expecting to leave at the end.

“I hadn’t planned on retiring for two to four more years,” she said.

She said she has always loved Aug. 1, the day local teachers return to their classrooms to prepare for the new year.

“I’ve already planned most of my classes before I get back,” Haller said.

She said she’d long decided that when she wasn’t excited about returning to the classroom, she’d know it was time to retire. That wasn’t yet the case at the beginning of the 2021–22 school year.

“This year I was excited, and I really wasn’t ready to leave. … But then by the end of September, I had spent two really beautiful Sundays sitting out on my deck writing IEPs [Individualized Education Plans]. I’d just found out my daughter was expecting her second baby here in town, and I thought I might be ready,” Haller said.

After doing some numbers crunching Haller formalized her decision. 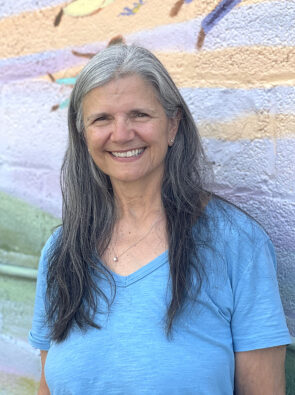 Haller said she then informed Hattert about her plan to leave earlier than anticipated to spend more time with her grandchildren.

But leaving a job she enjoys is not easy, Haller said. “I love, love, love my job. I’m going to really miss being in the classroom, I’m going to miss my classroom. I have the best classroom in the whole school. Every teacher says that, I hope,” she said.

Haller’s path to teaching came later in her work career. While employed as a systems engineer for GM/EDS, Haller was in school pursuing a bachelor’s degree in business and communication. She quit work to become a stay at home mom with her daughter in 1988 while also building a family business, Haller Displays, with her husband. She also owns a Creative Memory scrapbooking materials and supply franchise, which she’s run for 30 years.

It was Haller’s active role in the schools when her daughter went to kindergarten in the early ’90s that started her journey in education.

“I was a volunteer all over the place, and I was PTO president, then I was class advisor for two of my kids’ classes, and then I was a substitute teacher, a homebound tutor and then I became an instructional assistant. I was running a business from home, and I was pretty free to do all these other things — especially subbing — and then they talked me into going back to school,” she said.

Haller returned to school when she was in her 50s to get a master’s degree in education.

“I was an aid while I was going to school. I went to school full time and got my master’s a year- and-a-half later,” she said.

Haller credits her children, Jeff, Anna, Jonathan and Issac and her partner, Dale Hotaling, for their support throughout the process of obtaining her degree. There was even a period of time when she and her children overlapped as students.

“There was actually one year when three of my kids and I were in college at the same time,” she said.

Still, it took a while for Haller to return to the classroom in the district. “At the time there were no teaching jobs here, so I started teaching at ECOT, [Electronic Classroom of Tomorrow], and then started teaching here in 2012,” she said.

Haller has been an intervention specialist for grades nine and ten most of her years teaching in the district, working to improve the executive functioning skills of students who need extra support with college and career readiness.

Haller says the biggest changes she’s seen to the classroom throughout her tenure as a teacher is the use of mobile phones.

“My students will say, ‘I knew she was going to say this,’ [It’s] the phone. It’s very hard for the students to focus in class because if they don’t have their phone … they want to have it and that’s all they think about,” she said.

Haller sees phone usage as a challenge to learning. “I don’t know what they are going to do to fix that because many of my students have ADHD, and it’s hard to focus on their very best day with no technology in the way. And with their technology, it just makes it almost impossible,” she said.

But Haller also sees the positives of technology in the classroom. “A lot of their work is done on the computer now, even if we are in class face to face. They have their assignments given to them, so if they have to be out — and some students have had to be out because of COVID and quarantine — they can still work at home, which is really great,” she said.

Haller also shared some advice for new teachers entering the classroom, especially about the use of phones in the classroom. According to Haller, teachers who nip phone usage in the bud early, have little trouble. “Build good relationships early and let your students know that you are there for them, and try to tame the phones early so they don’t get used to it. The teachers who do allow it — it gets out of hand. Maybe start some good practices early in the school year and in your career,” she said.

Haller also suggests cleaning out desks every year. “I’m finding fun things, and I’m like, ‘I wish I’d known I had something that I totally forgot,’” she said.

Finally Haller emphasized continuous learning. “The other thing I tell teachers: never stop learning yourself, because it keeps the excitement for learning.”

Haller has fond memories of her work as a teacher, including building student-teacher relationships. “One of my favorite things is getting to know the kids really well. Because I have a small caseload — you get to really know them, and I love that. Working with students one on one I get to see what they need, and figure out how to help them,” she said.

During Haller’s interview, it quickly became clear that the word “retire” loosely applies to Haller as she discusses post retirement activities that include a combination of work, traveling to see grandkids and leisure time that she’s planned for herself. “I’m not ready to retire retire, but to be on my own schedule and to be able to spend more time with my family, and garden, and read, so I plan to do that,” she said.

According to Haller, she’ll never be bored. “I run Village Impact Project, [VIP], the mentoring program and so I’m so excited to be able to do more with that — and really in the past, that’s what I’ve done all summer long. I teach yoga at the Wellness Center and I like to swim. I’m going to be working at Agraria for the big map out project at Mills Lawn and taking it to other schools — I’ve been on their board for a while volunteering there,” Haller said.

Sleep for an early riser like Haller is in her retirement plans as well. “I plan to sleep in until 5 a.m. instead of 4 a.m. I love mornings. I will still get up at 5, but I probably won’t set my alarm,” she said.

Also retiring this year is custodian Dave Wilson, whom the News was unable to reach for an interview at press time. Teacher and guidance counselor Dave Smith will be featured in an upcoming article when he retires completely from teaching in 2023.