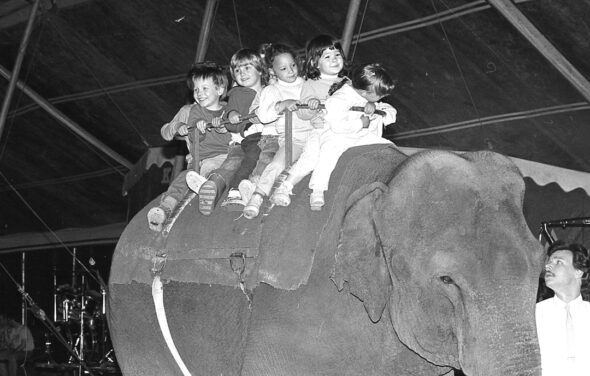 May 17, 1989: “‘The circus is in town, the circus is in town!’ That’s what they said, the children who saw the Kelly Miller Three-Ring Circus trucks roll by on their way to the vacant lot next to the Yellow Springs IGA.” The fanfare under the big top included a fire eater, prancing poodles, a dancing elephant (shown above), jugglers, a tiger, contortionists and more. (YS News archives)

“Curliss new Village manager. Coming out of an executive session that followed their regular June 4 meeting, Village Council members unanimously voted to offer the job of permanent Village manager to Laura Curliss, who has been the interim manager since February.”

Women, Inc. reunion. “Formed in the 1970s, Women, Inc. met monthly for 25 years over potluck dinners open to all women. Members … were responsible for the creation of the Women’s Park, the Feminist Health Fund, the Women’s History Project of Greene County, and a local celebration of Women’s History Month. The group also urged Wright State University to develop a women’s studies program.”

“Straw bale house to be focus of open house … Features include walls with an R42 insulation rating, deep window seats, tubular skylights, copper roof, radiant-floor heating …” [Jack Kline was the architect while Andy and Beth Holyoke were the contractors.].

DeWine graduates. “Richard Michael DeWine is a candidate to receive the Juris Doctor degree from Ohio Northern University Sunday. … After completing the bar exam this summer, Mike will practice law with the Nicholas Carrera firm in Xenia.”

Dump daylight hours. “The village dump [now Gaunt Park hill and pool] will be open only from 7 a.m. to 7:00 p.m. daily. … Persons dumping at night have been promsicously [sic] strewing refuse about the place.”

Electric power switch. “Dayton Power and Light will begin to supply [electric] power Jan. 1, 1948, when the contract of the village with Antioch College for power is terminated.” [The Antioch power plant was used to generate steam heat for the campus until 2008. Prior to 1948, it also generated electricity.]

“Vernet Could Give Board Nursery-Clinic Backing. The entire Board of Education met with Mr. Vernet and two other officials of the Vernay company Saturday afternoon to see if arrangements could be made whereby it would be possible for Mr. Vernet to subsidize a nursery school program and health clinic … [This became the Children’s Center.]

Postal address advice. “Yellow Springs residents can speed the delivery of mail to themselves if they instruct their correspondents to include the name of the street and street number on their address, postmaster Henry Grote advised this week.”

“The Yellow Springs Bicycle Club. We have perhaps the nicest, best organized and most graceful riders in this part of Ohio. The charming gyrations of our ladies are very bewildering to the inexperienced on the wheel …”

Ad: “Call and see my new stock of gasoline stoves. The old reliable Quick Meal is prettier than ever before, and the Insurance stove is so constructed as to render accidents impossible. … Geo H. Smith”

“The lime kilns have opened up for the spring and summer season. Mr. Dan Johnson is in charge.” [Located where the Glen parking lot is now, these coal-fired ovens baked limestone removed from the Glen.]

Antioch Baseball. “A large crowd of students will accompany the Antioch Base Ball club to Wilberforce next Saturday.”