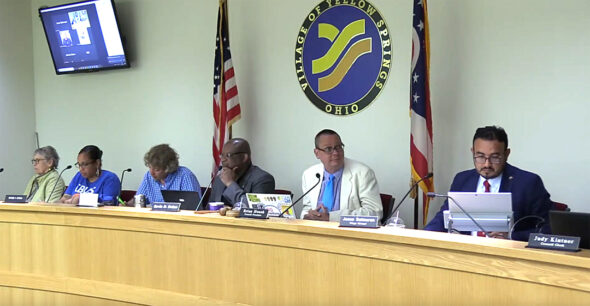 At their most recent regular meeting Monday, May 16, Village Council members considered credit card legislation that would place the Village in compliance with the State Auditor’s office.

State policy adopted in 2018 mandates that Ohio municipalities revise their credit card policies to include various sections covering, in part:

• Authorized users,
• Acceptable use,
• A policy for submitting receipts and
• Actions that qualify as misuse.

Village Solicitor Breanne Parcels and Finance Director Matt Dillon said an audit of the Village showed that the Village does have a credit card policy, but it had not been updated within the period of time the state set, which ended in early 2019.

“We had a section in our personnel policy manual, and when Matt came on board in October of 2020, we had an administrative credit card policy,” Parcels said. “However, we were not compliant with that section of the revised code.”

Parcels said that the measure must be voted on by Council in order to be in compliance with the state.

Council President Brian Housh asked Dillon why the policy hadn’t been updated. Dillon said that he was not a part of the Village administrative team when the state mandated the policy updates. Housh also addressed some of the changes to the policy, particularly the section on misuse.

“I have some issues with the misuse policy,” Housh said. “The state does not give any option for Council members to have any access to the credit card.”

Parcels said the Village has to define misuse and the potential ramifications of misuse, adding that she based the authorized users on prior Village practices. A copy of the legislation in the Council packet gives 10 examples of misuse, including any purchases that have not received prior authorization, purchases made by individuals other than an authorized user, purchases of alcohol or tobacco, receipt of cash refunds or in-store credit for any returns or exchanges and other things that would violate the Ohio Ethics code.

She indicated that Council could approve a budget so that its members could have access to a credit card. Dillon said that cards, which are issued to individuals, have not been approved for Council use.

Brown, seeking to clarify, said that there must be really stringent checks and balances to make sure that the Village is following the charter.

“Unless someone is an authorized user, they are not,” she said.

Dillon said that the checks and balances enable him to be more effective as the finance director, telling Council members that any purchase must first be approved through the requisition process.

“We’ve got to request the funds,” Dillon said.

“That language is not something I came up with off the top of my head,” she said. “I researched it, I used the Ohio Municipal League examples, and I looked at other communities’ credit card policies. So if you have questions, if you want it clarified, ask me.”

Parcels went on to say that any purchases for Council should be made through the Clerk. She said that Council could give themselves a spending budget when they appropriate the Village’s 2023 budget.

Housh said that he would like to have a second reading before approving the legislation, but MacQueen said she believed a vote would bring them to compliance faster. Stokes said that he didn’t think it would be harmful to come back to the legislation after the executive session at the end of the meeting.

Council members will hear a second reading of the legislation at the June 6 meeting.

In other Council business, May 16:

• Council heard and passed a second reading of a piece of legislation that would allow the village manager to continue energy contract negotiations with American Municipal Power, or AMP.

• Council heard a first reading on an energy contract with AMP. Salmerón said that some communities are experiencing price hikes, but that this legislation would allow the Village to purchase energy at a locked-in rate. This energy contract, which would last until December 2023, would allow the Village to purchase less energy through the general market. Council will hear a second reading at its June 6 meeting.

• Council passed a resolution to enter an agreement with Fillmore Construction in an effort to continue the Dayton Street stormwater reroute project. The project had been stalled after Ranger Construction, the company originally contracted to do the work, found bedrock and asked for a change order in the contract, which would have increased the cost of the project. The resolution and contract will cost the Village $168,186.75, or about 30% of the overall project cost.

• Council heard a finance report from Dillon, who received criticism from Housh for not including budget items approved by Council. Later conversation showed that Dillon had not received paperwork, and therefore did the right thing by not allocating funds.

• Council held an executive session to discuss allegations of financial impropriety. No information from that session was made public. A public records request to the open government unit of the State Auditor’s office regarding the complaint was denied because the investigation is still active.