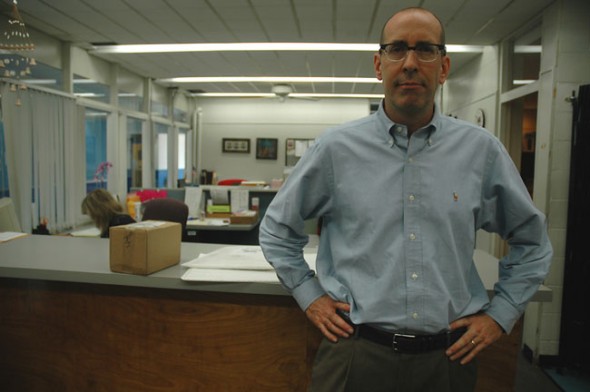 Tim Krier resigned as principal of McKinney Middle School and YS High School in September 2018 while on paid administrative leave; the resignation went into effect in April 2019. The resignation followed district and police investigations into allegations of sexual misconduct by a high school student and rising community concern over whether administrators acted appropriately to keep students safe and whether they might be held accountable if they didn’t. (News archive photo by Megan Bachman)

Krier resigned as principal in September 2018 while on paid administrative leave; the resignation went into effect in April 2019.

The resignation followed district and police investigations into allegations of sexual misconduct by a high school student and rising community concern over whether administrators acted appropriately to keep students safe and whether they might be held accountable if they didn’t. A district investigation substantiated the allegations that the student, who is related to Krier, engaged in harassment, sexual harassment and bullying. Subsequently the student faced criminal charges.

An investigation conducted by the district cleared Krier, then-Superintendent Mario Basora and the school board of any wrongdoing in the matter.

In a September 2018 statement to village parents and local media, Basora wrote that an outside investigation contracted by the district had determined that Krier “did not violate his legal obligation to report allegations of abuse or neglect to appropriate outside authorities (local police or Children Services).”

The stated reasons for the possible licensure suspension or revocation were that, in September 2017, Krier “engaged in conduct unbecoming to the teaching profession” by failing to “notify the superintendent or their designee of conduct that is detrimental to the health, safety, and welfare of students,” citing 3319.31(B)(1) of the Ohio Revised Code.

The notice goes on to state: “Specifically, while acting in your capacity as Principal of Yellow Springs High School, Counselor Shannon Morano reported to you that Student 1 disclosed to her that Student 1 was sexually assaulted and/or coerced into a sex act by Student 2 and you failed to timely report this to the superintendent or Title IX coordinator.”

That agreement stated that Krier’s licenses would all be issued, but that his high school principal and assistant superintendent licenses would immediately be suspended upon their issue through their expiration on June 30, 2025.

The agreement stipulates that Krier is barred from “performing any educational activities, coaching activities, or other duties within the State of Ohio that require an administrator license, certificate, or permit through the Ohio Department of Education during the suspension period.” He is also required to report the suspension on all future licensure applications.

In addition, Krier agreed that, upon the expiration of those suspensions, he will “not reapply for any professional assistant superintendent license, professional high school principal license, or any other administrator license, certificate, or permit with the Ohio Department of Education.”

Krier’s high school teaching license was also suspended from April 1, 2019, through June 1, 2024, with the final two years of the suspension stayed, allowing Krier to teach high school in Ohio effective June 1. The agreement further stated that Krier’s teaching license will not be affected by the same limitation on reapplication applied to his administrative licensure.

Following Krier’s resignation and administrative leave, he began working as an educator for Ventures II, a Franklin County middle- and high-school alternative education program overseen by the Ohio Educational Service Center. According to the Ventures II website, the program centers on “students in need of social, emotional and behavioral interventions.”

Krier also provides educational consulting work through his own firm, Edusortium Consulting, which was established in 2019