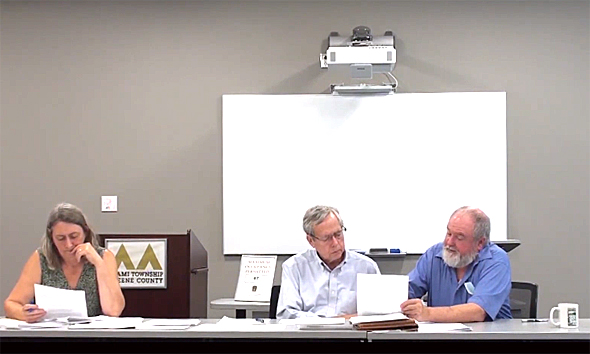 At its July 18 regular meeting, the Miami Township Board of Trustees responded to and discussed a letter it had received from the Yellow Springs school board. Present at the meeting were trustees, from left, Marilan Moir, Chris Mucher and Don Hollister.

At its July 18 regular meeting, the Miami Township Board of Trustees discussed and responded to a letter it had received from the Yellow Springs school board. The letter, penned by Board of Education President TJ Turner, lays out frustration expressed by school board members at their July 14 meeting following the news that the trustees had voted to place a new operations levy on the November ballot.

If approved by voters this fall, the 3.5-mill levy will generate about $670,000 per year for Miami Township Fire-Rescue to pay fire and EMS personnel.

The letter from the school board, which is addressed to trustees Chris Mucher, Marilan Moir and Don Hollister, expresses disappointment that plans for the levy were not shared or discussed with the school district and Village government before action was taken, citing a reported agreement between the governmental bodies to do so.

The letter reads in part: “Several years ago, the Yellow Springs School District, the Village of Yellow Springs and Miami Township recognized the challenges in sharing the same electorate to a large degree. With that fact in mind, we all agreed to publicly share our financial concerns and plans through the Yellow Springs Development Corporation. … We are extremely disappointed that this conversation did not occur, and the school board and members of our public first learned about your levy measure when reading about it in the Yellow Springs News.”

The letter goes on to request that the Township, Village and school board “cooperate in regard to [any] request for funding from [the] community” and suggest that a public meeting be held where “each organization can outline their financial needs and upcoming plans and begin this important conversation with [the] electorate.”

Hollister, who serves as the Board of Trustees’ liaison to the YS Development Corporation, confirmed that, though he and liaisons from the school board and Village have met and spoken at large about the year’s tax calendar and expiring levies, they had not spoken about the Township’s intention to move forward with a new levy.

“It’s not that it’s been dead air, but in this example, we haven’t gotten to the stage of collaborative partnership talking about our finances,” Hollister said.

Mucher said he understood the school board’s frustration, but added that, in his opinion, the need for additional funds to pay Miami Township Fire-Rescue staff speaks for itself.

“Our needs are just so simple compared to the village’s and the [school district’s] — we want to pay EMTs and firefighters. That’s all we want to do,” he said.

Moir and Hollister expressed a desire to strengthen communication across governmental bodies in general, and for any future levies under consideration.

“I think it’s to our benefit to have informational meetings,” Hollister added, and resolved to speak with representatives from the school district and Village about holding a joint meeting and report back to his fellow trustees at the next meeting.

Assistant Chief Denny Powell presented the Miami Township Fire-Rescue, or MTFR, activity and expenditure report to the board in the absence of Chief Colin Altman, who was attending the Ohio Fire Chiefs Association conference in Columbus.

Powell reported that MTFR recently completed a rope rescue technician course, certifying 10 members of the department. He added that MTFR’s Training Center had added a new American Heart Association discipline to its offerings, improving education for EMS and hospital staff on how to recognize and respond to stroke victims. The MTFR Training Center is the only center in the Miami Valley to provide the training at this time.

The board approved the purchase of replacements for two pieces of nonfunctioning equipment that Powell said are integral to MTFR operation: a thermal imaging camera, which allows firefighters to see through smoke and detect heat from a potential fire; and a multi-gas detector, which analyzes present gas levels and can help detect gas leaks. The replacements cost $1,500 for two thermal imaging units and $2,713.20 for a new multi-gas detector.

Powell and the trustees also responded to a letter the Township received from a villager who lives near the fire station. The letter addressed a motorcycle convoy originating in Clark County that recently traveled through the village on U.S. 68. The approximately 150 motorcycles that made up the convoy, which Powell reported was being held as a fundraiser for law enforcement, were permitted to drive through the MTFR station; this is the second year the group has done so.

The letter complained about the noise generated by the vehicles. In response to the letter, trustees advised MTFR leadership to let the Township know in advance when the convoy will be traveling through the village, particularly if motorcycles will be allowed to drive through the fire station.

• The board approved an agreement with the Greene County Engineer to provide pavement marking for South River Road in the township.

• The board adopted a resolution to amend permanent appropriations, authorizing an increase of $5,000 to pay for contracted services from the general fund and an increase of $4,000 from the gas tax fund to pay gas bills.

The next meeting of the Miami Township Board of Trustees will be held Monday, Aug. 1, 5 p.m., in the MTFR community meeting room.