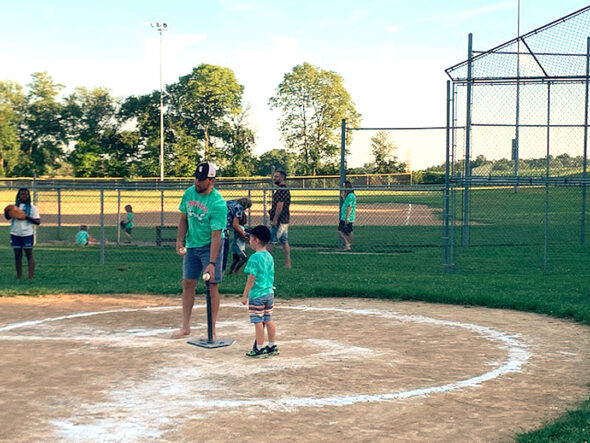 With a 1,000-strike rule, every trip to the tee ends with a hit in Perry League T-ball. The last game of the 2022 season is Friday, July 29. Game play will be abbreviated and conclude with the annual potluck picnic and cookout and the awarding of trophies for all players. (Submitted photo)

By Yunus Brevik and Margi and Rob Gay

The explosive growth of corn crops along country roads was evident this week. The corn now has tassels at the top of its stalks, signaling a period of growth farmers refer to as “silking,” which is the beginning of the last growth cycle of the crop, a clear sign the days of summer are waning.

Much like the development of corn crops, we have watched our T-ballers grow and change dramatically over the course of the season. Although it wouldn’t seem to be enough time to see changes in the development of a child, our observations indicate that eight weeks is significant! The most obvious signs seen in our participants are those who have experienced growth spurts.

Aiden, 6, is an example. He debuted in the first game of the year. Tiffany, his mother, revealed he’d been vacationing with various family members, therefore missing contests in the middle of the season. Upon his return, his increased stature was obvious. When approaching the plate, he made it clear, he wanted to be announced as Aiden Scott!

We see many Perry Leaguers with changing complexions after play-filled days spent at Gaunt Park Pool.

Allie, 6, arrived early for our most recent game on Friday, July 22, with her bubbly personality, sporting golden locks bleached by the sun.

Some changes are physical in nature, others are more focused on improvement in executing the skills required to play T-ball.

Cardi led off Friday’s game, stating she’s “4, almost 5” and spelling her name. She displayed a knack for connecting squarely with the ball, then traversing to first base at a blistering pace.

The flame bat found its way into the hands of many; it was by far the most popular choice of the evening.

Ren, 5, used that flaming piece of equipment to produce hits that created a resounding “thwack” upon contact and then displayed his speedy feet!

Ellie, 5, chose the flame bat, resetting three times, with the third time a charm — a strong hit down the first-base line.

Evelyn, 5, actually, Evelyn GRACE, she made a point of saying, also went for the flame bat, getting a good hit after reset, straight down the first-base line.

Sarah, 5, did not disappoint and thrilled us with her 360-degree circle style at bat. And when she reached home plate, mom Pam was there to provide a congratulatory hug.

Evadene, 5, chose the ever popular purple bat and had a good hit down the center.

The 6-year-olds had a strong showing: “Am(bear),” 6, prefers Ambear over Amber because she likes bears. In her turn at bat, she had a smooth hit down the center on the second try. Allie, 6, made a “bouquet” of the four small wooden bats and carried them up to the tee. Allie told Coach Yunus she had to try each of the four bats, then gave a diabolical Mwu-ha-ha-style laugh. True to her word, she had a good hit right down the center then ran the bases after hitting with the fourth bat.

Erma, 6, made multiple hits to the tee instead of the ball and said multiple times, “That didn’t work.” I told her, “You’ll find a way that works.” Her latter times at the plate had significantly fewer misses. Progress!

Representing the 7-year-olds: Fiona, as per usual, had a strong hit that went in the third-base direction. Violet, 7, enjoyed a very good hit at her at bat.

And for the littlest littles:

• Isabel, 2, had her FIRST AT BAT after halftime and used the lucky caterpillar bat.

• Mahni, 2, was cute as could be, and employed a distinctive sideways swing using the bat’s knob for a billiard-style hit.

• Levi, 2, ran out after hitting his ball and gave it a little kick to make it go further.

• May chose the caterpillar bat, hit well and ran after her own ball. Dad helped her run to first base. Thanks, Dad!

• River, 3, displayed a BIG smile after a hit with Coach Dad helping him swing. River did NOT want to swing without dad’s help.

• Hezzy, 3, carefully selected the green bat, starting off a good five feet from the tee, before moving closer, swinging a bunch, moving a few paces closer, swinging, moving, swinging, and eventually getting close enough to the tee before hitting.

• Teddy, 3, hit and fetched his own ball, then ran out to the adjoining field to play in the dirt. The dirt is definitely Teddy’s happy place.

• Three-year-old Charlotte approached the tee with the green bat, her Perry League hat sporting chalk handprints. She performed a few strong practice swings in the circle and then had a good hit down the center line.

• Joaquin, 4, waited for the lucky purple bat and proceeded to do a few practice “air swings” to warm up; that effort paid off with a solid hit to center field that reached all the way to the outfield.

• Another 4-year-old wore both sunglasses and a seriously determined look. She used the “chopping style” batting approach at the tee. She may have broken a new record for strikes. But as we all know, here at Perry League, we have a 1,000-strike rule.

As usual, there were lots of non-T-ball related activities going on around the diamond, many involving the infield dirt or striping chalk used to mark the field.

The third-base line has become something of a research park. Often the developmental work begins prior to the start of play. Castle-building and dirt/mud pie creation experiments are serious business and are often the focus of T-ball time for these innovative children.

Valkyrie, 6, as she was making mud cakes with Evelyn, 5, told me she changed her name to Teesha, but was not sure how to spell her new name. She could, however, spell “is,” “to” and “love.”

One young lady displayed amazing ball-handling skills as she managed to keep control of five balls in her arms.

We again took a “halftime” break in the action to enjoy freeze pops, watermelon and water, getting a respite from the hot temperatures in the high 80s. These breaks are a new addition to Perry League this year. They have been well-received and we anticipate continuing them in future seasons. We greatly appreciate the contributions from all who facilitated this week’s treats.

Artie, one of our many trusted volunteers, entertained everyone with his juggling abilities during the break. He has displayed his own rays of sunshine this season by feeding extra balls to the fielders from outside the first-base line. Artie wittily describes Perry League as a “3-foot-tall riot,” a perfect representation!

Steve Deal, hands down the most dedicated grandpa on-field, had a slightly different perspective. The term he used to describe Perry League is “organized chaos.” Steve also mentioned that “organized” isn’t always applicable.

We were pleased to welcome a few new attendees to our weekly T-ball gathering, most of whom quickly found their places on the field.

Freya and her two sisters joined us this past Friday. Freya remarked, “the game is so easy, you just have to catch it and throw it back!” All three sisters flourished in their first appearances on the field.

Ayanna, 2, joined us for the first time and fit in some playing time in between sticking close to Dad.

Orion, who was visiting from Nebraska, seemed to fully embrace the experience, displaying smiles closely resembling rays of sunlight.

We were thrilled to see one of our former T-ballers return; she was the BEST bat keeper ever!

Louise, all the way from France, kept all the bats orderly in a neat row and even cleaned any dust and chalk off with a brush. When asked what treats she’d like to see next week, she unabashedly said “Rice Krispy Treats and Skittles.”

Toward the end of the game it was noticed there were two Evelyns and Evadenes gathered at the third-base line. What are the odds?

As the game was coming to a close, we noticed we now finish playing in the shade, another sign of the progression of the season.

Our final batter of the evening was Aiden Scott, who produced a strong hit followed by circling the bases in record time. He was very happy!

The support of families and volunteers is an integral part of the program and much appreciated. A special “Shout Out!” to Mary Margaret who has been our batting circle scribe for much of the season — a great help for the newspaper articles. Thank you, Mary!

The sun will set on another season of Yellow Springs Perry League T-ball as we close out the 2022 schedule this week, Friday, July 29.

The season’s final Friday will feature the traditional community potluck picnic and cookout, along with abbreviated game time and the trophy presentation, where we recognize the players’ efforts.

We have added a new event for the adults that we’re anxious to launch, so parents come prepared to enjoy a special final closure to the season. See you there!