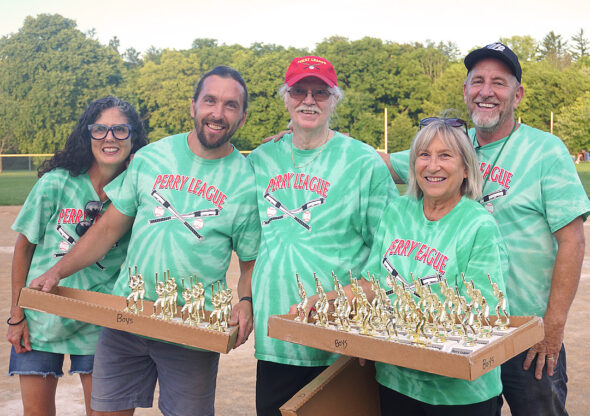 Coaches Margi, Yunus and Rob are joined by Coach Emeritus Jimmy and Perry League scribe Mary Margaret in handing out trophies to each player. (Photo by Jessica Thomas)

By coaches Yunus Brevik and Margi and Rob Gay

It’s unlikely the namesake of the Perry League T-ball program, Donald Perry, could have imagined the longevity of the program when it was formed decades ago.

Perry wanted to create an opportunity for younger children to participate in the game of baseball, and formed the village’s first Little League in the 1950s. In 1970, three years after Perry’s death, Minor League coaches Hank Chapin, Bob Dixon and Jonas Bender renamed the league, which had begun incorporating a tee into play. That same year, Perry League created so much interest that girls wanted to play, too — and they have ever since.

The efforts of Perry, Chapin, Dixon and Bender were made for the love of children and community, and for this we are so thankful and are dedicated to continuing this mission.

Time most certainly flies. Perry League Summer 2022 is a wrap! Although the final game on July 29 was abbreviated due to the annual cookout picnic, there was plenty of action on the T-ball field.

Miles, 14 months, had his first hit ever, and it was really good. Naomi returned from seasons past for the first time this year, and enjoyed a good at bat. Thea Brevik, 6, was ready for her first at bat of the season. Typically, Thea is found with her freckled face and gal pals in the outfield playing in the sand and chalk. She also fielded many balls July 29 after enjoying fielding for the first time at the prior week’s game. Raelynn, 6, had a good hit down the center. Mom called, “Run!” after Raelynn spent some time admiring her hit from the plate. Jules, 3, made his T-ball debut and came to the plate with support from his uncle, a former Perry League T-ball player. Evadene, 5, sported an all-star tattoo that matched her purple bat choice and purple mermaid outfit. Marco, 5, took lots of practice swings in the circle, then came to bat and rocked side to side, shifting his weight from foot to foot, building momentum before swinging and had a solid line drive. Parker chose a BIG bat and took a lot of practice swings in the circle before connecting squarely with the ball.

Irma showed improvement just from last week, hitting the ball much easier and with fewer tries, and it went farther too! Evelyn, 5, had some really fast one-handed practice swings. John, 7, was very much a gentleman and let a first-time batter, too little to wait too long in line, bat in front of him. Thanks, John! Ripley, 6, chose a flame bat for his at bat. Josie, 4, was very determined and focused and it paid off with a good hit down the center. Jennifer used a one-handed swing for her at bat. And it worked. Julia, 8, took her time. She studied all the bats and the weights of the bats, then thoughtfully chose the purple one. Good choice, good hit.

We get a lot of great intel at home plate: Juniper, 5, came up to bat with her stuffed duck, Quackers (who is shy), peeking out of the neck of her tie-dye Perry League shirt. She told me Quackers wasn’t old enough to play yet because he’s not 16 or 17. Arlo told us he’s turning 6 on Aug. 8. Laurelai, 6, says she’s “going to try to be a good hitter.” Allie, 6, arrived at bat attired in a Jack Skellington hoodie dress and stated she likes the “Nightmare Before Christmas” movie. Clay, 9, let us know the flame bat is his “favorite.” Later, while others were eating and the game was at a much slower pace, he made an adventurous attempt to hit with two bats at once. Gwen Jordan, 6, at her up to bat said [I’m] “really good at this” and shared that she was very excited for the picnic. 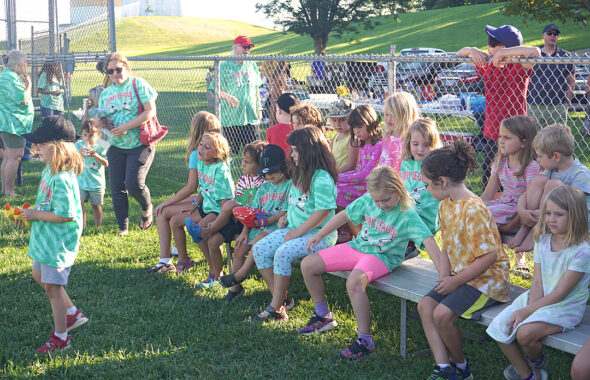 The 2022 Perry League season closed with a celebration of baseball and community. Above, T-ballers sit on the bench awaiting a final turn at bat. (Photo by Jessica Thomas)

Speaking of the picnic: “picnic” does not do it justice. “Banquet” is more like it. Wow, what a spread of good food! Lots of goodies including a bouquet of cut wildflowers for the table from the Badger family (thank you!), guacamole, black beans and rice, watermelon, chips galore, cute hamburger cookies, delicious vegan potato salad, corn on the cob and many, many other yummy contributions. Oh, and hot dogs, of course. Some of the leftovers went to feed Matt Raska’s chickens, and a few nonperishable items left on the table went to the little pantry. Thanks to everyone for the wonderful contributions. It was great to enjoy a meal together.

Beth Brevik thoughtfully supplied temporary tattoos for the skin decoration enjoyment of many. On the bench, Freija was really excited to show her not-yet-stuck-on-to-skin temporary tattoo collection, and displayed it like a deck of playing cards.

Also discussed at the batting bench was lost teeth. Evelyn, 6, lost one in her mac and cheese the previous evening. Theo, 4, informed me he has a loose tooth, but wasn’t sure which one. Imogene, 6, had both lower teeth lost one day apart from one another. All said the losses were without pain or much blood — whew!

Beckett, 2, was seen hanging around the bench with grandma Beth smiling and flashing his dreamy Paul Newman blue eyes. Later he had a mighty hit and good run after his own ball.

Jack, 3, when he wanted to take off his T-ball shirt, was told by mom there is a rule in T- ball to wear a shirt. No shirt, no T-ball. However, he may go without shoes as per usual. Alan Engler was spotted happily puttering around the field, chasing balls always with a smile on his 3-year-old face. We’re not sure who had more fun, Alan or his parents, Aaron and Lindsey. They seem to be always smiling, too. Maybe it’s genetic?

Coach Jimmy made an all-star appearance and seemed to really enjoy assisting Becky at the batting bench, and filling in at the tee with Margi when Coach Yunus stepped away to eat from the T-ball banquet.

The big excitement for the kids was trophy time! We had one for each child — either a “Helmet” or a “Ponytail” trophy. Eden, 2, was hesitant to accept her trophy but once it was in her little grasp she was all smiles. Jack held his watermelon in one hand, trophy in the other. His friend, Callie, held her corn cob in one hand, trophy in the other. The trophy distribution provided many photo ops taken of children beaming with trophies held up proudly. The joy seemed to be contagious as parents and families were seen smiling all over the field. 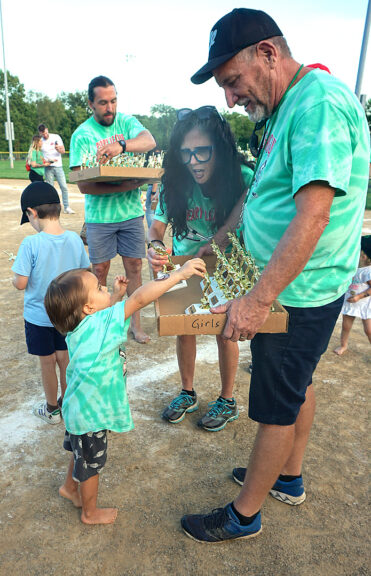 At the last game of the nine-week Perry League season, Friday, July 29, participants lined up to receive their trophies, adorned with either a helmet or a pony tail. Above, coaches Margi and Rob Gay congratulate Jack, 3, on a good season. (Photo by Jessica Thomas)

The big excitement for the adults was the adult T-ball game — perhaps a new T-ball tradition? Sarah Badger, mom to David, was first to bat. She seemed a bit nervous about her ability to hit the ball, but had no trouble connecting the bat to the ball very nicely. She was seen smiling, looking pleasantly surprised with her hit. Later in the game, dad Dan Badger hit into the outfield and sprinted the bases for an inside the park home run.

Some grown-ups also took advantage of our 1,000 strikes rule. Jessica Thomas, mom to Callie, needed a few practice swings before hitting one into the group of adult T-ballers.

Jacob Fink, dad of Erin and Sarah, had a solid hit. And he said he hadn’t swung a bat in decades! Louise, 10, kept up with and batted well with the adults. Nicole Gay, mom to Clara and Alice, fielded her position nicely. Dad Bryan lofted a hit deep into the outfield, but those seriously competitive parent outfielders were determined and caught the ball. Joaquin’s mom, April, also seemed unsure about hitting and had a really decent hit. Chris Triplett, dad to Zaria and Ronan, was able to make it after work before the end of the game, and had a great hit while mom/grandma Thad supported from behind the fence. Another parent was thrown out at first from the outfield. Sarah, Allie’s mom, told a few kids nearby to “stand back because I don’t know what I’m doing,” yet she hit just fine.

And, let’s hear it for the grandparents. Mary Margaret, grandma to River and Thea, had a nice hit. Coach Rob, aka “Grampy,” had the last hit of the evening. Not bad for a pick-up game!
We had several Minor League kids join the adult game after their game ended on the adjoining field. One of the visiting Little Leaguers slid into home! Another Minor League kid, Rocket, big brother to Imogene, really liked the vegan hot dogs.

We consider this to be a fun and successful season. We had a couple of “half-times” with icy treats and water bottles, water balloons, juggling T-balls, a mud pit, dirt and chalk cakes, a great cookout and a first ever adult T-ball game. It was truly a group effort, and we appreciate everyone’s participation, whether regularly or once or twice this season. There were many volunteers — too many to list, but please know we appreciate all the help and support.

Special thank yous to: Tom and Nick, our grill masters for the cookout; Becky Reed, we appreciate your dedication, minding the bench, loving all those George’s, and for the great advice; Beth Brevik, Yunus’ very organized lovely wife who has great, fun ideas; Denny Mrozinski and Artie Isaac, our first-base line entertainers and ball throwers; on base couples Jake and Emma Schmidt and Kyle and Heather Ficke; Aimee Garcia and Steve Deal were regular on base helpers as well; and Mary Margaret, our batting circle scribe.

That’s it for the Yellow Springs Perry League 2022 season. Perry League is Yellow Springs’ all-volunteer program that is noncompetitive, free and open to children aged 2–9, regardless of their race, color, creed, sexual orientation, gender identity, ethnicity, spiritual inclination or practice, ability or disability. Thanks again to everyone, it was a blast!