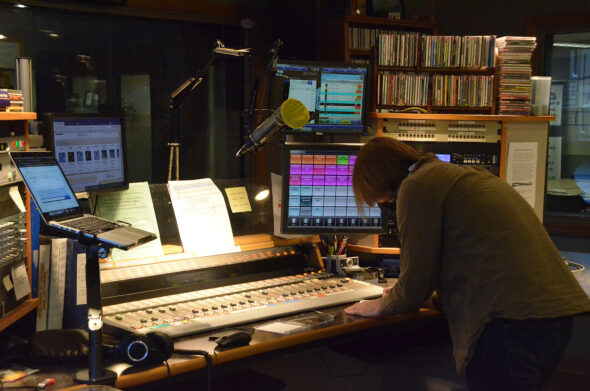 A recent funding allocation of $566,000 from the Ohio state capital budget has provided an opportunity for WYSO to strengthen its local presence in Yellow Springs and its listening audience in the greater Miami Valley region.

The money comes from two sources: $266,000 is WYSO’s share of a group state budget allocation request from public radio stations across Ohio, and an additional $300,000 that General Manager Luke Dennis credits the Miami Valley legislative delegation — a group of state legislators with districts in the Miami Valley that who advocate on the state level for funding of local projects — with  helping the station to secure. He said it was the first time the station worked with the delegation.

“The reason we were successful is because some of the local legislative delegation listens to WYSO. They’re Republicans, but they understand that we are a community station. Really, the guy who stood up several times to advocate for us is Rep. Brian Lampton from Xenia,” Dennis said.

Money provided by the state will be used to purchase new equipment — part of a $2 million total equipment budget. Dennis said that WYSO will use the funds to replace all the consoles in the station’s studios, including WYSO’s new satellite location in the Dayton Arcade. The new consoles will give WYSO the ability to link “interconnectivity between the Arcade and Yellow Springs.”

“They will talk to each other, and we can even go live from the studio in the Arcade if we ever had to,” Dennis said.

“Our headquarters would always be in Yellow Springs, our main center of operation would be in Yellow Springs, but wouldn’t it be cool to have a small satellite location in downtown Dayton where all the people are, and where the high school students we work with from Montgomery County who don’t have transportation to Yellow Springs could get on a RTA bus and work with us there?” he asked.

Dennis said the location is ideal for the station.

“It does everything we need. In that small room it’ll have a recording booth with three mics, and then a large conference table with 10 chairs, and then a great big screen so we can have meetings there. We can even teach a class or two there, like an audio editing class or something,” he said.

According to Dennis, the 500-square-foot location could also be an important site for audience growth.

“Having a store-front location in downtown Dayton would be an important part of our audience growth strategies, where people would see our sign and say, ‘what’s that?’ So, we never thought about moving our headquarters there, but we got interested in the Arcade early on when they started renovating it, and we saw how beautiful it was going to be, what a perfect location it is,” Dennis said.

But Dennis said WYSO didn’t want the new location to “dilute or distract us from our important fundraising that was happening for the Union Schoolhouse.”

“There wasn’t a real urgency there because the schoolhouse is our top priority, but then a donor said he was most interested in helping us open a satellite and made a lead gift. At that point, we said, ‘OK let’s do it,’ and secured a few additional gifts, because it’s only a 500-square foot space.”

Dennis declined to state the amount of the gift from the Charles D. Berry Foundation, but said it was significant enough to green-light the project, he said.

“That’s a name that’s known to WYSO people because he used to be on our board, and he helped us buy our license from Antioch. He used to do it as an individual — he’d write checks as an individual guy,  but now he has created a formal foundation,” Dennis said.

According to Dennis, the station will utilize a scheduling system where reporters can reserve the space for projects.

“Half of our team lives in Dayton, so maybe Jerry Kenny [Host of All Things Considered and producer for WYSO Weekend] wants to work downtown for the first half of the day before he drives to Yellow Springs, and maybe he’ll have an interview where it would be more convenient to meet in Dayton,” he said.

Dennis also said the publicly owned station sells underwriting, which is defined by NPR as “third-party pieces read aloud by station personnel that are technical and informative, allowing listeners to form their own opinion about the product or service.” WYSO plans to use the Arcade location to provide those services to clients. The Arcade satellite will also be a meeting hub. “We’ll have some of our board meetings there and some of our community advisory meetings there.  When there are public events like a first Friday, or if Levitt Pavilion has a really amazing show, we will activate the space by having a table out or a tent, or something that says, ‘come over and talk to YSO’,’’ Dennis said.

Plans are for the satellite location to be operational by January 2023, but there are renovations that will happen first. “It’s a big, open, empty space right now. We’re going to have to construct drywall partitions. There is a cool, historic, pressed tin ceiling that we might try to keep parts of,” he said.

According to Dennis, the station still plans to be operational at the Union Schoolhouse by Jan. 2024.

“Some really important building permits were recently approved for the building by the [Village] building department last week. That means that people will finally start to see visible signs of activity on the property very soon,” he said.

“There are some swifts who have started going in the tower. It’s not a whole colony, but it’s promising. We capped the old chimney so there’s no danger of them nesting, and us then disturbing them. It’s not like you snap your fingers and then they live there, but I think it’s promising that they’ve noticed it,” Dennis said.

Dennis also said that WYSO staff have been particularly dedicated to the swift relocation process, and they want to be known as “the station who has the chimney swift tower.”

“We had a staff member who went over many nights and played recordings of ‘chimney swift songs’ to try to lure them in. A lot of people really care about that project,” he said.

Dennis was also appreciative of Yellow Springs News staffer Reilly Dixon, who is a member of the Village Environmental Commission and raised awareness of the swifts’ plight to the station.

“I have to give a ton of credit to Reilly, he’s the one who brought it to our attention, and he’s been a resource to us. I am really grateful to him. I am glad he brought it up,” Dennis said.

Along with the procurement of vital equipment and the expansion of station locations, WYSO is also growing its workforce. “We have three open positions at the station that are very important for our continued growth and public service expansion,” Dennis said.

According to Dennis, the station has two open reporter positions in the newsroom and is looking for an assistant director for WYSO Community Voices. “That’s a really big hire. Nina [Ellis] needs that person in there. That will make four full-time people in the center — we’re doing a national search, and we’ve done two first round interviews,” he said.