This past Saturday, Sept. 24, the Yellow Springs High School and McKinney Middle School cross-country teams ran at the West Liberty Ohio Caverns Invitational. This hilly course, which traversed the grounds of the Ohio Caverns, produced season-best times for the majority of the Bulldog runners.

The McKinney boys finished in fifth place out of 14 teams, with the majority of the team running season-best times. Eighth-grader Wills Oberg medaled with a best ever time of 12:47 while running to an 18th-place finish. Seventh-graders Alex Lewis (31st), Matteo Chaiten (36th), Maddox Buster (50th), Alex Main (55th), Oshri Paschal (56th) and Cooper Folck (57th) ran as a solid pack and were closely followed by Charlie Carr, Graham Turnmire and Jaden Douglass.

Coach Isabelle Dierauer attributed these strong performances to a solid week of practice and the runners rounding into shape as they prepare to peak for season-ending meets.

This Saturday, Oct. 1, the McKinney teams will compete at the Jim Murray Invitational, to be held at the Clark County Fairgrounds at 10 a.m. The high school teams will run at the Centerville High School Saturday Night Lights Invitational at 7 p.m.
—Coach John Gudgel 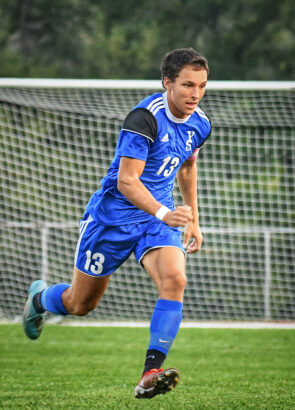 YSHS Senior Eli Eyrich made his 100th career goal Sept. 22 in an away game against Emmanuel Christian. (Photo by Michael Knemeyer)

After suffering one loss in an otherwise undefeated season, the Bulldogs rallied with another pair of wins on Tuesday, Sept. 20, against Miami East at home; and Thursday, Sept. 22, against Emmanuel Christian away.

Seniors Eli Eyrich and Dylon Mapes again led in scoring against Miami East in the 4–0 match, with Eyrich bagging three and Mapes rounding the score out with one. Senior goalkeeper Krishan Miller ably covered the Bulldogs’ goal with 15 saves.

In a 5–0 match against Emmanuel Christian, Eyrich netted three more goals, scoring his 100th career goal in the process. Mapes and Senior Henry Smith-Heston netted a goal each, and goalkeeper Miller racked up five saves, again keeping the opposition scoreless.

The team’s record is currently 8–1; the Bulldogs were scheduled to face off against Miami Valley School Wednesday, Sept. 28; Xenia on Saturday, Oct. 1; and Greenon on Monday, Oct. 3. All three matches will be played at home at 7 p.m.

The Bulldogs continued their winning streak with three victories on Thursday, Sept. 22, against Jefferson at home; Friday, Sept. 23, against Wilmington Christian away; and Saturday, Sept. 24, against Ansonia away.

The Bulldogs pulled off another 3–0 shutout against Wilmington Christian. Longshaw led with a staggering 22 kills, followed by six from Adeline Zinger, who also led with 20 digs, followed by Babb’s 18.

Individual stats for the Ansonia match were not available at press time, but Yellow Springs walked away with a 3–1 win.

The team will oppose Dayton Christian away Thursday, Sept. 29, 7 p.m.; followed by 7 p.m. home matches against Xenia and Middletown Christian on Monday and Tuesday, Oct. 3 and 4.

The team’s overall season record is currently 10–4, with a conference record of 3–1.