My Name Is Iden | The Blues Man’s Daughter

My dad must have understood that, because he never fought the blues within him. He embraced it, and by the time I was born he was already well and truly a Blues Man.

I grew up listening to my dad, and the many bands he played in, rocking out the blues every Sunday night. We had stacks of blues records in the house. Blues CDs piled on every surface. There were magazines, songbooks and biographies of all the great blues heroes. We had blues on the radio and the TV. The man kept a guitar pick on his keychain and a harmonica in his glove compartment, for heaven’s sake!

Dad loved the blues. It was who he was. The only thing he loved more than the blues was sharing the blues. Especially with his son.

Most of my happiest memories of our time together centered around music. Many was the school night that I spent out late in a bar listening to the blues. We traveled the country together selling and trading — but mostly buying — vintage guitars, spent hundreds of hours looking for treasure in record stores and pawn shops — so many pawn shops! — and of course, the weekly guitar lessons that we shared. We were a great team, a Blues Man and a Blues Man’s son. Except that my dad never had a son. 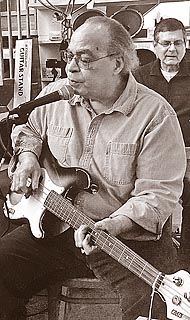 By the time I came out to my dad as a transgender woman, he was already very ill. He was living in a nursing home and we had been separated by the pandemic for many months. He had difficulty speaking on the phone, and I wasn’t sure how much of what I’d just told him had been understood. I didn’t know if he understood what my being trans meant. I definitely didn’t know how he felt about it because, for all of the fun we’d had and all the time we’d shared, the two of us weren’t great at sharing our personal stuff. We didn’t talk feelings. We talked blues.

Parkinson’s disease is a terrible thing to watch. As my dad’s illness progressed I watched as his musical skills declined. It broke my heart to see. Not just because he was a gifted player, but because my dad was a Blues Man. Music was his life, the air he breathed.

Eventually, he wasn’t comfortable performing anymore. It wasn’t long after that that he came to my house and gave me his hat.

Somewhere during our adventures my dad had come into possession of a stately, and quite deeply bluesy, black fedora hat. This hat was the tall, wide brimmed, variety of fedora. The sort of hat Al Capone would have respected. He began wearing this hat during his performances. I remember seeing my dad in that hat, that Blues Man, up on the stage, blowing thunder out of his harmonica.

When he couldn’t wear that hat anymore he gave it to me. He didn’t say anything about it, just that he thought I could use it. I put it up on a shelf in the closet. It stayed there for six years. I didn’t think I would ever wear it. Hats like that weren’t really my style. But I kept it because it was my dad’s and it seemed important to him that I have it. It wasn’t until I myself came out of the closet that I put on my dad’s hat.

Gender transition is difficult and confusing. It is hard to find yourself after wearing a disguise for so many years. After eight months of transition, I thought that I knew who Iden was, and I did, mostly.

But I was missing something. I still felt like I was hiding.

It was Easter and I was waist-deep in my closet trying to find something. I wasn’t happy with how I looked. I didn’t look like me. I needed something else. Something special. There, way up on the shelf, was the hat. My dad’s hat. I put it on and stepped in front of the mirror. That was the day that I knew I had finally found myself.

I was sitting with my dad in hospice. He was asleep. I was drawing, waiting for him to die. The blues was playing on the TV, and I was wearing his hat. I hadn’t planned that, it was just the right hat for my outfit that day — I have many hats now. Turns out I was a hat person after all — so I’d worn it.

There were two quick knocks on the door and in glided his nurse. She told me they didn’t expect it to be much longer before my dad passed. We talked briefly, and she complimented me on my hat. I told her that my dad, that man there in the bed, had given me this hat.

I hadn’t thought about what an important part that had played in my transition until that moment. Until I said, out loud, the words “my dad gave me this hat,” I hadn’t understood. I had found so much more than a new aesthetic the day I put on the hat. I had found my confidence. I had found my courage and my strength, and God how I’ve needed that strength.

You are who you are. You can’t fight it. You can’t hide from it. Sooner or later it will come out.
Sooner or later you step in front of the mirror and meet yourself for the first time. My dad knew that because he was a Blues Man.

When it was time for me to go, I put my hand on his shoulder, stroked his bald head. I looked at his drawn face and tried to see the harmonica player’s cheeks that I remembered from all those years before. I gathered my things and put my hat on. At the door I turned back. “Hey, one more thing Dad,” I said. “In case I don’t see you again, thanks for the hat.” The blues were playing softly as I walked out of the room.

*Iden Crockett is an artist and writer. She lives in Yellow Springs with her wife and three children. You can follow her work at http://www.mynameisiden.com.

Topics: My Name Is Iden, music