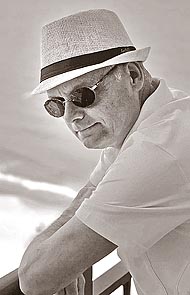 In addition to his parents, Steve was preceded in death by his brother, Billy Wilson; his father-in-law, Floyd Merritt; and brother-in-law, Rick Ward.

He is survived by his wife and best friend, Kay (Merritt) Wilson, whom he married Nov. 21, 1983; his children, Kenneth (Angela) Wilson, of Greenwood, Ind., and Tiffany (Mike) Edmund, of Beavercreek, Ohio; grandchildren, Kaleb, Alivia, Karley, McKenna and Liam; mother-in-law, Joyce Merritt; sister-in-law; Karen Ward; and a sister. He is also survived by his pug, Biscuit.

Steve retired from Yellow Springs Schools after 33 years of service. He was proud of his work as a custodian and enjoyed interacting with the students and faculty. Steve was a hard worker, having multiple jobs throughout his life to provide for his family, including: Bonded Oil Co., Weaver’s Market (now Tom’s) and Antioch Publishing. He was extremely devoted to his family and was very proud of his children. Steve liked to take them camping and fishing regularly. He also took great delight in being “BB” to his grandchildren. He had a dry sense of humor and never missed an opportunity to tell a joke. He always said he aspired to be a stand-up comedian. He was also a professional “treasure hunter.” He knew which thrift store to search on which day to find the best bargain, often upcycling his finds into artwork.

Nine months ago Steve was diagnosed with liver cancer and given a bleak outlook of 3–6 months. He fought hard to make sure he was able to spend as much time as possible with his wife, children and grandchildren. His family is extremely appreciative of everyone who prayed and offered support to them in any way during his illness.

A service to celebrate Steve’s life will be held at 11:30 a.m. Saturday, Oct. 8, at McColaugh Funeral Home, 826 N. Detroit St., Xenia, with Pastor Steve Schellin officiating. Friends may call Saturday, Oct. 8, from 10:30 a.m. until the time of service at the funeral home. Online condolences may be made to the family at http://www.mccolaughfuneralhome.com.