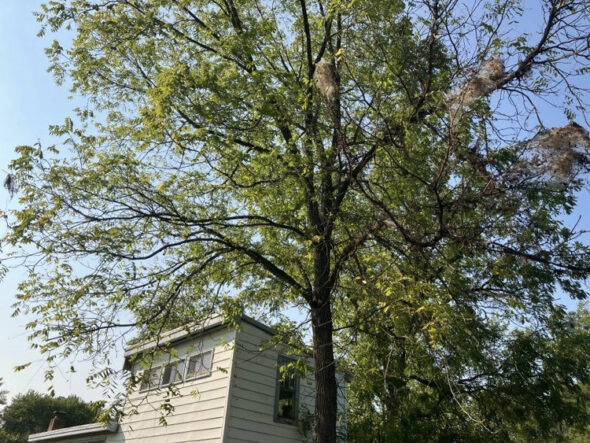 Two sizeable black walnut trees stand above the writer's home in the norther reaches of Yellow Springs. The annual fruit that those trees produce — little green walnuts — assail the writer's tin roof for the duration of September and October. (Photo by Reilly Dixon)

Tin Can Economy | An ode to the walnut trees

It may seem strange that after over a year and a half, I should suddenly revive this column to ruminate on a nut.

The central purpose of this occasional column was — and perhaps still is — to reflect on the categories of object, form and scale, and to consider the places and spaces we inhabit, their constituent materials and our relationship to it all.

I felt compelled to think again in these terms at the behest of another fading season, with the leaves beginning to yellow, my crop weak on the vine and our halcyon days spent together growing shorter. The hemisphere has plainly announced an ending of things. The unrelenting heat is finally breaking, despite us having only recently accepted our unending sweat-drenched fates.

Our late-summer lives and routines are changing and we must comply.

But you know, if it wasn’t for the daily onslaught of walnuts crashing down on my tin roof, I’d almost feel at ease at this point in the year.

Hanging over my home stand two impressive black walnut trees. One has to be approximating 60 feet tall and the other is probably closer to 40. My little chicken-coop-of-a-house, comfortably nestled in a strange field in the northern reaches of the village, lies smack below these two trees.

More often than not, this small corner of the village is an idyllic one. Most days, I’m awoken by the blue jays sounding like rusty swing sets just outside our window — songs I treasure above most.

On good, clear summer days, I hear katydids and finches; I hear cicadas, cardinals and crickets. Birdsong and bug noise coalesce into a daily orchestra that reminds me that I am of a place, of a certain time.

But in Septembers and Octobers, I hear walnuts falling on my slanted tin roof.

The first salvo always begins earlier than I’d like, right around the first suggestions of dawn.

Neighboring squirrels start their day with a rowdy morning mambo and salsa routine around the branches, which sends the nuts cascading down in heavy torrents.

The spherical artillery has to then make a big scene of rolling down, falling past the gutter — a second-long reprieve — and then, a muted thump in the grass.

I know it comes with the territory. A lot of compromises need to be made to live in any place — especially Yellow Springs. It is, after all, only two months out of the year that this aggressive assault takes place. If I were a less motivated writer, the whole ordeal would be finished before the end of this paragraph. The trees would be bare, I’d get a full night’s rest and all would be well with the world.

But for now, this is where I am and these are the sounds that have etched their way into the sonic scapes that compose a life I’ve chosen to live.

Here’s what I’m really getting at: Walnuts make wieldy metaphors. Imagine Prince Hamlet preparing for his fourth soliloquy, but rather than Yorick’s skull, I’m out in the field holding onto one of those raucous little nuts. I can’t be angry at them. The trees were here before me. I’ve chosen to reside beneath them. And barring any unfortunate flash of lightning, they’ll be here long after I’ve packed up my bags.

Across the street, at the Union School House property, several large walnut trees were felled last week. I wonder what those nuts were saying. It couldn’t have been too important, right? In California, gargantuan sequoias turn into smoking matchsticks. Scientists are saying 30% of the world’s 58,000 tree species are at threat of extinction.

How can I be angry?

Back home, the day begins. I’m awoken by the opening bombardment, and the hail of nuts begins to pattern my first thoughts. They’re sporadic and sometimes intrusive. I wonder where those nuts think they’re going. Where am I going? What’ll I do today? Will I be better? How many webworm tents did the nuts eviscerate on their way down?

Squirrels scamper down the bark and onto the ground still dewy from a dawn that hasn’t broken.

They make off with their shattered prize, though they may have some work left. Maybe a couple more smacks against my sidewalk and the coveted center is theirs. Nutty fragments disperse across the concrete and lawn.

Likewise, my interrupted dreams disintegrate and begin their decomposition. I pull back the sheets and try to remember who it was I wanted to be by now. What was it I was supposed to do?

I read somewhere that squirrels forget over half the nuts they’ve buried. I’m not sure I believe this — it sounds more like a playground myth — but it’s a prospect that really tickles me. I thought we were supposed to be the forgetful ones. With any luck and the right conditions, that lapse in memory gives birth to another tree. How might my forgetfulness yield dividends?

As it gets lighter outside, these sounds become a language unto themselves. Onomatopoeias start to fail me. The cadences of the walnuts’ violence turn percussive in the symphony of a sunrise. Winged sopranos chime in from a nearby branch. The new day asserts itself in a clamorous cipher that I think I’m beginning to understand.

I’m once again reminded that the natural world — especially my little slice of it — is not passive.

Little quotidian dramas are staged at every scale, on every branch and under every roof. The nuts, the birds, the worms, the fallen leaves, the whole lot of it, all have their priorities and prerogatives. We all have places to be, things to do, things to bury or uncover. Time’s ticking. The season’s ending, the days are quicker and we’re getting older.

I should get out of bed. I can barely hear myself think. I rub the grime out of my eyes and fall into the industry of the day.