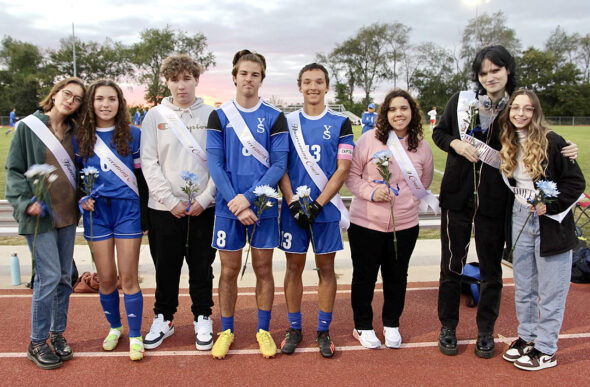 The Yellow Springs High School and McKinney Middle School cross country teams earned a ton of individual awards at the Ambassador Classic this past Saturday, Oct. 8, on the campus of Legacy Christian. This course was the toughest course of the season, with creek crossings, rolling hills and sharp turns. Of the 29 Bulldog runners who participated on Saturday, 19 earned either a medal or ribbon for their performance.

Senior Cheyan Sundell-Turner was once again the top Bulldog performer as she ran to a runner-up finish in a time of 20:59. She was supported by ribbon recipients Sasi Drees-Johnson (23rd), Josie DeWine (24th) and Rebecca DeWine (42nd). Freshman twins Hannah Finney (63rd) and Lauren Finney (67th) rounded out the stellar performance of the girls team, which finished fourth as a team in a field of 16 schools.

The YSHS boys had eight runners at the starting line and ran to an 11th-place finish out of 16 teams in a field of 110 runners. Ninth-grader Kyle Johnston (23rd) and junior Jack Horvath (41st) earned ribbons with their solid efforts. The boys squad showed their depth with Kyle Raymer, Kael Cooney, Evan Galarza, Zach Butler, Arthur Devore and Collin Calfee rounding out the field.

Coach Isabelle Dierauer commented that, despite cold conditions and running on a tough course against stellar competition, the Bulldog runners once again showed their true grit and determination.

Two of the biggest meets of the season will lead to its near conclusion. The Bulldogs will run at the Metro Buckeye Conference meet on Friday, Oct. 14, beginning at 4:30 p.m. at the Cedarville University cross-country course. On Tuesday, Oct. 18, the largest McKinney Middle School and YS High School athletic event of the year will take place at the Young’s Jersey Cross Country invitational. The middle and high schools will welcome approximately 1,000 runners. The event will begin promptly at 4:15 p.m.
—John Gudgel, coach

The varsity Bulldogs continued their season with two wins and a loss over the last week, securing victories over Middletown Christian on Tuesday, Oct. 4, and Emmanuel Christian on Monday, Oct. 10; and a defeat at the hands of Dominion Academy on Saturday, Oct. 8.

The girls dominated Middletown 3–1 at home, with sophomore Lacy Longshaw leading the way for kills with 24, followed closely by sophomore Adeline Zinger, who brought in 16. Zinger was the leader for digs with a whopping 37, followed by junior Violet Babb with 25.

That game coincided with Senior Night, when senior players Vivian Bryan and Josephine Zinger were honored.

The loss against Dominion at home marked a valiant effort for the Bulldogs, who were defeated 2–3 in a close match that saw the team narrowly trailing their competitors in two of the three sets in which they were bested. Longshaw and Zinger again led for kills with 23 and 12, respectively, and Babb and Zinger brought in 37 and 25 digs each.

Stats for the Oct. 10 win over Emmanuel were not available at press time.

The three matches bring the team’s conference record to 7–1, with an overall season record of 14–6.

The Bulldogs played Jefferson away on Tuesday, Oct. 11; that match will be reported in next week’s Round-up. The team will face off against Bethel away for its final match of the season on Saturday, Oct. 15, beginning at 11 a.m.

The Varsity Bulldogs have racked up one win and two losses last week, with a victory over Ponitz on Monday, Oct. 3; and falling to Dayton Christian on Thursday, Oct. 6; and Newton on Saturday, Oct. 8.

Full stats for the matches were not available at press time, but the Oct. 8 loss against Newton saw an impressive nine saves from Goalkeeper junior Lily Kibblewhite. That night was also Senior Night, at which seniors Autumn Sorenson and Halee Sparks were honored.

The varsity Bulldogs continue to reign supreme, with two more wins under their cleats against Dayton Christian on Thursday, Oct. 6; and Newton on Saturday, Oct. 8.

Senior Eli Eyrich brought in the only goal of the match against Dayton Christian; senior goalkeeper Krishan Miller shut down eight goal attempts from the opposition to keep them scoreless at 1–0.

The team achieved a triumph of 11–0 over Newton, with a whopping five goals from senior Dylon Mapes, three from Eyrich, and one each from seniors Ben Espinosa, Jason Knemeyer and Liam McClean. Miller racked up two saves to again keep the opposition scoreless.

The team’s conference record currently stands at 3–1–0, with a season record of 13–1–0.
Results of a Tuesday, Oct. 11, match against Cincinnati Country Day will be reported in next week’s Round-up. The final two matches of the season will be held Thursday, Oct. 13, 7 p.m., at Wayne; and Saturday, Oct. 15, noon, at Hamilton Badin.