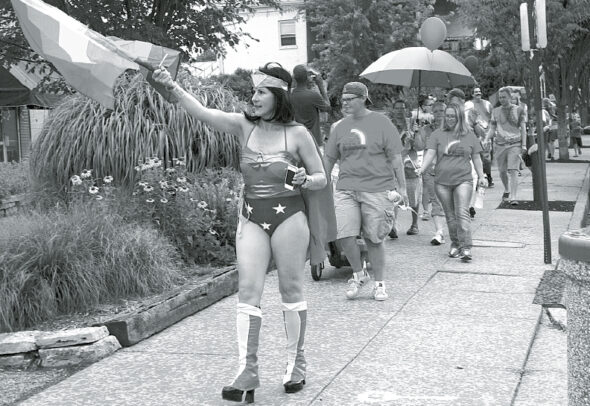 As published in the July 5, 2012, issue of the News: “Over 80 people showed up to kick off Yellow Springs’ first Pride weekend, with a march led by Melissa Heston as Wonder Woman.” (News archive photo by Lauren Heaton)

The bicycle rage continues. “Approach pedestrians with the wheel under control. Be prepared to dismount if the foot passenger shows confusion. This applies especially to sidewalk riding.”

Dating? “Ma Sweet will be delighted to have the young men of Yellow Springs meet her brilliant daughters, Tuesday evening.”

School enrollment. “‘We’re bursting at the seams,’ said Superintendent John Rinehart, Monday afternoon after a check of Monday’s enrollment figures for the regular twelve grades of the public schools showed that 394 had attended Monday’s opening session.”

Post war. “Half the boys of the Bryan High School graduating class enlisted in the United States Army last week.”

Why not a swimming pool in town? “A swimming pool could be built in Yellow Springs, and not only pay for its maintenance, but retire its own cost of construction over a moderate period of years. … Cedarville is building a pool. Why can’t we?” [from editorial by then YS News Editor Ernest Morgan]

Moonlight picnic. “A moonlight picnic, to which the public is cordially invited, is being staged on the lawn of Central Chapel A.M.E. Church Saturday night. The church’s Sunday School is sponsor of the event.”

Dogs run free. “Chief McKee yesterday told Mills Lawn children whose canine pets followed them to school to prevent this in the future. He asked school authorities to call pet owners when identifiable dogs show up for school in the future, but promises prosecution for the owners of persistent canine attenders.”

Pygmy goats. “Corinne Odiorne [Pelzl]’s experiment in the breeding of a pygmy goat milking strain received a severe setback Friday night when a dog broke into the fenced-in herd at the Odiorne residence, killed one goat and injured five others.”

Glass Farm. “The Affordable Housing Task Force in its report recommended a development of 31 units of mixed-income housing on the eastern 20 Acres of the Glass Farm [on King Street].”

Ultimate Frisbee. “Pickup games of Ultimate Frisbee will be held each Thursday, 7 p.m., between Antioch College’s Main Building and Corry Street. … Ultimate Frisbee is a ‘cross between soccer and football — sort of,’ according to organizer Daniel Katz-Stein.”

Water utility bills. “Water rates will increase in October and continue to rise over the next four years, until they are double or more what they are today, as a result of an ordinance passed unanimously by Village Council at its meeting Monday.”

Yellow Springs Brewery. “The craft beer revolution is coming to Yellow Springs, say the owners of a new microbrewery here whose aim is not to transform local hearts and minds, but palates, one batch of handcrafted beer at a time.”

Little Art Theatre. “The Little Art Theatre board is well on its way to raising close to a half million dollars for a digital projector and a complete theater renovation — the first in the theater’s 83-year history.”