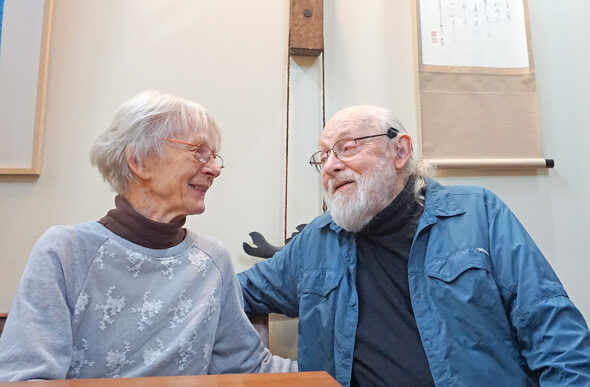 Villager and Antioch College Emeritus Professor of Japanese Language, Literature and Culture Harold Wright, right, authored “Bridge on the Shikishima Way: 100 Poems by Emperor Meiji,” which was published this year by Chuo Koron Shinsha. The book contains Wright’s translations of 100 waka poems by Japan’s Emperor Meiji, released near the 110th anniversary of the emperor’s death. Jonatha Wright, left, has lent her poetic eye and ear to her husband in creating the book, which was 30 years in the making. (Photo by Lauren "Chuck" Shows)

No lines exist
which sector off the sky,
so high above,
though the nations of this earth
are all bound by borders.

These words were written by Japan’s Emperor Meiji in 1906, six years before his death. The emperor was a prolific composer of tanka or waka, a classical form of Japanese poetry consisting of 31 syllables. The emperor is said to have written 100,000 such poems in his lifetime, meditating on such themes as war, peace and tradition; making entreaties to the gods; and reveling in the beauty of nature.

Now, 100 of those poems are available to English-language readers: This year, villager and Antioch College Emeritus Professor of Japanese Language, Literature and Culture Harold Wright released “Bridge on the Shikishima Way: 100 Poems by Emperor Meiji.” The book presents the poems in both Japanese and in English, translated by Wright.

“Bridge on the Shikishima Way” includes an extensive foreword by Wright on the cultural and historical importance of Emperor Meiji’s poetry. In speaking to the News in a recent interview, Wright summarized that importance in a few words.

“His poetry is the only way we know the heart of the emperor,” Wright said.

In some ways, poetry is the way we know the heart of Wright as well. A Dayton native born in 1931, Wright made his way to Japan in 1952 while enlisted in the U.S. Navy. During his three years stationed there, Wright came to love Japanese poetry as experienced through translations and soon began writing his own English-language poetry, mimicking the translated styles he’d encountered.

“[I] decided early that someday I too would live in Japan and translate old stories and poems,” he wrote in the foreword to “Bridge on the Shikishima Way.” “But first, I had to learn to read that puzzling language.”

After leaving the Navy, Wright studied Japanese language and culture at the University of Hawaii, then literature and translation methods at Columbia University. In 1962, he was awarded a Fulbright scholarship to study in Japan’s Keio University literature department. At the time, the focus of his studies was Hagiwara Sakutaro, who is considered to be the “father of modern colloquial poetry in Japan.” Two years into that course of study, Wright received a call that would go on to quietly chart a course for the rest of his life.

As he wrote in “Bridge on the Shikishima Way”: “On the phone the man told me his name was Takasawa and he was calling from Meiji Jingu Shinto Shrine [built in 1920 in honor of Emperor Meiji and his wife, Empress Shoken].”

Iakasawa Shinichiro, the shrine’s chief priest, explained that that year’s Tokyo Olympics would be held partially on the grounds of the shrine. He asked Wright to translate into English a few poems by the emperor and empress to distribute to international guests.

At first, Wright said he was taken aback by the request — could he undertake what was sure to be the daunting task of translating the works of such revered writers and historical figures?

“I did not know at the time the extent of the gift of life-long changes being bestowed upon me, a young confused student-poet from the United States,” he wrote. “I gratefully accepted the challenge and my life has never been the same.”

It was an “awesome responsibility” — one that Wright took seriously. The challenge in translating poetry, he said, is not only correctly communicating its language, but also expressing its nuances, sounds and rhythms. The task involved delving deeply into the history of Japan as the emperor and empress would have known it and many visits to Meiji Jingu.

Wright was invited back to Meiji Jingu in 1982 to translate two books of poetry by the emperor and empress, which would be presented to embassies in Tokyo. It was at that time that chief priest Takasawa gave him two more manuscripts to translate: 311 poems by Emperor Meiji and 111 by Empress Shoken. Around the same time, Wright was — after a lot of prayer and purification — invited to enter the part of the shrine where, according to the tradition of Shinto religion, the kami, or spirit, of the emperor remains. This honor, Wright said, is typically only reserved for Shinto priests.

He told the News: “[Takasawa] asked me, ‘Meijiten’no ni aitai desu ka?’ Did I hear that right? Did he ask, ‘Would you like to meet Emperor Meiji?’ I knew he died in 1912. But that’s exactly what he’d said. … So I said, ‘Dekireba — if it’s possible.’ I thought that was a pretty good answer.”

Upon entering the shrine, Wright was introduced to the emperor’s kami as “a translator of your poetry” — an “awesome experience” that solidified the great honor of taking into his care Emperor Meiji’s 311 poems. Those poems would go on to form the nucleus of “Bridge on the Shikishima Way” — though it would be more than three decades before the collection would appear.

A life of poems and stories

At the end of a wooded lane, in the Yellow Springs home he shares with his wife, Jonatha Wright, Harold Wright told the News that, though “Bridge on the Shikishima Way” took about 30 years to complete, it wasn’t 30 years of constant work.

“It’s not the only thing I did in those years!” he said. “I would forget about it for a while — or maybe I’d get stuck on a word or something.”

Jonatha Wright added: “One poem might stretch over some time, but not with constant work.”

In fact, those years were full for the Wrights: The couple met in the 1980s while enrolled in the Antioch Writers’ Workshop. Both, they said, were looking to shore up their poetry writing skills, and “found each other” due to their shared love of the craft. For a while before they married, the two kept in touch long-distance, with Harold Wright in Yellow Springs, where he’d been teaching at Antioch College since 1973, and Jonatha Wright in northern Ohio. Not unlike the emperor and empress when one would travel on Imperial business, the Wrights would send poetry to one another while they were parted.

“She’s always had a very good ear for poetry,” Harold Wright said, and added that he’s long “depended” on that ear when he’s in the final stages of translating one of the poems of the emperor or empress.

“When working out the metrical schema, sometimes she’ll say, ‘Maybe a shorter word there, or maybe you started alliteration here,’” Harold Wright said.

Jonatha Wright added: “But he always comes up with a better word than the three or four I might suggest.”

Harold Wright smiled and waved a hand at his wife.

“She’s just being modest,” he said.

During Harold Wright’s tenure at Antioch College, which ended in 2005, the couple led trips to Kyoto, Japan, as part of the college’s Education Abroad program for over a decade. The Wrights and the students would spend a few months in Japan, and while the students studied or took part in programs, the couple would often take the opportunity to immerse themselves in a new neighborhood in Kyoto every evening. The two gathered stories from local history or from people they met along the way — and, of course, lived their own stories.

This would prove useful as the two found another shared passion: storytelling. After visiting the National Storytelling Festival in Jonesborough, Tennessee, one year, the Wrights decided to try their hand at the practice.

“Both of us had always had families that told stories — that’s just the way our families talked,” Jonatha Wright said. “We realized it was something we’d already been doing, so we could tweak it here and there and make a performance out of it — and we loved it.”

The Wrights spent years as part of the Miami Valley Storytellers and the Yellow Springs Talespinners, traveling around the country to tell stories and performing locally at Young’s Dairy and events like Antioch’s “Ohayo Ohio” Japanese culture symposium. The two incorporated some Japanese folktales into their repertoire, as well as weaving pieces of their own personal histories into their craft.

During these years, Harold Wright was still working on translating the poems of the emperor and empress that had been entrusted to him by the Meiji Jingu shrine. Readers of the Yellow Springs News were, for many years, among those who were able to taste the fruits of his ongoing labor, as he composed op-ed pieces accompanied by tanka, often those of the emperor and empress, which were published in the News.

In 2017, Harold Wright wrote to Meiji Jingu shrine and told them he had completed the request made of him by Takasawa all those years ago: All 311 of the poems of Emperor Meiji entrusted to him in 1982 had been translated; those of the empress would soon follow. Though Takasawa had died in the intervening years, the shrine received the poems warmly and invited the couple to visit Tokyo to finalize the translations, which would later materialize into “Bridge on the Shikishima Way,” with the shrine’s editorial oversight.

Harold Wright said that trip to Japan will most likely be his last; now 91, he has neuropathy in his feet which makes it difficult to walk. But his travels through the world of Japanese poetry, he said, are not finished: When this reporter asked if he’s considered compiling a similar book of Empress Shoken’s translated poetry to accompany Emperor Meiji’s, he said he’s working on it now.

“The empress was a marvelous poet — I am picking my 100 favorites of them,” he said. “And since you asked, it gives me the opportunity to write to these publishers and say, ‘I’m being asked when the poems are coming out!’”

This year marks the 110th anniversary of Emperor Meiji’s death. With that in mind, how might he feel about some of his works being translated by an American and made available to readers of another language all these years hence?

“I think he’d be delighted, to make it short,” Harold Wright said. “​​He was open to blending Western ideas with Japanese traditions.”

Emperor Meiji’s reign is historically associated with Japan’s transformation from a feudal nation closed to Westerners into a global superpower in trade. That change was controversial and precipitated in part by pressure and the threat of force from the U.S. military during the reign of his father, Emperor Komei, who was opposed to Western influence.

Nevertheless, Emperor Meiji’s views on the opening of Japan to outsiders are perhaps best illustrated in his own words, translated by Harold Wright:

By crossing oceans
from distant foreign lands
our guests have arrived.
Oh, to have them see the views
of our mountains and waters.