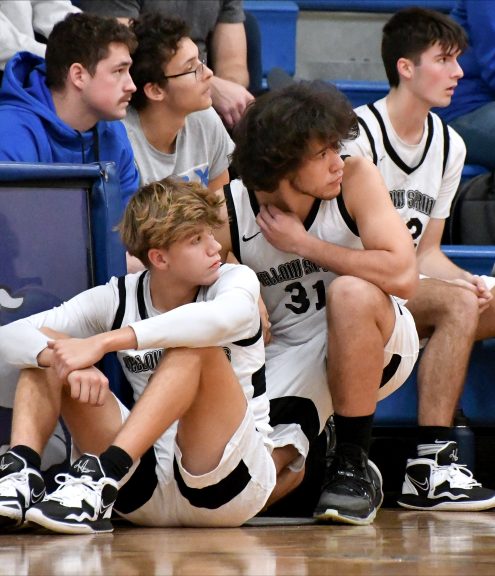 Boys rack up another win

The Yellow Springs High School boys varsity basketball team added another win to its season on Friday, Jan. 6. The team faced off against the Miami Valley School, earning a 40–29 victory against their opponents.

Individual stats for the winning game were not available at press time. Also unavailable were the results of games against East Dayton Christian on Monday, Jan. 9, and against Jefferson High School on Tuesday, Jan. 10; the results will be reported in next week’s issue of the News.

The win against Miami Valley School brings the team’s season record to 4–7 and the Metro Buckeye Conference record to 1–4.

The team’s next game will be against Dayton Christian at home on Friday, Jan. 13, beginning at 7 p.m. The Bulldogs will compete in the second annual MLK Classic at Fort Loramie on Sunday, Jan. 15, facing off against Fort Loramie at 4:30 p.m.; tickets are $15 at the door.

Individual stats for the game were not available at press time. The team’s current season record is 0–4, with a conference record of 0–3.

The next game will be played at home on Thursday, Jan. 12, beginning at 7 p.m., against Dayton Christian.

Girls season begins with a loss

The Yellow Springs High School girls bowling team competed in its first match on Monday, Jan. 9, facing off against Middletown Christian. The four-member Bulldogs fell to the five-member Eagles, 921 pins to 1,257.

The team played two regular games in the match, with sophomore Ayla Arnold leading with 205 pins across both games; sophomore Clara Gomez followed closely, with 204 pins.

The girls will next face Dayton Christian on Tuesday, Jan. 17, beginning at 4 p.m. at Beaver-Vu Bowl.

Boys net a win and a loss

The Yellow Springs High School boys bowling team racked up another win and a loss in their most recent two games.

The five-member Bulldogs defeated the six-member Middletown Christian Eagles 1,943 pins to 1,722 on Friday, Jan. 6 in two regular games and one Baker game. Senior Lucas Tumblison led the Bulldogs in pins with 370 across the regular games, followed by senior Krishan Miller, who knocked down 349 pins.

The five Bulldogs narrowly missed a win against six-member team Middletown Christian on Monday, Jan. 9, falling 1,674 pins to their opponents’ 1,703 in two regular games and a Baker game. Sophomore Zander Baisden was the scoring leader for the match, netting 371 pins across the two games. He was followed in scoring by sophomore Stephon Royalston with 342 pins.

The boys will next face Dayton Christian on Tuesday, Jan. 17, beginning at 4 p.m. at Beaver-Vu Bowl.