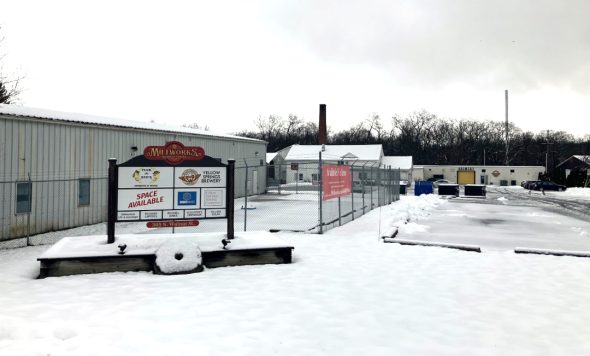 In recent weeks, several area businesses have moved into the Millworks business park, bringing the total number of current tenants to 12. (Photo by Reilly Dixon)

When EnviroFlight left Yellow Springs for newer facilities in Kentucky and North Carolina last September, the sustainable agriculture company left a significant hole in the village.

Since it opened at Millworks 14 years ago, EnviroFlight provided the area with nearly 30 jobs — many of which were held by village residents — and generated hundreds of thousands of dollars in utility payments and income taxes.

Once the company departed, all that was gone, and Allison Moody of APR Investments, LLC — the company that has owned Millworks since 2021 — was left with a sizable vacancy: 25,000 square feet to be exact.

But in recent months, several area businesses have moved into the industrial park, solving at least some portion of Moody’s tenant woes.

Moody told the News this week that she’s keen to provide a space for local industrial tenants — companies, she said, who may not need to be public-facing to succeed.

“I’m aware of how important it is to keep smaller retailers close to the center of town, in the downtown business district,” she said. “We don’t have the buildings for little trinket stores.”

As a testament to provide area doers and makers with space, Moody recently received approval from the Village Planning Commission to rezone her four-acre business park to a PUD, or planned unit development. According to her, the park’s previous owners, Jessica Yamamoto and Antonio Molina, had started the process to rezone Millworks to a PUD before they sold the property in 2018, but they never realized that plan.

Under this new zoning status, Moody said she can accommodate a more diverse array of businesses that may be interested in leasing from her. Although she’s still seeking several tenants to occupy many of EnviroFlight’s warehouses, her options have multiplied.

Regarding the warehouses: “There’s been talk of a children’s science museum, a doggy daycare — which I think would be successful — and other options. We could even have a new restaurant, just no drive through. I’d love to see a big barbecue restaurant with outdoor seating here,” Moody said.

In addition to looking for more Millworks tenants, Moody is working as a commercial realtor for Coldwell Banker as the leasing agent to find a new occupant for a warehouse and office space at 888 Dayton Street, on behalf of the building’s owner, the Miami Valley Educational Computer Association, or MVECA.

Moody said she hopes the eventual tenant of that space is a large-scale employer.

“With 30,000 square feet and huge racks, it’s prime for a large distribution center,” she said. “I want a big, big company — possibly a regional location for an Amazon or FedEx distribution location.”

It’s meaningful to the staff of YS Home, Inc., that the organization should enter their 25th year by moving into a new space.

According to Executive Director Emily Seibel, the affordable housing nonprofit started in a board member’s garage, and when the group’s previous location on the second floor of the United Methodist Church opened up, it was a big deal. But eventually, Home, Inc. started to outgrow that location.

“We were ready to move into a more visible, accessible space to better engage the community,” Seibel said.

As of Jan. 1, the group now occupies the office building that previously housed the EnviroFlight offices. The new space’s main benefit for Home, Inc., Seibel said, is its significantly greater accessibility than the Methodist church location, which had steep stairs.

“The former office space posed a barrier to clients with physical disabilities who could not use stairs,” Seibel said. “This space is fully wheelchair accessible, and we’ve watched as Allison has invested in safety and accessibility upgrades across the park including paving the formerly gravel drive and parking areas.”

Moody said that out of a personal admiration for the group’s mission, a third of Home, Inc.’s new space was donated in perpetuity.

“It’s important for us to support them,” Moody said. “They’re a vital part of the community.”

Elsewhere at Millworks is now Fox Trot Services, the landscaping company owned by the native Yellow Springs father-son duo, Kelley and Tyler Fox. Like YS Home, Inc., Fox Trot began its lease at the start of 2023, and true to Moody’s plan to host industry-based companies, Fox Trot plans to use its space at Millworks to store equipment and machinery.

“We opted to move into Millworks because we wanted to keep our business in town,” Tyler Fox told the News. “[We appreciate] the family-like atmosphere of the business park and the diversity of businesses there.”

Fox Trot was started in 2016 by Kelley Fox and has since provided landscaping services such as lawn care and snow removal, as well as demolition and other more industrial services.

Moody said the Foxes will also help with the business park’s landscaping needs.

Lastly, there’s Studio Uncommon, a new tattoo parlor that will occupy the space adjacent to the Yellow Springs Baking Company and the Home, Inc. office.

Owned by married tattoo artists Lexi F. Kip and Lexi L. Kip — who share both a first and last name — Studio Uncommon is set to open its doors for clients sometime in late March. According to Lexi F. Kip, the pair specializes in “single needle tattooing,” a style that creates crisp, clean lines that often lends itself to minimalist designs.

“Yellow Springs was always our end goal,” Kip said. “It’s been the place that has felt like home since the moment [Lexi L.] and I went on our first date here. We landed on Millworks specifically after seeing the space and meeting Allison — both radiated the culture of Yellow Springs.”

Kip said she and her wife will spend the coming months renovating the future shop. With an updated paint job, new flooring and added fixtures, they aim to “modernize” the space to make their eventual clients feel more at home.

When Studio Uncommon does open up, its hours of operation will be Tuesday–Friday, 10 a.m.–2 p.m. The couple plans to take in an average of 128 clients per month, all by reservation only.

The News plans to catch up with the Kips when Studio Uncommon opens in March.