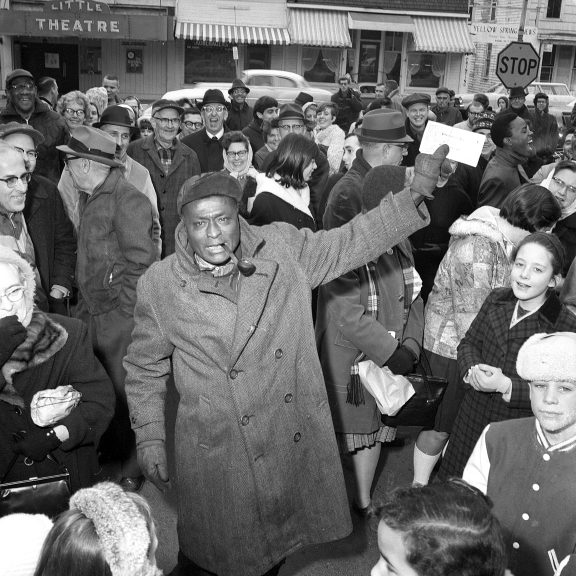 From the Jan. 12, 1966 issue of the News: “Leo Hamilton, one of eight winners of $25 each at last Saturday’s Appreciation Day drawing, displays his winnings, while others nearby are happy for him.” Appreciation Days were a giveaway program sponsored by Yellow Springs merchants. At the January 1966 Appreciation Day, merchants gave away $200 between the eight lucky villagers. (YS News archive photo)

Myth of equality of economic opportunity exposed by statistics. “The 10% of American families who receive $4,850 or more in income annually receive almost one-third of the total national income and hold 39% of the total national savings, according to statistics prepared for the Federal Reserve Board by the Survey Research Center of the University of Michigan.”

Editorial: Let’s plan now to meet our municipal needs. “The furor over the really bad sanitary situation, which came into being recently as the result of the break-down of equipment at the sewage pumping station, is only a sample of the municipal headaches which confront this village.” —Keith A. Howard, Editor.

Champney removed from Base. “Dragged from Wright-Patterson Air Force Base Tuesday of last week by military police, peace vigiler Horace Champney had entered the restricted area in an attempt to discuss war issues with personnel.”

Strikers raid college offices. “A strike shortly after noon Monday took all Antioch College food, housekeeping and maintenance workers off the job. About 95 members of Local 767, United Electrical Radio and Machine Workers of America, are involved, local president Manuel Durbin told the News. In addition about 200 workers of the Antioch part-time workers union walked off the job.”

Need mags, books, gerbils. “The library has one further, rather unusual request. The library’s male gerbil recently lost its mate. Anyone interested in donating a female or a mated pair is asked to call Mrs. Simcich at the High School.”

Price of News to go to 20¢. “It is with an apology and a plea for the community’s continued support that the News today announces an increase in price of the News to take effect March 1. Single copies of the News go up to 20¢ then.”

The McKinney School— In search of an identity. “The seventh and eighth grades have lost their identity as middle school students since leaving the Morgan Building, and the McKinney School staff believes it’s time to remedy that, said the school’s team leader, teacher Pam Conine.”

Village to seek funds for skate park. “[Yellow Springs High School students] Ben Stratton and Andy Partee like to grind and get air, and they’d like to see a place in Yellow Springs where they can do that safely, without bothering other people.”

Editorial: It was all just blah, blah, blah. “Council’s goal setting session Saturday was a dispiriting lesson in the meaning of the phrase empty rhetoric. After all their earnest blather about the need to focus on affordable living in Yellow Springs instead of just affordable housing, opponents on Council of the Glass Farm project did not even support the proposed goal of promoting affordable living in town.” —Amy Harper, Editor

Downtown plan in progress. “Short Street should remain a public street and not be converted to a pedestrian mall. That is one of the “suggestions” made by Village Planning Commission following several discussions last year about a comprehensive plan to upgrade the Central Business District.”

Council to police: ticket sidewalk law violators. “Local resident Paul DeLaVergne delivered his last “lecture” to Village Council at its meeting Monday. The subject was one he had lectured on before: the need to enforce the law prohibiting people from skating or riding bicycles and skateboards on the downtown sidewalks.”

Village pulls through for Little Art. “The local community helped the Little Art Theatre to reach its fundraising goal of $475,000 to complete a total renovation of the facility. Little Art Director Jenny Cowperthwaite and capital campaign co-chair Dorothy Scott spelled out the good news on the marquee.”

Over and out. “The Hyde Road bridge that has taken travelers over the railroad and now bike path since sometime in the mid-19th century was torn down last week by the Greene County engineers and crew.”

Reviewing safety in our schools. “Guns and the Village; this is the third in a series of articles examining guns in our local and national cultures. In the days and weeks following the school shooting in Newtown, Conn., several local parents found themselves having conversations with their children about what to do in the case of a shooting at their own school in Yellow Springs.”