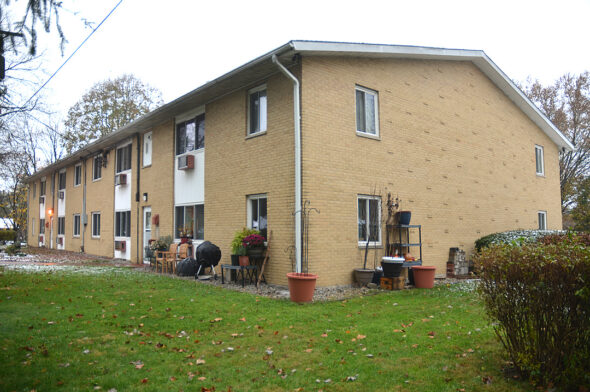 Early last year, the Village of Yellow Springs closed on a deal to purchase the apartment building at 10 Lawson Place. Final sale for the 16-unit apartment was $770,000. Village Manager Josué Salmerón has been acting property manager for the apartments since then. (Photo by Matt Minde)

At the last Council meeting of 2022, Council members heard from several Lawson Place residents voicing their concern for two long-term residents whose lease had been terminated by Village Manager Josué Salmerón, who is acting as property manager for the apartments.

Charles Garen and Denise Struckman, who have lived in the Lawson Place apartments for over 10 years, received notice on Nov. 2 by certified mail that their lease was being terminated, and they were to vacate the premises by Dec. 31, 2022.

According to Salmerón, the decision to terminate Garen and Struckman’s lease came after a number of noise complaints from tenants in neighboring apartments.

“We are going about this process in the most sensitive way possible,” Salmerón said at the Dec. 19 Council meeting. “We have to provide for all of the tenants.”

Salmerón said attempts at mediation were declined by Garen and Struckman. In a follow-up interview, Salmerón said a caseworker for the pair asked for a three-month extension past the Dec. 31 date to vacate the premises. Salmerón rejected the request, so the caseworker decided not to go through mediation.

Friends of Struckman and Garen attempted to advocate to Council members  on their behalf. Villager Teresa Gill said she hoped that getting Council’s attention would help Garen and Struckman, or at least make the wider public aware of the state of Lawson Place.

“Charles and Denise are elderly, disabled, and living off of a Section-8 voucher,” Gill said. “I can’t imagine the heartache of having to leave a place you’ve lived for 10-plus years. I’m asking the Village to reconsider its approach.”

Struckman and Garen, both of whom have special needs and receive rental assistance through Greene Metropolitan Housing, said they were “not sure” of their future or ability to secure housing after they left the Village-owned Lawson Place apartments.

“I don’t know what’s going to happen from one minute to the next,” Struckman said.

In an interview following the Council meeting, Salmerón discussed the process of terminating Garen and Struckman’s lease, which was on a month-to-month basis after the Village purchased the property. Garen and Struckman were given 60 days notice, 30 days longer than the 30 days required by law.

“No one is facing eviction; it’s a lease non-renewal,” Salmerón said. “The alternative was seeking an eviction for the ongoing behavior they chose not to correct.”

According to information obtained through a public records request, Salmerón and Erica Thomas, administrative assistant to the village manager, had received several complaints between Aug. 18 and Dec. 14 about noise and smells emanating from Garen and Struckman’s apartment. While the name of the complainant was redacted from the records, all of the written complaints come from a single neighbor.

While noise was the main complaint against the couple, the neighbor also took issue with Struckman’s smoking habit. According to a written warning issued to Struckman by the Village in July, Lawson place tenants are to smoke at least 25 feet from the building or common areas. Tenants received two additional written notices, dated Sept 6 and Dec. 15.

Gill, speaking with the News on behalf of Struckman, said that Struckman was confused about enforcement of the smoking policy for the apartments.

“They posted signs and sent one warning,” Gill said. “She needed a little more than that, given her [disability].”

Jackson said that Garen and Struckman, having been in a long-term lease and not having any major complaints levied against them prior to the change in property management, said TCN has decided to pay for a hotel room until they can get on the waiting list for a new apartment.

“We don’t do this for everybody,” Jackson said, explaining the factors that went into determining TCN’s decision. “We are doing this to make sure they aren’t homeless.”

According to Jackson, Garen and Struckman cannot be placed on the list of people with housing vouchers seeking housing until their lease termination date has passed; because the date to vacate the premises was set for Dec. 31, the earliest Garen and Struckman could begin their housing search was Jan. 3, since many government offices were closed on Jan. 2 in observance of the New Year’s Day holiday.

In a follow-up interview, Angela Shockley, the Section-8 supervisor from Greene Metropolitan Housing, said people in Garen and Struckman’s position must act quickly to secure housing through the voucher program. If Greene Metropolitan knows about the notice to vacate, tenants are given a unit transfer, which allows them to seek housing immediately without applying for new funding and being placed on the waitlist.

“The tenant would have had to involve us immediately,” Shockley said. “If they move out before getting our voucher, they would have to get on our waitlist because they wouldn’t be considered a unit transfer.”

Despite having a voucher, tenants seeking rentals must find housing on their own, or with the help of a caseworker from an outside institution. Shockley said the time it takes to get people housed is dependent on how dedicated they are to the search.

“Each voucher is good for 120 days,” Shockley said. “We have lists of properties [that accept vouchers] which are updated daily, but we do have a lot of clients searching for housing.”

Struckman said her best case scenario would be finding another rental in Yellow Springs, where she has a support system.

“I’d like to be able to move to the other apartments in that area,” she said.

Gill said she also hopes Garen and Struckman could move back to Yellow Springs and that the Village, along with other landlords, would be more careful when terminating leases for elderly, disabled tenants.

“There’s going by the book and there’s doing what’s right,” Gill said. “I hope [the Village] will give people more grace in the future.”