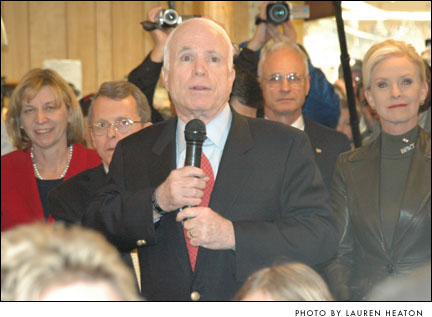 Milkshake for McCain at Young’s

Presidential hopeful John McCain stopped in at Young’s Jersey Dairy just after noon on Wednesday, Feb. 20, long enough to order an eggnog bull shake and make a 15-minute stump speech on the highlights of his Ohio campaign. Half of the estimated 550 to 600 area residents who came to catch a glimpse of the Republican candidate were lucky enough to get a spot inside. The other half lined up outside the restaurant in the icy weather, snapping cell phone cameras and buying McCain buttons and t-shirts.

On his way from Columbus to Dayton, McCain came with his wife, Cindy, along with Ohio campaign chairman, former U.S. Senator Mike DeWine, and State Senator Steve Austria. Without giving time for questions, McCain hit the main points of his Ohio campaign, including giving $1,000 individual tax credits, winning the war in Iraq, and increasing healthcare for veterans. McCain also aired his intention to “clean up corruption and pork barrel spending in Washington” and invoked former President Ronald Reagan’s name several times when speaking about the economy.

McCain acknowledged that Ohio has traditionally been a critical state to win and that the last time a U.S. president who did not carry Ohio was elected was in 1960.

A smattering of Yellow Springs residents dotted the mostly regional crowd. Local resident Jeff Inslee, who works for the Greene County Republican Central Committee, and his wife, Josie, went to support McCain and to be part of the local fanfare.

“The energy, the excitement of it all is so intoxicating, and it’s important for everyone who is going to vote to go and see all the candidates in the flesh,” Josie Inslee said. “We’re so lucky to be able to do that here.”

Yellow Springs youth Mary, Fielding and Fisher Lewis were craning their necks over the crowd to get a view, and local resident Branson Pyles said he snuck into the restaurant early as an “infiltrator.”

According to Young’s owner Dan Young, DeWine has stopped at the restaurant several times on his own campaign trail and organized Thursday’s event. Politically, Young’s “doesn’t support anything but ice cream cones,” Young said, adding, “but it’s always fun when a major candidate comes here and brings attention to promote the Yellow Springs area.”

The last time a candidate stopped in for an ice cream spectacle was when Elizabeth Dole came to Young’s in the fall 1996 supporting her husband, Bob Dole, who was running for president. Young recalled much tighter security at that event, which occurred later in the campaign, compared to last week’s visit, which was more relaxed.

“That was the busiest Wednesday in February we’ve ever had,” Young said. “It looked more like a day in July.”