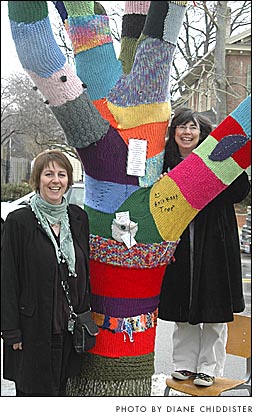 Corrine Bayraktaroglu and Nancy Mellon at the Knit Knot Tree on Xenia Avenue.

You can call it a tree in a sweater, a community crazy quilt, or one more quirky idea from Nancy Mellon and Corrine Bayraktaroglu. Whatever you call it, the knitted art project on the pear tree outside the Emporium seems to have taken the world by storm.

At last count, a feature article on the tree, which went out on the Associated Press wire last Monday, had appeared in 158 papers worldwide, including papers from California to Maine, South Africa to Switzerland. Radio stations in Scotland and England have called for interviews. And no one is more surprised by the publicity than the artists themselves.

“We just can’t believe that a little knitting on a tree is getting so much attention” Bayraktaroglu, a native of northern England, said in an interview last week. “It tickles people’s fancy.”

To Mellon, the “Knit Knot Tree” (name suggested by Joanne McKee) has garnered acclaim because “there’s so much sadness in the world, people like something that’s bright and cheerful and nonsense.”

The Knit Knot Tree started when Mellon and Bayraktaroglu fastened two knitted sections around the tree’s horizontal limb, then began adding more. Day by day, the knitting expanded, until a hodgepodge of vibrant colors and textures crept up the tree’s limbs and down its trunk. Mellon first added new sections by standing on Tim Hackathorne’s chair, then she moved to a stepladder, then to an 8-foot ladder. Squeamish about heights, she finally asked friends to wrap the final knitted pieces around the highest part of the limbs.

After the two women put out a call for others to add to the project, many did so. And others have brought small items, such as photos or poems, that they stuffed into the pockets on the tree’s sweater.

While Mellon and Bayraktaroglu knew they’d have a good time on the project — they always do have a good time working together — they didn’t expect so much community enthusiasm. They are thrilled by it, the women said.

“When we started, people would see me out there and they’d stop and talk. Some people stopped their cars and came running across the street,” Mellon said. Part of the huge response can be linked to the tree’s location in front of the Emporium, she believes, a place she sees as “a community spot, a place for listening and talking.”

Mellon and Bayraktaroglu are quick to offer that they aren’t the first to put sweaters on trees. They were inspired by Knitta, the name taken by two Houston housewives who in 2005 began wrapping knitting in unusual places — around door knobs, stop signs, or lampposts, for instance. Since then, artists across the country have caught on to this knitted street art.

To Mellon and Bayraktaroglu, the ordinariness of the medium adds to its appeal.

“Anyone can knit,” said Bayraktaroglu. “You don’t have to think of yourself as some famous artist draping Central Park in fabric. It could be grannies.”

Those who want to ponder the nature of art under the Knit Knot Tree should do so soon, since the knitting will be removed in a month. Mellon and Bayraktaroglu have received, as well as praise for the project, some e-mails from those concerned about the knitting’s effects on the tree’s health, and the women want everyone to know that they consulted with tree experts before beginning the project. But the tree could be harmed if the art project stays on during the warm summer months, so Mellon and Bayraktaroglu will cut down the knitting on Arbor Day, then will give it away.

The two women, who are active in the Yellow Springs Arts Council, have no shortage of creative ideas. Before the Knit Knot Tree, they found international fame once before, when they launched the ChamberPot Gallery in the bathrooms of the local train station two years ago. And each month they create 15 or 20 small “found art” items that they hide downtown for people to discover during the Third Friday Fling.

“The ideas just fly out,” when she and Bayraktaroglu get together, Mellon said. “We have more ideas than we can handle.”

What gratifies the two women most, they said, is that the Knit Knot Tree, and the ChamberPot Gallery before it, brings attention to Yellow Springs. Both are fairly new to the village, and they love living here. Mellon and her husband moved to town four years ago, after reading about Yellow Springs in the book, 100 Best Small Art Towns. Bayraktaroglu moved here six years ago with her husband, who works at Wright-Patterson Air Force Base.

Having received so much from the village, they want to give back. And as well as good ideas, they have a vision, they said. While they are gratified that more and more out-of-towners have begun coming to Yellow Springs as a destination experience, Mellon and Bayraktaroglu believe much more could be done to market the town as an arts community.

Progress is being made, they believe, especially with a recent collaboration between the Yellow Springs Arts Council and the Arts Center Steering Committee, which have recently opened a joint office downtown.

But more needs to be done, the women believe. And it’s safe to say that Mellon and Bayraktaroglu will continue to do their fair share, and beyond, in letting the world know that Yellow Springs is a distinctive arts community.