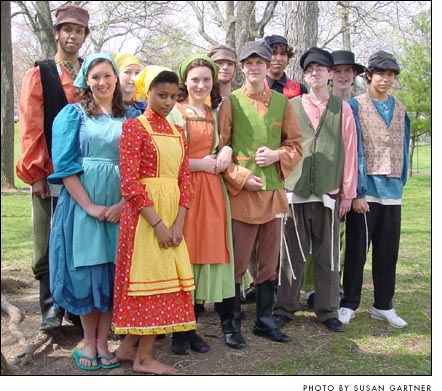 It takes a village to raise a ‘Roof’

Randomly select anyone from the extensive list of participants — parents, students, staff, store owners, volunteers and professionals — who contributed to this year’s Yellow Springs High School spring musical, Fiddler On the Roof, and they will tell you about the enormous undertaking of this mega-scale production. From constructing a dance-sturdy stage extension to creating a train station sign in Russian to costuming 55 cast members, residents from Yellow Springs and surrounding towns are coming together on stage and behind the scenes to show it takes a village to raise a Roof.

Performances will take place at Mills Lawn auditorium on Fridays–Sundays, April 25, 26 and 27 and May 2, 3 and 4. Friday and Saturday performances are at 8 p.m., and Sunday matinees are at 2 p.m. Tickets are $7 for adults and $5 for seniors and students.

Set in a Russian Jewish village at the turn of the century, Fiddler on the Roof tells the story of Tevye, (played by Peter Keahey) a milkman who struggles to maintain his family and religious traditions in the face of daunting political and social forces. The Broadway play won five Tony awards, and for 10 years held the honor of longest-running musical.

The extensive community involvement with the play starts with the “pit,” a group of volunteer musicians coordinated by local music teacher Yvonne Wingard and Mary Beth Burkholder.

“It’s a very large group,” said Wingard. “John Faas, the music director, is one of those “the more the merrier” kind of directors. We have two eighth graders and four high schoolers playing with us. It’s hard to get students in the pit because they’re almost all in the show!”

Most of the adult pit orchestra members do not have children involved in the production, according to Burkholder.

“They’re doing it because they’re community-minded or love to support the -theater program. Having a live orchestra is so special,” she said.

Costuming such a large cast was a daunting task for costume designers and coordinators Ali Thomas and Judy Parker.

“There’s about 100 costumes that we’re doing and another 35 that the kids supplied themselves,” said Thomas. “We’ve had about 12 volunteers. Judy’s been doing specialty costumes, but the stuff you have to cover everybody in, like aprons and headscarves and shawls — I cut those out and just gave those away to people to sew.”

Actors needed boots that were good enough to dance in, according to Thomas, who said that Tim Sontag from Xenia Shoe & Leather made boot tops for cost.

“We had to make mezuzahs (the small rectangular case on the doorframe of a Jewish home) and a chuppah (the canopy in a Jewish wedding),” said Allin, “and Johanna explained what they were and what they looked like.” When they needed 36 beer steins that looked like pewter, Georgia Solomon provided the replicas.

“It truly is a community effort,” said Allin.

With a total of 70 kids involved from both the middle and high schools, the production will have two stage managers, high school seniors Megan Kaplon and Jaimie Paul.

“It’s really hard to get every single person to rehearsal on time,” said Paul. “I don’t like to be on stage, but I like to tell people where they need to go.”

One of parent Debra Wilburn’s responsibilities is the layout of the program, a task that allows her to see some of the quiet ways in which community members contribute, she said. For instance Debbie Henderson supervises the advertising and organized the Curtain Warmer fundraiser, which takes place Saturday at the Arthur Morgan House Bed & Breakfast, thanks to proprietor Suzanne Oldham, who donated her B&B for the annual event.

“Theresa Mayer [president of the YSHS Theatre Arts Association] gathers information and takes head shots of all the kids,” said Wilburn. “We put the photos in the program so people can see the youth of our community. Mary Beth Burkholder gathers info about the pit crew, then I lay it out and edit it.”

Wilburn, Mayer, and Libby Rudolf painted the proscenium, an archway depicting the small Russian village of Anatevka where the play takes place.

How did they fit such a large cast on stage?

“We built an extension for the stage,” said Jerome Borchers, treasurer of the arts association, “so all the actors can come out and dance. Tom Auten is the tech director. Jim Mayer did most of the construction. We designed it together.”

Parent Gary Zaremsky constructed the carts, and Mike Reichert did the benches, which had to be strong enough to dance on, according to Borchers.

“Andrea wanted the kids to get as much education as possible about the culture of the Jewish people of this time and place,” said Burkholder, who said that in February on a Friday night, Jay and Randi Rothman hosted a Shabbat for the entire cast and crew.

“We did a vegetarian potluck,” said Randi Rothman. “The kids had a chance to see us light the candles and say the prayers. Andrea also had the kids who were Jewish interview their grandparents or older people in their family to get some stories about where they came from.” After dinner, the kids shared these stories.

How does such an epic production finally come together? Auten likens the experience to a quilt that’s been ripped apart and needs to be stitched together.

“It’s a lot of everyone doing their part,” she said, “and then their part brings the whole back together.”

* The author is a free-lance writer and photographer for the News.