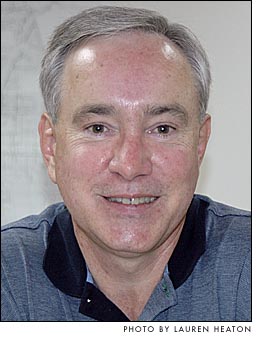 John Weithofer began work as the interim Village manager last Thursday, June 19. He replaced Eric Swansen, who left this month after two and a half years with the Village.

As interim Village manager, John Weithofer has observed a few things since he first came to the village three weeks ago. Yellow Springs is an ambitious village of 3,700 that provides services and tackles projects generally found in cities of 15,000 or more, he said. Yellow Springs has excellent municipal staff led by a strong Village Council, all of whom seem overwhelmed by the amount of work before them. As with the ebb and flow of every community, Yellow Springs happens to be on a down cycle, but it’s only a matter of time and careful planning to put the village back on the uptick toward another era of health and vitality.

Such are the insights of an experienced municipal manager who has observed the village since early June. Weithofer formally accepted Council’s appointment as interim manager at Village Council’s meeting last Monday, June 16. He began the position last Thursday, the day after former Village Manager Eric Swansen left for his new job as city manager of Sunnyside, Wa. Weithofer has a month-by-month contract, to be finalized at Council’s meeting on July 7, scheduled to end in about six months but could perhaps extend to as many as nine, he said.

“If after six months the Village needs additional time, we’ll see how it works out,” he said.

At 55, Weithofer has 26 years of experience with the city of Miamisburg, where he began as assistant city manager and spent 18 years as the city’s manager before retiring in 2006. During his tenure, he helped lead a community-wide effort to redevelop the Miamisburg Mound facility in anticipation of the 1993 closure of the Department of Defense production facility that supplied 2,400 jobs in the community. The effort led by the Miamisburg Mound Reuse Committee, still chaired by Weithofer, has brought in 20 companies who employ 700 people.

Though Miamisburg is a larger city which has grown intentionally in recent years to about 20,000, the experiences coordinating governmental and community groups toward the common purpose of redevelopment for economic growth has application in Yellow Springs, he said. The loss of local industries and perhaps also Antioch College, which Weithofer said is part of the fabric of the town, has presented a challenge to the community to provide the tax base to pay for the services it desires.

While it was too early in his position with the Village to provide official recommendations, Weithofer suggested that Council consider focusing on a few key projects in order to make time for a thorough search to find a qualified Village manager.

“That’s probably the most critical decision Council has in the next six months, and it’s a challenging market to find good managers,” he said.

Weithofer hoped that the Village could hire a search consultant and begin advertising the position before the end of the summer. The best-matched candidates will likely come from the Midwest, which should be a key recruiting area, he said.

Other priorities Weithofer perceived for the Village within the next six months include establishing a Village management and staffing plan, improving the Village wastewater treatment plant, managing infrastructure grants for the Center for Business and Education and providing leadership on how to address the closure of Antioch College. Once those things are in motion, he said, then Council could also consider addressing internal priorities such as renewing the Village’s health insurance contract, the waste contract and next year’s budget.

The interim manager is a difficult position, Weithofer said, because “you’re in the middle,” with neither the institutional memory nor the ability to see results. But Weithofer likes the challenge of managing municipal projects and operations, and he was attracted to the look and feel of the community, as well as intrigued with the particular circumstances Yellow Springs faces in making choices about what to do next and how to get it done.

“The Village has a lot of neat but complex projects that need direction and a lot of work,” he said. “I’m here to make sure we have the capabilities to keep them running.”

Weithofer lives in Miamisburg with his wife and plans to continue to offer his municipal management services on an interim or part-time basis, he said. Though he plans to stay in the Dayton area, he would not consider staying on with the Village, he said, preferring to maintain his status as a short-term contract employee.

Before he left the Village, Swansen agreed to be available by phone and e-mail to provide continuity and answer questions. Weithofer has used that invitation three times already, he said, and generally feels that the commitment of a strong Council and community make Yellow Springs a place with a good deal of potential.