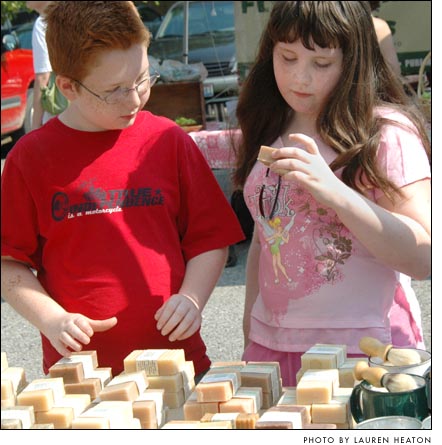 The lure of plump eggplant bulbs and summer squash peeking out from their crates and the sunburst of dahlias and daisies reaching out to be picked is enough to keep a shopper quite busy at the Yellow Springs Farmer’s Market every Saturday morning. But it doesn’t take much, with the familiar faces and friendly smiles, to get beyond just buying produce. In its nearly 30 years in the King’s Yard parking lot, the farmer’s market has become an opportunity to learn all kinds of things one doesn’t think to ask in the grocery aisle. Which variety of garlic is best for pesto? After the honey is collected, what can you make out of the comb? How can raw milk be purchased legally in Yellow Springs?

With many new vendors who supply the market with a wide array of products to try and to learn about, the market is growing to keep up with a keen interest residents have in eating locally, knowing how their food is grown and who it is who grows it. What better way is there of finding out than to ask the growers who know?

Tucked into the back corner of the market, Peach Mountain Organics farmers Doug Seibert and Leslie Garcia have been raising vegetables, herbs and flowers on their 37-acre farm in Spring Valley since 1992 and have a wealth of knowledge about the growing seasons in southern Ohio. Picking through the garlic baskets on Saturday, local resident Alice Robrish, who is trying to raise garlic in her garden at home, asked about growing hard- versus soft-necked garlic for making pesto. The answer she got was about more than just pesto.

Some people think there are just two types of garlic, hard-neck and soft-necked, Seibert said. But he has learned that with the variable Ohio weather, such as this year’s unpredictably wet summer that supported Polish Jenn and Killarney red, the standby varieties don’t always do so well. Instead, Peach Mountain grows nearly 100 varieties of garlic just to ensure that some of them will survive whatever unseasonable drought, frost or flood is thrown their way, Seibert said.

Just then Ellis Jacobs came by looking for good tomatoes. Seibert explained that the variety in the front did the best this year and spoke again about the reasons why.

For Seibert, whose farm survives on sales at the Yellow Springs Farmer’s Market and to restaurants such as the Winds Cafe, educating customers who are interested in the growing process is “really what it’s all about,” he said, referring to his “crazy way of making a living” solely off of farming.

“It’s what I read about, what I think about all day every day, and this is the only chance I get all week to expound on what I do,” he said.

Dan Accurso, who has sold organic bison meat at the market for four years, talks easily about Running Bare Ranch, which he and his wife Debi operate near the Clark County Fairgrounds. A retired school teacher with a long-time fascination with the old West, Accurso began breeding in 2001 and now has 28 head of bison raised totally naturally on filtered well water without herbicide, pesticide or growth hormone. Committed to sustainable agriculture, he believes bison are the healthiest for consumption because humans have not interfered with their genetic code by overbreeding them.

Running Bare sells ground bison meat, steaks, roasts, sausage and jerky, as well as organic, free range chicken and duck eggs, which Accurso raises as a natural fly, mosquito, tick and pest control on his farm. According to Sarah Husk, who buys a pound of bison meat and a dozen eggs from Accurso every week, the eggs from Running Bare are the best she’s ever tasted.

“These eggs have really orange yolks, and they just taste better than any other I’ve tried, and I’ve tried them all,” she said.

Running Bare may have the best eggs, but White Mountain Honey Farm has the best raw honey. Beekeepers Jeffrey and Lisa Wilson and their children Crystal and Jesse have been selling bee products at the farmer’s market for five years from their farm on Lewis Road in Xenia. The Wilsons have 85 hives, each housing 60,000 bees, located in Yellow Springs, Xenia, Bellbrook and the surrounding areas that help to pollinate farmer’s market vendors Peach Mountain and Jackson’s Farm, as well as Breezy Acres, Berry Hill and Countryside Apple Orchard.

At the market, according to Lisa Wilson, White Mountain sells a light, mild spring honey made from the locust blossoms, a slightly darker summer clover honey, and a bold flavored fall honey made from the abundant and pungent goldenrod, the primary floral source that blooms in the fall. Wilson and her children also harvest the honeycomb regularly to make body lotions, lip balm and handmade soaps in 33 scents, including orange blossom, pear berry, coffee, a scent called “love story,” and a garden mint speckled with herb bits that smells just like a patch of fresh spearmint.

The Wilsons make their living raising bees organically because they feel it is a truer, less superficial way to live by the seasonal cycles while being respectful of the environment, Jeffrey Wilson said. And being at the farmer’s market, Lisa Wilson said, is an extension of that connection to the community members, who now feel kind of like family to her.

Suzanne Patterson, who brought organic kale, squash, basil and wildflowers on Saturday, has been selling at the farmer’s market from Rabbit Run Farm in Yellow Springs since about 1990 for the opportunity to talk with shoppers about something that’s important to her: how to grow food sustainably. She also just likes visiting with friends and meeting new people who will enjoy her produce.

“You can go to the grocery store, but you don’t have anyone to talk to,” she said.

Yellow Springs natives Bob and Ann Holly, who have brought excess vegetables from their garden to the Farmer’s Market for at least 25 years, just love coming to see and talk with people.

“In some ways we just do it for the fun of it — you get acquainted with the people, and everybody seems to know each other,” Ann Holly said. “This farmer’s market is the best farmer’s market in the whole world,” Bob Holly said, “and I’m not kidding about that.”

Recently, newer vendors have been attracted to the Farmer’s Market too. Michele Burns and John Dewine, who purchased the 24-acre Dewine farm from his grandparents Dick and Jean Dewine last year, are selling organic vegetables and will soon have apples, peaches and pears from their orchard and business, Flying Mouse Farms.

This is also the first year at the market for Yetunde Rodriguez, who sells her handmade liquid body washes and skin products under her Nigerian name, Taiwo. She has been making chemical-free products for 10 years and uses only ingredients she would use on her or her children’s skin, she said.

This year’s Farmer’s Market shoppers can also purchase raw milk, cream and butter for the first time, through a three-farm herdshare program coordinated by Amy Batchman, of Patchwork Farm in New Lebanon. Although the sale of raw milk in Ohio is illegal, the herdshare program allows customers to purchase part of a cow and thereby become the farmer who is entitled to a portion of the dairy’s yield. Tim Whiteman and Dan and Nancy Kremer, of E.A.T. Food for Life Farm in Yorkshire, partner with Batchman to produce raw dairy, handmade cheddar, feta and mozzarella cheeses, as well as organic vegetables and free-range organic beef and chicken.

Gluten-free baker Janice Risteff and her husband, Kime, are selling divine treats from their stand, “Spoonin’ without Gluten” for the second year this year. Janice, who loves to bake but has wheat allergies, has experimented with a variety of organic rice flours, xanthan gum and other wheat-free ingredients to create fluffy zucchini bread, blueberry bundt cakes, tofu fudge chews and their signature Sister Norma’s heavenly sour cream coffeecake.

The 69-acre Brickel Creek Organic Farm in Jamestown is in its second year also, providing strawberries, sunflowers, a variety of greens and vegetables and edible flowers, including calendula, nasturtiums, marigolds and bachelor buttons. Chris and Susan Fecteau are transitioning their property through the Greene County Conservation Wildlife program to an organic farm with a pond, quail buffer zone and 500 trees.

The Yellow Springs Farmer’s Market began as a public service for vendors who wanted to sell excess produce from their local gardens, according to Roger Hart, who at the time owned King’s Yard and its parking lot. Hart’s daughter, Cathy Christian, who has owned Ye Olde Trail Tavern for 22 years and recently purchased the yard, still allows the vendors to set up for free and the informal market to generally run itself because she believes in the health and environmental benefits of local, organic food, she said.

Michele Burns, of Flying Mouse Farms, has taken on the task of organizing the market and trying to sign up vendors on a first-come, first-serve basis. The number has grown in the last five years to about 23 at the peak of the season, which can tend to crowd the parking lot. Several vendors have discussed the possibility of relocating to a bigger space with more parking, like the South Town Farmer’s Market that began last year in the large parking lot of Dollar General on Thursdays from 4 to 8 p.m. But the spot in King’s Yard is conveniently located at the center of town, and Christian hopes the market stays.

Though the crowd gets thick with kid strollers and dogs around 10 a.m. most Saturdays, most shoppers seem to know how to stand to the side to visit and maneuver their way, green beans and corn in hand, to the person with the cash belt. The experience for an increasing number of those who shop regularly at the farmer’s market is nothing but praise and relief from the conventional shopping doldrums.

According to Cathy Adams, who bought vegetables from Peach Mountain on Saturday and also goes to South Town every Thursday, farmer’s markets are the only way to shop in the summer.

“They say the average vegetable travels 1,700 miles before you buy it at the store,” she said with wide eyes. “I hate going to Krogers — I get all of our produce right here during the summers.”