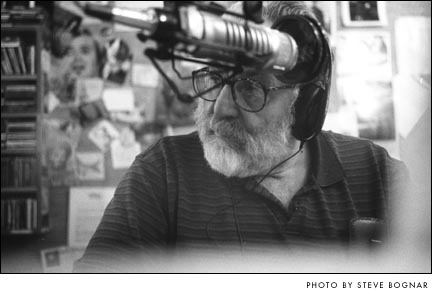 Longtime Yellow Springs resident Steve Schwerner, who has hosted a jazz program on WYSO Public Radio for 50 years, since he was an Antioch College student, will host his last WYSO show Tuesday, Sept. 30, at 8 p.m. Schwerner and his wife, Nancy, will move to Brooklyn soon to be near their children and grandchildren. Schwerner is pictured above in the WYSO studio hosting his program.

For the Schwerners, life after YS, WYSO

Correction – An article in the Sept. 25 News on Steve Schwerner’s long career as a volunteer host on WYSO misstated several items. Former WYSO General Manager Steve Spencer was hired in 1998; three years later, he replaced several local volunteer-hosted shows with syndicated programming. After Spencer resigned in 2004, he was replaced by Interim Station Manager Joe Colvin, who was replaced in 2006 by Paul Maassen.

When he was a student at Antioch College, Steve Schwerner was sure to get co-ops that would bring him back to his hometown, New York City, so he could hang out in jazz clubs as much as possible.

“I have seen [John] Coltrane live between 150 and 200 times,” he said. “I used to think I was at the Half-Note in the Village every night, but I have heard so many other jazz fanatics say the same thing, I realized that it would have been impossible. The place only held about 90 people.”

Now, after more than 50 years of hosting jazz radio shows from Antioch and the Dayton Public Schools, Schwerner and his wife, Nancy, will soon move back to New York for good to be closer to their two daughters, Cassie and Greta, and their grandchildren. His final appearance on Dave Barber’s “Jazz Night” on WYSO will be on Tuesday, Sept. 30, at 8 p.m.

“The beauty of Antioch College was that I could study in this lovely village and work in New York City,” he said in a recent interview. “Antioch allowed for a variety of experiences.”

Local jazz lovers, neighbors and friends will miss the Schwerners for, among other things, their knowledge, humor and community spirit.

“I was really sad to learn that Steve and Nancy are leaving town,” said local filmmaker Steve Bognar, who was on the Antioch faculty for a short time with Schwerner. “Steve was a colleague and a mentor at Antioch College and someone I so deeply admired, Nancy too. I learned so much from him about how to be an engaged person in a community.”

According to Schwerner, he started hosting his own jazz radio show on the campus station, just three to four days after matriculating from Antioch in 1955. His hall advisor, Terry Herndon, had built the radio station.

“The original station could only be picked up by wrapping an antenna wire around the pipes,” he said. “I’m still not sure how that worked, but the station could not be received off campus.”

He moved over to WYSO when it was started in 1957.

Schwerner graduated in 1960 and returned to Antioch as dean of students in 1976. In the interim, he earned a Ph.D. in education and psychology from New York University. He became involved in the civil rights and anti-war movements, taught at the high school level and eventually became the director of the counseling center at New York’s Queens College.

It was during this time that Schwerner’s brother, Mickey Schwerner, gave up his life for the civil rights movement. Mickey, a Congress of Racial Equality (CORE) field worker was killed, along with CORE workers James Chaney and Andy Goodman, by members of the Ku Klux Klan on June 21, 1964, near Philadelphia, Miss. The case was heavily publicized and is believed by many to have been a pivotal point in the civil rights movement.

Upon his return to Antioch, Schwerner hit the microphone and turntable once again, doing special shows on WYSO for several years. Eventually, he shared a regular spot with faculty member Warren Watson on a show called “Alternate Takes.” That gig lasted for about 25 years, until Steve Spencer became general manager of the station in 2002 and eliminated much of the local programming, including their jazz show and one hosted by Dave Barber.

After the 2002 cancellations, Schwerner and Barber were invited to create programs for the Dayton Public Schools’ station WDPS (89.5 FM), broadcasting out of Patterson High School. When Spencer was fired in 2006 and Paul Maassen was hired to replace him, an opportunity opened up for Barber to host a jazz show again. He invited Schwerner to help, and Schwerner has been hosting “Jazz Night” live about once a month ever since, while still doing a WDPS show two days a week in the morning.

Schwerner attributes his love of music to listening, as a kid, to his parents’ recordings of political folk music. When he started clarinet lessons, he became interested in jazz clarinetists Benny Goodman and Edmund Hall. Later an uncle of a friend gave him a 78 rpm recording of Charlie Parker playing “Blues for Norman” as a part of the “Jazz at the Philharmonic” series. For the next three hours he did nothing but play Parker’s two-minute solo over and over, he said.

“After that, I became a jazz fanatic,” Schwerner said.

He listened to the “Symphony Sid Show” on local New York radio every night, writing down the names of tunes he liked and working to earn money to buy the recordings. Eventually he telephoned “Symphony Sid” Torin and asked him if he could hang around in the studio while he did the show. Torin invited him up and, over about a dozen sessions, he received his jazz education whenever the master was off-mic.

After becoming dean of students, Schwerner was free to teach any course he wanted. He was dean for 15 years, then became a professor again, teaching cultural interdisciplinary studies, the civil rights movement and jazz history. He fully retired in 2003. According to Schwerner, his “History of Modern Jazz” was the all-time favorite course of Antioch students. On October 4, he will be conducting an all-day workshop on the “History of Jazz” for the Nonstop Liberal Arts Institute.

In recent years, Schwerner has been active in efforts to save Antioch College, most recently as a member of the Antioch College Continuation Corporation, or AC3. Nancy, after retiring from a long career as librarian at Clark State University, went onto the board of Home, Inc., among other activities.

For his last final WYSO show, in addition to the Charlie Parker number that started it all, Schwerner said, “I will pull out music that I have loved over the years and that is important to me.”

According to Bognar, he has successfully lobbied Mayor Dave Foubert to proclaim Sept. 30, the date of Schwerner’s last show, “Steve and Nancy Schwerner Day in the Village of Yellow Springs.”

“So many people in the Miami Valley are jazz fans because of Steve’s presence on the radio.” Bognar said. “On Tuesday nights we would go to the church of jazz.”