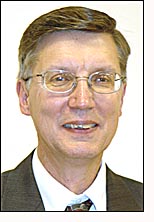 In response to a question regarding how he would expand Yellow Springs’ tax base, candidate for Village manager Randy Bukas said he would first take good care of existing businesses, then seek to attract new ones.

“You have to go out and see how they’re doing,” Bukas said regarding current businesses. “You have to promote your businesses because it’s easier to keep someone here. You first work on retention.”

In order to keep from overburdening citizens and businesses with taxes, some growth is necessary, candidate for Village manager Randy Bukas said, adding, “If you don’t grow, you die.” However, he emphasized that growth needs to be managed, and that municipalities should plan any growth in the light of a visioning process or a comprehensive plan.

Bukas was the second managerial candidate to speak to villagers at a public forum. A week ago the first candidate, Mark Cundiff, the current planning director of Troy, met with the public after a daylong interview session with Council members and five villagers chosen by Council, who are Steve Conn, Benji Maruyama, Ellen Hoover, Maureen Lynch and Deborah Benning. Bukas followed the same format on Monday, Oct. 13, and about 25 people attended. The third finalist for the job, Nancy Benroth, the current assistant village manager in Bluffton, will meet the public next Monday, Oct. 20, at 7:30 in Bryan Community Center rooms A and B.

The current manager for Germantown, Ohio, population 5,000, Bukas has about 30 years of experience in the administration of small towns. The administrator at Germantown for more than three years, he previously worked for seven years as village manager in Whitehouse, Ohio, and before that was head administrator in Lodi, Wis., where he also served as treasurer and clerk. He has a masters in public administration from Roosevelt University in Chicago.

While he takes ultimate responsibility for projects, Bukas described himself as having a “hands-off” approach when working with department heads. However, he said, he’s always available to step in if problems arise.

“I’m looking for more of a challenge,” Bukas said, in response to a question as to why he seeks the Yellow Springs job. He sees his challenge, if he gets the job, as “trying to move things forward” in three major areas, Bukas said, including the situation at Antioch College, moving ahead with the Center for Business and Education and making necessary repairs at the Village wastewater treatment plant.

“Higher education is a top priority,” according to Bukas, who said he believes “the Village has a great reponsibility to keep the college here.” However, he said, if Antioch College does not reopen, the village should work with the university to consider how best to use the buildings.

Germantown, where Bukas now works, is an example of a town in which a new business development “sucked the life out of downtown,” according to Rick Donahoe, who said, “In my mind, Germantown is exactly what I don’t want to happen here.”

The new development took place before his tenure in Germantown, Bukas said, adding that he agreed with Donahoe’s assessment that the venture had hurt downtown. “I’m a big downtown promoter,” he said.

“That’s why you need planning,” Bukas said, referring to Germantown’s declining downtown. “That’s where Council has to agree on where you want to go.”