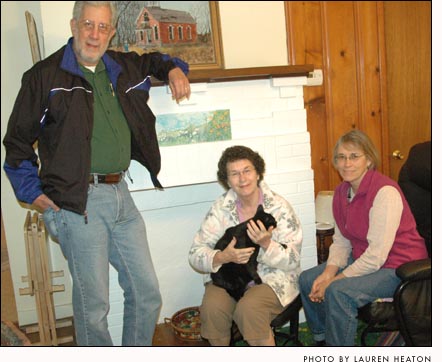 Home, Inc. Board President Stan Bernstein, left, and Executive Director Marianne MacQueen, right, are shown with Home, Inc, resident Sharon Mohler, in her Xenia Ave. home. The organization will host a fundraiser this Saturday, Oct. 25, at the Emporium.

Home, Inc. knows where heart is

Correction
• This story about Home, Inc.’s 10th anniversary contains several errors. The group’s endowment started out at $200,000, but was spent down to $70,000 after the purchase and renovation of a rental property on Xenia Avenue. Operational funds from the Ohio Housing Finance Administration for Home, Inc. run out at the end of the fiscal year in June 2009.

Sharon Mohler is an artist to her core. The small Home, Inc. house she rents at the south end of Xenia Avenue is a gallery for the sycamore studies in colored pencil, oil paintings and clay figurines she creates in her basement studio, which, she says with a deep smile, is the biggest space in the house. Her local cleaning business brings in just enough money to allow her to do what she loves, and to do it in Yellow Springs, her home for the past 15 years.

In some ways Mohler is not a typical Home, Inc. client because she came to the affordable housing land trust for help finding a house to lease (instead of buy). But Mohler also exemplifies the type of resident that Home, Inc. wants to enable to live in Yellow Springs because she is committed to being a member of this community and she has chosen her own way of making that happen. After 10 years of operating in Yellow Springs, according to Home, Inc., Board President Stan Bernstein, one of Home, Inc.’s main goals remains to free people of the burden of working for the homes they live in so that they can instead be in a home and work at living in their community.

“People own houses, houses don’t own people,” Mohler said. “You can become a slave to taking care of that house.”

In enabling a wider variety of people to live in the village, including those whose ample talents and proclivities lie in less financially lucrative fields, the community is afforded a richer substrate for all of its residents to enjoy and grow from, Home, Inc. supporters believe.

“With Home, Inc., we create a partnership with homeowners to build community,” Bernstein said.

Just as Home, Inc. attracts a diversity of clients, so is the organization itself supported by a diverse network of funding sources and volunteers, according to Marianne MacQueen, Home, Inc.’s executive director. Many of the land trusts around the country exist in either rural areas where land is cheap enough to subsidize, or in larger cities whose municipality funds them directly, such as San Francisco or Burlington. While Yellow Springs is too small for local government funding and too desirable for cheap land, its residents are nonetheless interested in living with a diverse mix of neighbors of all persuasions and backgrounds. And so Home, Inc., toughs it out and does what it can to fill that need for the community.

“We’re like salmon going upstream,” MacQueen said. “But people want this because of their concern for the community, because they want to have a full, rich community with the economic, cultural and racial diversity that is the richness of the human family.”

Home, Inc. has provided 13 homes throughout town, one of which is a rental and six of which were built last year as part of the Thistle Creek development off of King Street. The group gets project funds from Ohio Housing Finance Administration and other grants, and its operating funds come from membership fees, fundraising, lease fees and a steady income from OHFA’s Community Housing Development Fund, a nine-year grant which in the past two years has risen to $30,000 a year and is set to expire at the end of 2008.

Organizers are looking for ways to supplement the lost revenue, but according to MacQueen, securing OHFA funds will be more competitive with federal funds declining in the current economy. And Home, Inc. wants to preserve and grow its small $200,000 endowment for future operating revenue, Bernstein said. And so the organization will still be in need of support, which could also come through a donation of land, which once incorporated into the land trust model, remains an important component of an affordable house for future Home, Inc. buyers.

“It’s a good organization and it has grown significantly in many ways since I first joined the board,” Bernstein said of his six-year tenure, which will end at the end of the fiscal year.

Fundraising has become easier for Home, Inc. since its beginning, when the issue of affordable housing on the Village-owned Glass farm on King Street threatened to divide the community between those who felt the municipality should donate its public assets and those who felt the land should be purchased. The unstoppable Home, Inc. organizers found another way to get their mission accomplished by seeking grant monies to buy individual properties for renovation or building. These homes were then sold through the land trust model, in which homeowners buy the home and lease the land for a nominal fee.

Home, Inc. allows people making less than 80 percent of the area’s median income, or $48,000 for a family of four, such as many nurses, teachers, artists, social workers, and residents with disabilities, to set down roots in the community.

“Having people be able to work and live in a community makes a huge difference because they’re a lot more invested,” MacQueen said. “We need to be a community with roots as well as wings, which means we need to have families who are able to be here for generations. It’s important for a healthy community to have a sense of history and to attract new people too.”

Tawn (Jackson) Singh is one of those residents with local roots. She grew up here, graduated from Yellow Springs High School in 1989, and decided with her husband, Jai Singh, that they wanted to own a home and raise children in Yellow Springs, where they can care for Tawn’s elderly father. But they found that the homes on the market that didn’t need a lot of renovation were out of the budget range for Tawn, a secretary at Wilberforce University, and Jai, who spends the work week in Lima where he teaches high school. So while they don’t own the land for the Home, Inc. house they are planning to move into this year, they now have a small yard for Tawn to garden, and a group of neighbors who have shown a genuine interest in getting to know the couple — a welcome change from the aloof culture of apartment living, she said.

Though financing is always a challenge for Home, Inc., the organization has enjoyed more widespread support in recent years, and morale is high, according to Bernstein. Many people have provided support for Home, Inc.’s efforts, including early stewards and board members Ilse Tebbetts, Sue Clauser, Trudy Abrams, Deborah Benning, Roger Lurie and Tony Bent; grant writer Susan Stiles; volunteer architect Patty Rice; long-time volunteer coordinator Al Schlueter; and over 150 volunteers who have provided invaluable construction labor to help reduce the cost of the homes, MacQueen said.