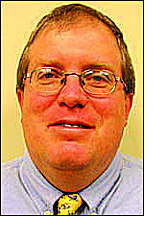 In a region in which many industries are closing and people are losing jobs, Yellow Springs can prosper by, rather than trying to be like other communities, focusing on the qualities that make it unique, according to a finalist for the position of Yellow Springs Village manager.

“You need to capitalize on what makes Yellow Springs Yellow Springs,” said Mark Cundiff, the current city planner of Troy, one of three finalists for the job, who spoke to about 30 villagers during a public forum Tuesday evening.

Capitalizing on the uniqueness of the village means “starting with a vision,” created with significant community participation, Cundiff said, then creating a plan with “mileposts along the way” that shows how to reach the community’s goals.

“There is no magic planning formula,” Cundiff said. “What you are planning for has to be what the community wants to become.”

Yellow Springs’ strengths include residents who are highly involved and well-educated, Cundiff believes. In his current position in Troy, he and colleagues talk about “how to attract the creative class” to the city, he said, but this is not a goal the village needs to pursue.

The sense of community in Yellow Springs is also one of its strengths, Cundiff said, referring to having read about the community’s response to the recent damaging windstorm.

“I can tell you, in Troy, people didn’t come downtown and play music,” he said.

He was attracted to the job of manager for Yellow Springs after visiting the Village Web site, Cundiff said, finding there Village Council’s goals for 2008 and information about the visioning task force.

“It seemed a good sign that Council had taken the time to write down goals,” he said. “And a visioning committee shows that the town is thinking ahead. This seemed like something I’d like to be a part of.”

The planning director for Troy, a city of 22,000 for the past seven years, Cundiff previously worked as city manager of Greenville, Ill., a town of 6,400. He had previously been assistant city manager of Sidney, Ohio, and before that worked in planning for Woolpert Associates. He has a masters in applied behavioral science with a concentration in community development and planning from Wright State University.

Cundiff is the first of three finalists for the job of Village manager who will visit the village in the next two weeks. Cundiff spent most of the day in town, initially having a lunch discussion with five villagers selected by Council members, then taking a tour of town, and next an interview with Council, followed by the public forum. The second candidate, Randy Bukas, the village manager of Germantown, Ohio, will visit Yellow Springs next Monday, Oct. 13, and follow the same schedule, meeting with the public at 7:30 in rooms A and B in the Bryan Community Center.

In response to a question about his success bringing jobs to towns in which he’s worked, Cundiff cited a public/private economic development partnership in Sidney in which he took part. That partnership worked to both bring new jobs to town and to retain existing businesses, he said, describing how the city used a revolving loan fund to meet the needs of local small businesses and ultimately keep them in town.

In his job of manager in Greenville, Ill., he attempted to attract new businesses to the town’s commerce park, but the effort was not successful, he said.

In Greenville, he faced the challenge of working with a Council that was highly polarized, Cundiff said, stating that he attempted to ease the situation by helping each side see the other side’s viewpoint. Ultimately, he said, the problem did not improve because the opposing sides couldn’t communicate, according to Cundiff, who said he “replayed meetings in my mind as to how I could have done things differently.”

In response to a question regarding his experience with sustainable energy choices, Cundiff replied that in Troy he is part of an effort that is researching the use of wind turbines. He is less knowledgeable about solar power, but is interested in learning, Cundiff said. He pointed to the work of the village’s Electric System Task Force as “a step in the right direction” in exploring alternative energy sources.

While he has no direct experience with the “greening” of a community, Cundiff said he is interested in smart growth and sustainability.

In response to a question regarding whether the job of Village manager would be “big enough” for a person who has worked in a much larger municipality, Cundiff said he believes that Yellow Springs faces considerable challenges, and that being its manager would prove plenty big enough.

“I like working as a team. I like people. I’m not afraid to ask questions or to question the status quo,” Cundiff said, adding that the village’s “spirit of open debate and of people working together” attracts him to the job.