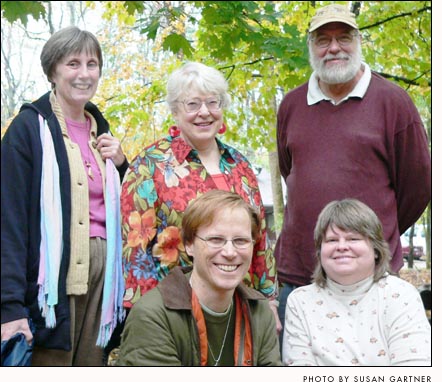 The Heart of Joy Folkschool, which has been quietly simmering on a back burner, is ready to be served.

“It’s come from a lot of people,” said artist Carolion, one of the initial organizers of the school. “It’s been cooking and bubbling for months.”

A living local history folkshop on the “Early Days of Yellow Springs” will take place Friday and Saturday, Oct. 17 and 18, at the Glen Helen Outdoor Education Center. Registration and local history dramatics will take place Friday, 7–9 p.m. Classes and activities are scheduled on Saturday, from 10 a.m. to 6 p.m. (including lunch and supper), followed by old-timey music and dancing from 7–10 p.m. Cost is $5 for young folks (kindergarten through 12) and $10 for middle folks (18 and over). Elder folks will be admitted free. For more information, call Carolion at 767-1092 or e-mail grailbear@yahoo.com .

“The folkschool is all about passing along life skills and traditional wisdom,” said Carolion. “It’s about bringing our elders into their rightful place.” Her commitment to honoring elders is reflected in the admission price: in lieu of a fee, elders are asked to bring wisdom, history, and skills to share.

“Around the country they have what are known as folk schools,” explained playwright Kay Reimers, whose contribution to the weekend will be an interactive play. According to Reimers, some schools teach folk arts year round, “passing the skills from one generation to another in a more formal manner.” Organizers of Heart of Joy Folkschool decided to start small with an experimental weekend of activities as a way to gauge the town’s initial interest.

At Friday evening’s registration, participants will sign up for a wide range of classes.

Eric Wolf’s class will address his concern that people have become disconnected from the land and lost valuable skills in the process.

“I’ve offered to teach basic back-to-the-land survival skills,” he said. “How to be more aware of what’s in your backyard so you can eat it if you need to. What’s ‘poor man’s lettuce’? How do you make an herbal tea that will knock out the flu? That’s what I’ll be teaching.”

Suzanne Rudolf is coordinating construction of a nine-patch quilt that will be used as a symbol for the folkschool and a way to advertise future events.

“We’ll teach children and adults how to sew, quilt, and embroider,” said Rudolf, who belongs to the Mad River Valley Chapter of the Embroiderer’s Guild of America. Beginning and advanced students will put together a quilt, approximately 4′ x 4′, with the center square of the nine squares featuring the folkschool logo.

“I think Carolion’s doing a wonderful thing to help people play catch-up with these folk skills that have been misplaced and not valued in the last generation,” said Wolf.

After Friday night’s registration, several local history dramatics will be presented, including a production by Reimers.

“The scene is going to be a town hall meeting in 1863,” said Reimers. “Everybody who wants to participate will receive a piece of paper with a line or two written on it.”

The meeting’s agenda will be whether or not to allow the railroad to come through town. Historical figure Judge Mills will ask to hear opinions and audience members will read from the many points of view that were expressed at that time including Reimer’s favorite — “A railroad is the devil’s instrument!”

Robin Jordan-Henry will contribute a piece about the Conway colony, the community of runaway slaves that came to Yellow Springs in 1842 and included her great, great grandmother, Julia Gwin.

“She was a child on this extremely dangerous journey,” said Jordan-Henry, who will present the reading from a child’s perspective.

Also on Friday, William and Phillipa Gay will present the Mockingbird Theatre Medicine Show from their traveling theater wagon, which will be parked outside the Outdoor Education Center. Then on Saturday afternoon, William will host an old-time music jam and teach the tunes to accompany dances from the 1850s and 1860s that Phillipa will teach — or “call” — that evening. Local musicians Daniel Taylor and Karl and Deborah Colon will join in the fun.

“We’re going to have several different styles of education going on at once,” explained Carolion of the overall set-up. “Some of the instructors will need to have a set number of people in their class. They’ll teach a very specific thing for one or two hours.” Other instructors prefer to just be there sharing and having people gather around them. While Carolion teaches bread-baking in the kitchen, for instance, Sandy Morris will stop by groups that are quietly working and tell stories of the community’s history.

In addition to signing up for classes, there will also be a sign-up for chores. “People will have to help with the cooking and sweeping and cleaning up,” explained Reimers. “That’s part of the communal experience. You all pitched in and did what needed to get done.”

Organizers view this and future folkschool events as more than just the history you read in books.

Just like the soup being served for Saturday night’s supper, the nourishing ingredients for Heart of Joy Folkschool come from its many participants.

For more information, go to heartofjoyfolkschool.blogspot.com.