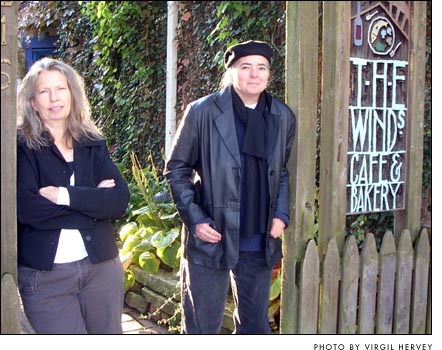 Mary Kay Smith, left, and Kim Korkan, owners of The Winds, which was singled out in Budget Travel magazine’s article about the ‘10 Coolest Small Towns’ in America, are surprised at the attention the restaurant is receiving.

This hot little town is Coolsville

Is there anyone among us who does not think Yellow Springs is cool? Now Budget Travel magazine has confirmed this distinction in its September issue by naming the village one of the “10 Coolest Small Towns” in America.

“These towns all have fewer than 10,000 people -— but they can rival larger cities when it comes to good food, culture, and quality of life,” the article’s tickler reads. Local businesses that were singled out in the section on Yellow Springs were No Common Scents, La Llama Place and The Winds Café & Bakery. Also earning mention were the Dharma Center and the Knit-Knot Tree.

“Although the college was forced to close this summer because of financial problems, Yellow Springs is thriving,” the article states. “The main drag, Xenia Avenue, is lined with shops, cafés, restaurants, and galleries.”

According to the Budget Travel writer Peter Mandel, Yellow Springs made the list because it is “a beacon for artists, activists, and creative thinkers.” To illustrate that point, Kim Korkan, who with Mary Kay Smith owns The Winds, is quoted in the article as saying, “You can breathe here and feel very comfortable expressing yourself.”

Around town, villagers appreciated the recognition.

“I agree totally,” said Cathy Phillips, manager at the Emporium. “That’s why I live here.”

For YS Kids Playhouse Creative Director John Fleming, the article could be helpful in letting people know about the village’s unique qualities.

“It’s nice to see some uplifting news,” Fleming said, when stopped on the street. “The more people who hear about it, the more who will come for our cultural events.”

Chamber of Commerce Director Karen Wintrow recently took copies of the article to San Antonio, Texas, where she and Mark Crockett represented the chamber in the Dayton Development Coalition’s efforts to entice employees from Brooks Air Force Base to follow their jobs to the area as a part of the BRAC realignment.

“It just sets us apart,” Wintrow said regarding the article. “The fact that we are one of the ten ‘coolest’ points out that we are different.”

The chamber is highlighting the honor on the homepage of its Web site, including a link to the article on the Web.

“This is a nice bonus that has brought us pride,” Wintrow said. “It is something to promote.”

No Common Scents owner Patty Purdin, whose shop is highlighted for selling “more than 250 varieties of herbs and spices from across the globe,” said she had spent an afternoon during the summer being photographed and interviewed by the magazine’s reporter. According to Purdin, the magazine editors learned about Yellow Springs from someone who comes here regularly to visit a relative.

Purdin only learned that the article had come out when one of her customers told her she had read it in the magazine.

Over at The Winds, Smith had much the same experience, she said. She started getting calls from friends who had seen references to the article all over the Internet.

“I really didn’t expect much,” she said in a recent interview. “But even now, weeks after the article came out, customers are talking about it.”

Donna Denman, who is on the board of the Dharma Center, said, “I was surprised and delighted. One of our members picked it up and saw that we were mentioned.” In the article, the Dharma Center is described as “a Buddhist retreat draped in Tibetan prayer flags.”

According to Denman, it is unusual for a town of 3,700 to house a Buddhist meditation space, much less one that offers three different Buddhist traditions, those of Tibetan, Zen and Vipassana.

Interviewed recently, Budget Travel Senior Editor Justin Bergman said he floated the story idea in an e-mail to the magazine’s staff and regular freelance contributors with the criteria for making the list. The magazine wanted towns close enough to an airport, so they could be visited on a day trip, he said. They were also looking for places that had some kind of edge to them, as opposed to cutesy places. They sought towns that had a cosmopolitan ambience in a small community, with art galleries, good restaurants and boutiques. They were looking for the “cool” factor.

“It’s all about the vibe,” Bergman said, “the tolerance for the new and different, the arts, the hipness factor. Yellow Springs definitely has that quirky quality we were looking for.”

Check out the article at http://www.budgettravel.com/.