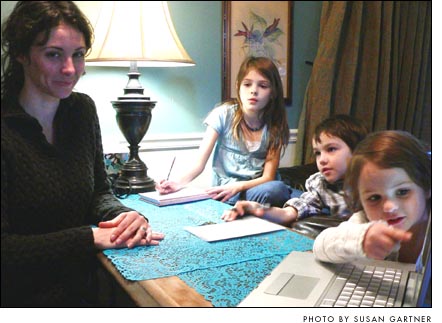 Web site profiles life in village by and for young families

“When the Village Council convenes in the small space at the Bryan Center, most Yellow Springs families are busy fixing dinner, attending after-school functions and extracurricular activities, and bathing and putting their youth to bed.”

So reads a portion of a project report summarizing the experience of one local resident who, like many others, would like to participate in the decision-making efforts of local government but is hampered by family obligations.

The report, issued in December, was not commissioned by a coalition of state agencies. Findings were not gathered by an outside consulting firm and funding did not come from the Yellow Springs tax base. The report was authored by villager Brooke Bryan — fiber artist, Web developer, and student in the Nonstop Liberal Arts Institute — as part of a class project. The class, “Community Journalism: Photography and Oral History,” was taught by photography professor Dennie Eagleson and oral historian Don Wallis.

Bryan enrolled in the class to fulfill requirements for her bachelors in Humanities at Antioch University McGregor. Students were asked to develop a project that would focus on some aspect of community. A mother of three, Bryan went with what she knew.

“I started with the framework of Yellow Springs families,” explained Bryan, as she kept her children — Lily, Kaden, and Vivian — happily distracted during a recent interview. “I think that the concentration of young families in this area is just phenomenal. It’s one of the reasons I’m here.”

After growing up in Kettering and Beavercreek, Bryan moved to Yellow Springs in 1998 to attend Antioch College. A year later, she withdrew in order to focus on her art and start a family with her husband, Carl.

In ’05–’06, Bryan participated in the Leadership Institute of Yellow Springs, a nonprofit organization (no longer in operation) that provided training for volunteer leadership. It was during this training that Bryan learned about the cost of living study conducted by the Yellow Springs Men’s Group.

“The study stated that for Yellow Springs to be successful and vibrant, the community needed to focus on attracting and retaining people who will raise families here,” Bryan said. As Bryan watched the town wrestle with affordable housing and development, a reduction in the employment base, the closing of Antioch College, and the overall decline in the national housing and finance market, she began to question whether the “families with young children” demographic was adequately being heard.

Returning to school in 2007 to finish her degree, the opportunity to address this concern popped up in a creative way this fall, disguised as a class assignment. In October, Bryan launched the Web site: “Why Here/Why Now Project” (http://www.whyherewhynow.org).

“The idea of the project is to try to glean information from the people who have the potential to raise their families in Yellow Springs to see what their needs really are,” explained Bryan. “Who plans to stay, who plans to leave, and what realities are affecting those decisions.” Blending photography, audio interviews, and music chosen to match the cadence and energy of the speakers, the interactive Web site presents each family’s story in a unique, engaging, and avant-garde format.

Participants Caryn Diamond and her family were ideal candidates for the test project, having moved to town from Dayton in March 2008.

“It felt a little like reality TV,” said Diamond, who was interviewed along with her husband, David, and their three children Phillip (7), Eve (3), and Noah (7 months). “It was fun. Brooke was really good at blending in and not interacting. She just followed us around. She took pictures of us eating dinner. It was surprisingly easy to be normal because she was so in the background.”

Diamond and her husband — both professional trumpet players — fell in love with Yellow Springs on their first visit. It reminded them of Boulder, Colo., where they had lived several years earlier before David became a band member of the United States Air Force Band of Flight, stationed at Wright-Patterson Air Force base. They were attracted to the public schools, Glen Helen, the YS Food Co-op, the culture and arts orientation of the town, and the community mindset.

Finding affordable housing, however, was a major concern. After going through the required home-buying process with Home Inc., the long wait for a suitable house conflicted with the couple’s desire to have their oldest, Phillip, enrolled in first grade at Mills Lawn school. A well-timed raise for David and the determination of a real estate agent turned things around quickly.

There was just one more concern.

“We used to live on base housing in Riverside in Dayton and there were so many kids around there,” said David. “We didn’t know if there would be kids to play with. It turns out there are more. We landed in exactly the right neighborhood.”

“There’s an oral history that has been a part of people’s experience in Yellow Springs, but that oral history is not easily passed onto new people,” explained Turner who still feels “new” even after having lived here 10 years.

The subject of affordable housing was also brought up as a major concern for Turner, who has had to take in housemates and live communally, splitting resources and sharing rent, in order to stay here.

Bryan is not only respectful in the way she goes about the business of gathering images and sensitive information, Turner adds, but also knows how to spot the unique details that capture a family’s personality. The interview session, conducted over two days, took approximately two hours; the photography session lasted about 30 minutes.

The “Why Here/Why Now Project” presents more than just an opportunity for Bryan to exercise her Web development and audio recording/editing skills. According to Bryan, participation in the project (“still in the test-pilot phase”) has the potential to increase feelings of membership and collective responsibility for villagers. New understandings about one another can help shape the direction of local organizations to better serve — and attract— families with young children to the village.

Bryan ultimately hopes to interview at least 20 families over six months who embody “a wide array of ages and demographics.” Interested families can fill in the form at http://www.whyherewhynow.org/participate/ or contact her at brooke@whyherewhynow.org.