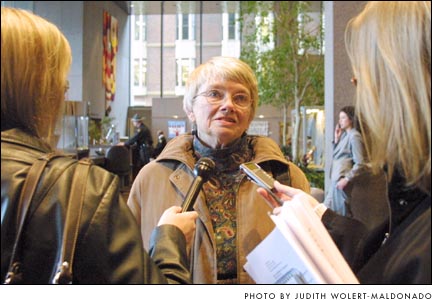 Joan Horn of Yellow Springs gave an interview to NPR and AP reporters before submitting a petition to investigate Antioch University to the office of Ohio Attorney General in Columbus on Friday, Feb. 27. Horn is one of the 15 petition signatories and is an alumna of Antioch College.

Accountability for Antioch flooding sought
On Friday, Feb. 27, a petition signed by 15 Greene County citizens was presented to the office of Ohio Attorney General Richard Cordray. The petition seeks investigation of the factors that led to the closure of Antioch College, along with decisions made since the closing that petitioners see as neglect of the college campus. A little-used section of the Ohio Revised Code allows citizens to call for investigations into nonprofits that may not be serving the public interest.

The recent flooding of two campus buildings, which followed Antioch University leaders’ decisions to not heat the historic buildings in winter, prompted some petitioners to join the effort.

“I want to know who has made these judgments that threaten the capability of the college to be used even if it’s reopened,” said Joan Horn, an Antioch College alumna who went to Columbus to present the petition. “It’s about -accountability.”

The group is represented by Columbus attorney Robert Fitrakis.

The professional effort to dry out Main Building following a flood last month is almost finished, according to Antioch University Chief Financial Officer Tom Faecke in an interview last week. While university leaders had hoped that the effort would take only two weeks, it is ending up taking three, Faecke said.

The professional drying effort, which is being performed by Munters, a global company that specializes in moisture damage and humidity control, will cost “hundreds of thousands” of dollars, Faecke said. The university’s insurance company will cover the cost of the professional drying, according to Faecke, who declined to identify the insurance company.

The drying effort also included South Hall, which had flooded in late December. The South Hall project took a shorter time, and is now finished, Faecke said. The drying out involved pumping large quantities of warm 2 percent humidity air into the buildings, using large desiccant dryers. About 12 dryers pumped air into Main Building, and about five into South.

The drying effort seems to be working, according to Lee Morgan, chair of the Antioch College pro tem board. The board, along with representatives of the Stanley Consultants, who are evaluating the condition of campus facilities, toured Main Building and South Hall the weekend of Feb. 21.

“I was very pleased with the cleanup. They seemed to be doing a very professional job,” Morgan said in an interview last Saturday.

In Main Building, the pro tem board members observed peeling paint and some destroyed ceiling tiles, according to Morgan, who said the north end of the building had largely escaped damage, although the flooding had affected Kelly Hall. The most badly damaged part of the building seemed to be the basement, according to Morgan, who said some basement flooring had been destroyed. The floors are made of cement and the ceilings of dry wall, according to Faecke and Antioch University Director of Public Relations Lynda Sirk last week.

Main Building flooded for an unknown amount of time on Saturday, Feb. 7, after a sprinkler pipe in the Main Building attic burst. The sprinkler system was filled with compressed air that leaked out after the pipe failed, and the system filled with water that then flooded all four floors of the building on the building’s south side. The flooding was discovered by villager Brian Springer, who was walking his dog on campus late in the afternoon. Springer observed water pouring through the ceiling of the first-floor president’s suite, along with water standing in the room. He and villager Tim Noble called the Miami Township fire department, which came to campus and turned off the water, although water continued flooding the building for several hours.

The South Hall flooding, which took place Dec. 24, was also sparked by a pipe in a dry sprinkler system that broke, causing the sprinklers to fill with water and flood. Soon after the flooding, several university workers cleaned up the building, removing wet carpet and some of the flooring. According to Faecke last week, it did not seem necessary at the time to call in professional dryers. However, when Munters’ employees found high moisture readings in the building, the work seemed “prudent,” Faecke said, especially since insurance would cover the costs.

In South Hall, the pro tem board members observed damage only in the building’s east end, the opposite side of the building as Herndon Gallery, according to Morgan, who said the group observed some peeling paint and dry wall damage. In a university clean-up effort following the South Hall flooding, maintenance workers removed all of the wet carpet, an action that would not have taken place had professional dryers performed the clean-up, Morgan said.

It is not known how long the water flooded Main Building on Feb. 7, although Faecke estimated at least several hours. The building had last been checked by university maintenance workers on the preceding Thursday, according to Sirk in an earlier interview. In the instance of both Main Building and South Hall, the dry sprinkler system should not have filled with water after the pipes broke, according to Faecke, who said that the systems’ malfunctioning will be -investigated.

The Antioch College campus has been closed since last June, and buildings have been unheated over the winter. The flooding sparked intense concern among both villagers and college alumni about possible neglect of the campus after Springer put a film of the flooding on YouTube the same evening it took place. About 60 villagers and former Antioch College community members took part in a rally the Monday following the flood, seeking a quick response to the damage and an investigation into why it happened.

No visible evidence of mold has been found in either Main Building or South Hall, Faecke said last week. The university does not plan to conduct air testing after the drying process is completed because Munters specialists have said that testing is not necessary, Faecke said. Munters could not be reached for comment

In an interview this week, mold remediation supervisor Bill Treasure of Turn-Key Environmental Consultants, who oversaw the remediation of Spalt Hall several years ago, said it would be prudent for the university to conduct air testing after the remediation effort has ended. Mold can be present even if not visible, Treasure said, and caution is advisable especially since five days elapsed between the flood and the beginning of the professional dryout effort. Mold can begin to grow after three days, Treasure said.