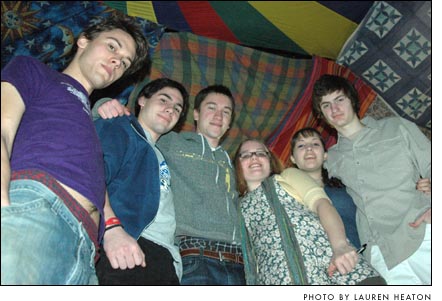 Yellow Springs Youth Council, a new youth advocacy group for local residents, welcomes any and all villagers to its regular meetings on Sundays at 3 p.m. at Pass It On Kids on Dayton Street. At a recent Youth Council meeting, from left, John Hempfling, August Millman, Ramón Bieri, Amelia Tarpey, Crystal Reedy and Dylan Sage talked about community service and the drug dog issue.

It’s 3 p.m. on a Sunday, and many Yellow Springs youth are shooting hoops at the gym, playing SingStar at a friend’s, procrastinating on homework assignments or lounging at home, soaking up the week’s last hours of freedom from responsibility. But one particular group of youth has chosen to take control of this time in a different way. Some of them met on a recent Sunday at a funky, artsy space behind Pass It On Kids to discuss issues they care about in the community and to sign up for actions that begin to address those concerns. No one is asking them to take on these issues — they choose this for themselves.

Yellow Springs Youth Council is what members call the loosely membered but decidedly organized group of local young people who are claiming their voice in the community, wholly separate from the schools. Gathered below a canopy of dozens of colorful quilts, Dylan Sage, Crystal Reedy, Ramón Bieri, August Millman, Amelia Tarpey and John Hempfling, only a small representation of the larger group that has met each week since November, talked on a wide variety of subjects.

The drug dog issue that initially brought them together remains a concern. Last fall school administrators announced they would begin using drug dogs to search the school for illegal substances. Many of the high school students were opposed to the idea, but didn’t have an organized forum to address their concerns. So they got together and created one in the YS Youth Council, which instigated several public meetings with school officials and the community to discuss the use of drug dogs. And now they feel their voice may have finally been heard.

On Sunday, Hempfling gave an update regarding the school board’s acknowledgment last month that while board policy states that the board may authorize the use of canines in the schools, its administrative guidelines have already authorized it. School Board President Aîda Merhemic said in an interview last week that the board will rectify the technical discrepancy in the policy but is not likely to change its stance, which is to give Yellow Springs High School Principal John Gudgel the authority to decide about the dogs, which he said last month he is in favor of using.

But Youth Council members still feel good about their actions. They had been able to express views that the schools and the community might not otherwise have known. And they also feel that their voice may have helped slow down the process and perhaps even convince some school personnel that drug dogs are not the best idea.

“If we hadn’t done anything, it would have happened already,” Dylan Sage said about the use of drug dogs in the school.

And even if the school’s decision isn’t changed yet, the youth agreed on Sunday to submit the drug dog issue for the agenda of the April 2 school board meeting. Group members feel motivated to keep talking about it, to listen to others’ points of view and continue to state their position.

“This group gives youth a real voice,” Sage said. “It’s about youth empowerment and standing up for youth rights.”

Armed with confidence that their views can be heard and that maybe they have the power to change things, the Youth Council tackled the next issue on the agenda, and one that is tied to the drug dog searches: the relationship between youth and local police. The Youth Council initiated a meeting with Yellow Springs Police Chief John Grote, during which the young people talked about what they feel is aggressive treatment by police, and police explained what they feel is irresponsible behavior by teenagers.

Astonishingly, both groups learned something from each other, the youth said. According to Reedy, the youth learned that law enforcement problems in the village can be more severe than they imagined, and that drug dealing in the surrounding areas actually does affect the village. These facts served to contextualize and somewhat justify the late night pedestrian and vehicular stops and questioning the youth had experienced with some indignation toward officers, whom the youth had previously assumed were “harassing” them without just cause.

“We saw that police aren’t trying to target us, but are actually watching out for us, and are doing their best to right the wrongs they see,” Reedy said.

And what’s perhaps even better is that the police also acknowledged that officers have overreacted in particular instances and been more overbearing than certain situations warranted, Sage said.

They felt so good that they decided to throw a pizza party, a “copluck,” to encourage Yellow Springs police and other youth and community members to do similar work to get to know each other personally and try to understand things from the other’s perspective.

As they were on a roll, the YS Youth Council quickly saw that its members held a huge amount of potential to not just talk, but to act on the kind of change they would like to see. Millman listed some of the goals the group has articulated, including installing a bench downtown, creating service opportunities for youth in the village, and instituting a process by which to impart leadership skills to other students who will carry on the Youth Council mantle.

The public bench has been an issue for the youth since last fall, when the bench they often used near the Senior Center was removed due to what some community members perceived as youth creating a disturbance and blocking the sidewalk where elderly residents often need to pass. Millman explained at Sunday’s meeting that having an informal spot where youth can spontaneously meet with each other as well as with the community at large “is really important to us,” he said. And furthermore, attracting young people to the downtown begets a liveliness to the place that, frankly, Reedy said, has suffered since Antioch College closed. The youth propose that perhaps they and their bench could replace some of what’s been lost, and that could lead into one of the group’s other goals, of creating a space in town for youth to gather and hang out.

Using their energy to connect with the community, the young people are also interested in serving seniors, the Glen, the schools and other youth, they said. Millman is coordinating with the Yellow Springs Senior Center to help disabled seniors get their groceries delivered. Bieri is organizing an outreach service in the Glen to help with invasive species clearing, litter removal and facilities maintenance. And in the interest of “closing the age gap,” the Youth Council plans to make the space, opened to them by Pass It On Kids’ owner Miri Nasoff, available to kids of all ages to do art projects, to do school work, or attend youth seminars and music events like the performance by Sage’s band Yazoo Street Scandal that drew nearly 30 people several weeks ago. (The band is planning another event on March 28, which will be confirmed on the Youth Council’s Facebook page.)

“It’s about passing on the skills and giving other youth a voice to express stuff to the community,” Tarpey said.

Youth Council not all youth

Though the Youth Council has thus far found mostly consensus among its members, the group does not represent all the youth in Yellow Springs. Regarding the drug dog issue, for example, at least two courageous McKinney School students, Rebecca Kleinen and Lela Dewey, stated in a letter to the News last month that they were strong proponents of dogs in the schools.

And according to Merhemic, as a member of the school board, she has spoken to a wide variety of students throughout the high school and middle school who say they don’t feel completely safe at school and that drug dogs are the right choice. Those students also say that they don’t have a platform such as the Youth Council to express their views, which often remain silent, Merhemic said.

Though opposition to the drug dogs was the Youth Council’s initial binding agent, Tarpey for one feels strongly that those with differing opinions are encouraged to come to meetings and express their views. She was especially proud of the McKinney youth who wrote the letter because she believes that the power of community lies in the involvement and passion of its members.

“We’re trying to reverse the trend of young people being apathetic about everything, because the future of the Youth Council depends on people not being apathetic,” Tarpey said.

“The future of community depends on that,” Millman added.

Being involved with the Youth Council feeds on itself, Millman said, because the group gives its members credibility, which motivates them to accomplish more of their goals. They want a voice not just to be loud; they want to use their voice effectively to fill existing needs and to build the community they so value.

The Village Human Relations Commission has played a big role in supporting the Youth Council, particularly at the group’s inception. HRC member Don Wallis comes to most of the youth meetings, and the youth want all community members, adults and youth of any age, to know that they are always welcome to come to any of their meetings and events.

“I’ve always seen this like a labor union that provides resources for everyone to have political power, to have agency,” Hempfling said.

The youth understand that even if they don’t always get their way, they will have taken the opportunity to speak and be counted.

“Even if the result of the issue isn’t in our favor, we still get the respect of our surrounding peers — because you feel like you matter,” Hempfling said.