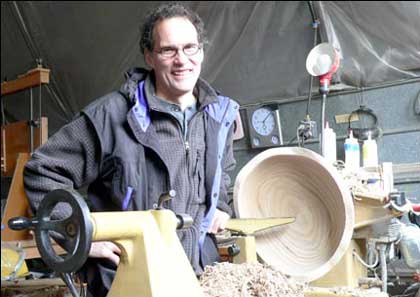 Woodworker, sculptor and architectural designer Tom Hawley works on a sculptural bowl in his workspace at Millworks Business Center. Hawley’s work is on display at The Cannery Art and Design Center in Dayton and the Malton Gallery in Cincinnati.

NEW FACES—This is another installment of an occasional series of articles profiling individuals and families who recently moved to Yellow Springs.

Massive logs lay outside the artist’s workspace, quietly waiting their turn to be carved, chiseled, shaped, shaved, sanded, planed and polished into a gallery of finely finished forms. The logs were recently recovered from a fallen Catalpa tree on the grounds of the Westcott House in Springfield, a unique example of the prairie-style architecture made famous by Frank Lloyd Wright.

Just as a tree grows a new layer of wood each year which is then permanently reflected in its annual rings, woodworker Tom Hawley has grown from his many years and numerous layers of varied work experience. With five years of formal architectural training, 20 years as art director for Ohio and Cincinnati magazines, and assorted jobs hauling and assembling heavy machinery and designing and remodeling homes and businesses, Hawley’s life path can be similarly viewed as a series of “tree rings,” tracing a history that is permanently reflected in his handiwork.

Two years ago, the sculptor moved to Yellow Springs. He was seeking a community that values both the arts and environmental sustainability and he found one in the village, where an unorthodox building now provides him an artistic home. And while various aspects of the village have attracted others to live here, Hawley may be the first to have been drawn to Yellow Springs by a loading dock.

“I kept getting involved in other projects,” said Hawley in a recent interview, describing some of the many interruptions that have plagued his lifelong pursuit of artistic expression. “I moved my workshop three times. Just as I’d get it set up, I’d have to move it again.”

In 1982, after studying technical theatre at Denison University in Granville and architecture at Miami University in Oxford, Hawley traveled the country in search of a job.

“It was during the last big recession,” he said. “I left school for one semester before I finished my masters degree just so I could find out if I could get a job as an architect. No one was hiring because no one was building anything. It was very similar to right now. I ended up getting a job with Ohio Magazine by accident.”

After receiving his masters, Hawley moved to Wilmington where he set up an arts center above an old theater. He worked for Airborne Express, loading planes at night, and did remodeling jobs and taught art classes during the day. One of the remodeling jobs was a deck for the editor of Ohio Magazine who had seen Hawley’s artwork at a time when the magazine was in need of an art director.

After 25 years of interruptions, taking part-time jobs, and working for other people, Hawley decided it was time to get serious about his own art.

Two years ago, while considering Yellow Springs as a potential site to relocate his woodworking/clock-making business (which was then located in Rossburg, 70 miles northwest of the village), he looked at a building in the Millworks Business Center — a 40 x 80-foot unheated, uninsulated, unfinished Quonset hut formerly used for seed storage. Taking in the raw, vast, and expansive space wrapped in corrugated steel with a cement floor and 20-foot ceiling, the architectural designer saw raw, vast, and expansive potential — for himself as well as for his workspace. He also saw a loading dock.

“It was the loading dock that brought me here,” he said with a laugh.

If your “office furniture” includes a table saw, band saw, radial arm saw, lathe, drill press, and jointer -— machinery that weighs between 300 to 500 pounds — a loading dock and the easy transfer of that “furniture” from point A to point B becomes a primary consideration.

“Having a loading dock means I can build big things in this space,” explained Hawley. “If I get a commission for a large clock, like a grandfather-sized clock or even bigger, I can build it, pack it up in a crate, then lift that crate with my pallet jack and load it onto a truck. No one has to physically lift it up and put it in the truck.”

Well aware of the challenges posed by such an unfinished workspace but anxious to get it up and running as quickly as possible, Hawley moved all his machinery into Millworks in one day and rented an apartment on Xenia Avenue.

“I took all the savings I had to try and make it work. I thought, ‘I’m just going to bite the bullet and go for it,’” he said.

Tackling each atmospheric condition with its corresponding challenge, he slowly began transforming the space into something workable.

“There were times during the winter when the wood would actually freeze and I couldn’t sand it. I could cut it, I could make things on the lathe but I’d have to wait for [the piece] to warm up so I could varnish it. Then I ran into all kinds of problems with things cracking.”

And when the temperature outside gets above 70, the space feels like a sauna and offers new challenges. But although his new space comes with weather-related obstacles, he’s glad to have made the move. Hawley has waited a long time to get to a point in his life where he can focus his energies full-time on his craft. His work is currently displayed at the Cannery Art and Design Center in Dayton and the Malton Gallery in Cincinnati and can be viewed on his Web site at http://www.hawleyclockworks.com. But as much as he enjoys crafting his sculptural bowls and fanciful, flight-inspired timepieces, there’s still one passion he has yet to realize.

“I’ve always goofed around sketching solar energy and sustainable habitat solutions. I wanted to create a business where I was doing that when I lived in Greenville, but there wasn’t a lot of need for that kind of thing at that time and I didn’t have a workshop,” he said.

The plan was to start out small, making little wooden sculptures and acquiring the necessary tools, and gradually work his way into the field.

“It just never happened,” he said. “But now I’m thinking there are enough people in that kind of mindset around here. I want to meet them all and find out what they’re doing. I would love getting into that world again.”