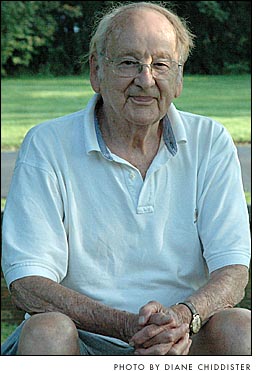 Forced out of his hometown of New Orleans, La., by Hurricane Katrina four years ago, David Fleming has made a new life in Yellow Springs, the home of his nephew, John Fleming. David is shown here in front of his apartment on Union Street.

The glass jar of Mardi Gras beads that sits on David Fleming’s living room shelf reminds him of the city in which he was born, raised and expected to live out his years. But among the many things that Hurricane Katrina upended were Fleming’s plans for his life. Now at Katrina’s fourth anniversary, the former professional dancer and big city dweller finds himself pleasantly surprised to be living in a small town in Ohio.

“I fell in love with Yellow Springs,” Fleming said in a recent interview. “The trees, the flowers. The people always said ‘good morning’ even though they didn’t know me.”

Fleming’s love affair with the village began several months after the September 2005 hurricane. The uncle of well-known villager John Fleming, David was walking John’s dog, Twigs, one morning soon after he came here. A villager recognized Twigs, looked at the unknown man walking him and then said, “Oh, you must be Uncle David.”

Fleming, who was 82 at the time, loves telling this tale of small-town life, where people not only know each other’s names, but the names of their neighbors’ dogs and uncles. Invited by his nephew to come recuperate in the village, Fleming found a place for himself in the family of a small town — now, he’s Uncle David to many villagers.

“The life here has been exceptional,” he said.

But when Fleming first arrived, he desperately needed healing. After enduring several days of nightmarish conditions following Katrina, he was for a year not able to speak of his experience during the storm, and barely able to speak at all. He lost about 30 pounds, and his hands shook.

“I was traumatized,” Fleming said.

Fleming’s nightmare began the day before Katrina landed, when he was called in to work at Memorial Medical Center, one of New Orleans’ foremost hospitals. He had a job in the intensive care unit helping families connect with physicians, and when his sister called shortly after, asking him to leave the city with her to avoid the hurricane’s wrath, they both agreed he’d be safe at Memorial.

But after the hurricane hit on Monday, the hospital lost electricity and running water, and temperatures inside soared to over 100 degrees. Staff, overstretched and overtired, struggled to help patients under impossible conditions, but many were dying.

“The odor was unbearable,” Fleming said.

Two days after the hurricane hit, most hospital staff were evacuated, and Fleming caught a ride out on a boat. But the nightmare only got worse. Taken to a dry spot where many now-homeless people had gathered, Fleming was shaken by the looting that he witnessed at a nearby store. More than anything, he said, he wanted to get back to his apartment.

“I felt I needed to be home,” he said. “I didn’t realize the condition of the city.”

A man in a pickup gave him a ride to a nearby neighborhood, warning Fleming not to go further. But Fleming began walking home. As he walked the water grew higher, until it was up to his chest. Dead animals and humans floated by. Something wound around Fleming’s legs, and, thinking it was a snake, he was terrified.

Amazingly, Fleming made it to his Mid-City home, where he spent a night without food, water or electricity. The next day, three officers in a skiff pulled up to rescue him, and Fleming climbed into the boat. He was deposited at another rescue center, and found himself on a bus to Houston. While he had a niece in that city, he couldn’t remember her married name, and so he was stranded with thousands of others in the Astrodome. But a day later, his niece found Fleming. He stayed in Houston a month, then responded to the invitation of his brother’s son, John, and John’s wife, Louise Smith, to come to Yellow Springs.

Fleming returned once to New Orleans a year later to pick up his ID — which he had been without for six months — and his things. But his friends had left the city, and family members also relocated. There’s nothing left for him there, Fleming said.

He never expected to find happiness in a small midwestern town, Fleming said. He grew up in New Orleans and, as a professional dancer, moved to New York City for many years. Having studied ballet, he took up jazz dancing, and appeared in several touring Broadway shows. He left New York City in 1969 when his mother became ill, Fleming said, and moved back to New Orleans.

A loner by nature, Fleming is surprised by the friends he’s found in the village, including his Twin Coach apartment neighbors Andrée Bognár and Judy Parsons.

He is very grateful to John and Louise and their children, Emile and Belle Pilar, for including him in their family. And he stays busy, volunteering twice a week at the Senior Center and twice a week for Tecumseh Land Trust. He also swims twice weekly at the Xenia YMCA.

He’s in good physical shape, although he keeps a close eye on his diabetes, and he had a heart attack from which he recovered. But he doesn’t feel his age.

David Fleming is grateful to have made a new life for himself in Yellow Springs. But he’s not sure he wants to be everyone’s uncle.