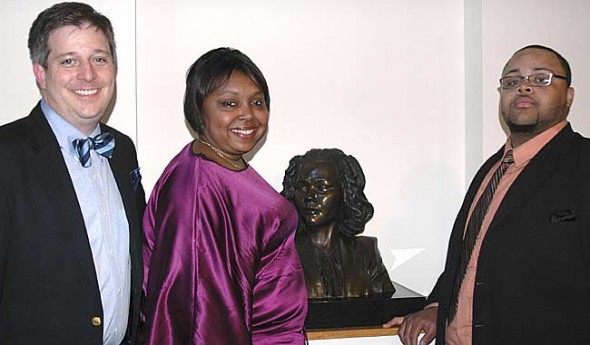 About 50 villagers and members of the Antioch College community attended a celebration of the birthday of Antioch alum Coretta Scott King last night at the Coretta Scott King Center for Cultural and Intellectual Freedom. The event included the installation of a bust of Mrs. King that was created by alum MacLean Tiffany, ’08.

The program began with a welcome from Antioch College Interim President Matthew Derr, followed by a brief history of the King Center by Morgan Fellow Beverly Rodgers, who was the first interim director of the center. Barbara Winslow, ’68, of the Antioch College board of trustees, gave remarks via Skype, and Tiffany spoke on the process of creating the bust.

“Her character helps me to be a better person,” he said of his sculpture, which he described as his “altar to Coretta.”

Dana Patterson, the former director of the center, spoke of her reflections and also read a poem that she wrote to King, bringing some of the audience members to tears. Christopher Smith, a senior from Central State University, sang gospel hymns.

The event concluded with a letter from Coretta Scott King’s older sister, Edythe Scott Bagley, ’47, who also went to Antioch College and persuaded her younger sister to join her. Bagley went on to receive a masters at Columbia University and became a professor at Cheyney University.

In the letter, Bagley applauded the rebirth of Antioch “as it moves into its second phase, making this institution stronger than ever.”